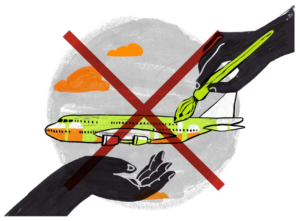 Today, 132 civil society organisations from around the world sent an open letter to National Representations to the International Civil Aviation Organization (ICAO). The letter comes just ahead of the 215th session of the ICAO Council to be held from 29th of October to 16th of November, in Montreal, Canada.

The signatories of the letter criticize the Carbon Offsetting and Reduction Scheme for International Aviation (CORSIA) to be discussed during the Council session. CORSIA does not tackle the climate impact of aviation, and could even lead to further problems, like land conflicts and biodiversity loss due to offset projects and biofuel production, so the signatories.

The letter explains the danger of carbon offsets, biofuels and also points out that technical improvements for aircraft and operations will not be sufficient to overcome aviation’s emission problem.

Reduce aviation instead of greenwashing it

Therefore, the signatories demand ICAO to finally cut the unjust privileges of aviation, on the national as well as the global level, by introducing kerosene taxes, VAT and ticket taxes, frequent flyer levies, aircraft environmental standards, caps on the number of flights and moratoriums on airport infrastructure. The letter refers to the “13 steps for a just transport system and for rapidly reducing aviation”, as outlined in the Stay Grounded position paper.

“In order to address the serious climate crisis, it is necessary to put a cap to aviation, instead of pretending that “carbon neutral growth” could exist in the future. This is because on the one hand, the climate impact of aviation is at least double the impact of carbon dioxide alone. On the other hand, numerous studies and recent history have proven that a decoupling of resource use and emissions from economic growth remains a myth.”
Read the whole open letter as PDF
Tags: Activities, Biofuels, CORSIA, Greenwashing, Offsetting

Opening of the BER successfully sabotaged

Summary of the Webinar “System” and/or “Behaviour” Change?