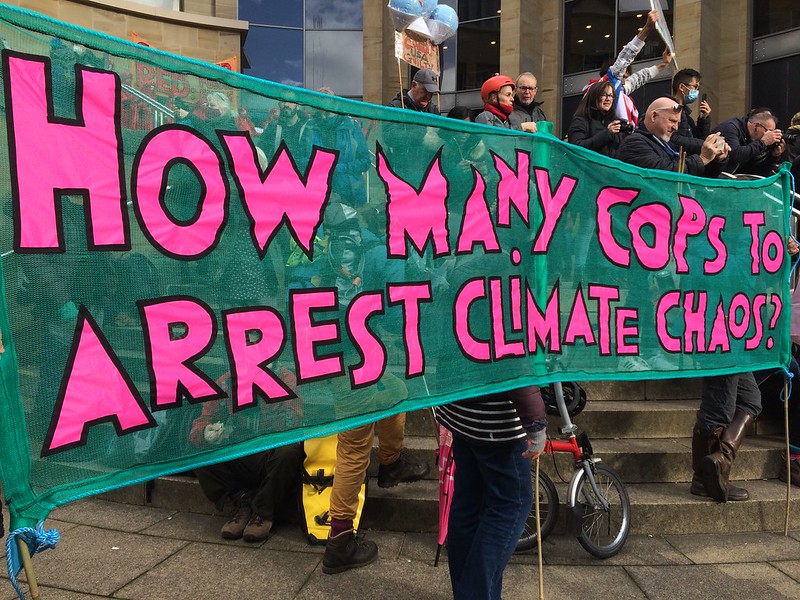 So, the mouldy green dust of the “climate Davos” has settled on another COP “negotiation”. 27 years on and the story is still: can; kick; road. Rather than consigning coal, oil and gas to the past, the first mention in text ever for “fossil fuels” was in a weak reference to removing ‘inefficient subsidies for fossil fuels’ with a ‘phase down’ of coal that doesn’t even mention gas or oil!  COP26, more impotent than important.

RisingTideUK signed this end-of-the-circus statement since it skillfully avoids any “Demands” being necessarily delivered from within the COP process by the “pimps of misery”. Please give it a read as it sums up the perfidious Glasgow Climate Pact. The tragedy is its similarity to the political statement issued in the run-up to COP06 at The Hague in 2000 by the original COP coalition, the worldwide “Rising Tide Coalition for Climate Justice”. This was updated for the birth of Rising Tide proper here. Essentially that you cannot tackle climate chaos without a radical transformation of the global economy and a change of system from one based solely on capital and profit.Toothless Paris Accord voluntary Nationally Determined Contributions (NDC) promises were floated further down that road until next year’s COP. Now the gum-mouthed Pact ‘urges’ countries to set stronger 2030 targets by the end of 2022. By 2030 we need to see at the least, a 45% CO2 reduction on 2010 levels to stay in line with 1.5C. Except, under existing NDCs, even if fully implemented or kept, global emissions will have increased by then and be on course for 2.4C, nearing 3C. 1.5C is barely alive and comatose.
The Maldives’ negotiator noted that “the difference between 1.5 and 2 degrees is a death sentence for us.”The 18th November 2021 was Rising Tide’s 21st birthday, but there was no reciprocal coming of age from the COP clowns, just more carbonated false “solutions” sloshing from that booted can along the increasingly submerged/melted/fire stormed metaphorical road. Article 6 is stuffed with carbon business-as-usual offsetting in all its guises (particularly within the aviation sector via COP sanctioned CORSIA), with the attachment of tradable market mechanisms to “Nature Based” and “Natural Climate” “Solutions” promoting further entaglement in the fallacy of net-zero. This legitimises offsets within NDC’s as Internationally Transferred Mitigation Options (ITMOs). See this explainer.

The radioactive jaundiced face of nuclear power came headbutting in for a last gasp attempt to create brown to green conversion myths too. Low carbon it isn’t.The climate crisis can’t be resolved in isolation from all the other planetary boundaries that are being transgressed. The separation of COP26 and the Biodiversity COP15 in Kunming, China next year seems cynically perverse. If the two COPs were fused it would become clear that the only real solutions are anti-capitalist and the UN would never own that, especially since Sustainable Development Goal 8 is sacrosanct – preserving economic growth.

The UK’s unfunny clownlike Prime Minister heralded several COP side-deals like the one “ending” deforestation by 2030 in the Glasgow Declaration on Forests and Land Use. This looks suspiciously like the one similarly signed (again) by the Indonesian and Brazilian governments in 2014 and we know how that went, with the Amazon Rainforest now a carbon source and participation and protections for local communities and Indigenous peoples still absent.So much for “leadership” as the UK government retains the COP chair until next autumn in Egypt. With huge historical responsibility for emissions, their hypocrisy is exposed in currently supporting a mega gas project in Mozambique; a new North Sea oil field (Cambo); a new coal mine in Cumbria; oil drilling in the Surrey Hills; multitudinous airport expansion and road building; etc. etc. Immediately after the clown’s COP duties he went back to business as usual; taking a private jet to meet with a climate sceptic and refusing to join the Beyond Oil and Gas Alliance – a coalition that commits to set an end date for oil and gas exploration and production in alignment with the Paris Accord.6 years past that Paris Accord; 12 past the broken promises at Copenhagen; and nearly 30 years past the initial 1992 pledge by rich countries; both the inadequate climate finance reparation of $100bn a year and loss & damage promises remain unfulfilled, without any clear intention to provide financial support for the 6.5bn people of the low emitting “Global South” countries and island states about to be literally submerged. Years and years of systemic, structural racism and colonialist betrayal.

As stated by the COP06 Rising Tide Coalition in 2000, climate justice must be front and centre in reducing climate breakdown. It was seen then as radical and marginal. Now thankfully at last that idea has reached mainstream with Climate Justice about acknowledging and addressing that some people are hit harder by the climate crisis than others and that we are all entitled to fair protection when faced with the worst impacts, irrespective of who we are and where we live. We must ensure that this stays prominent by helping the worst off and supporting indigenous communities and the local struggles that should be at the heart of it. That ‘phase down’ of coal must be equitable and include a just transition too.

For 21 years we’ve said that when the tipping point shit hits the fan, people will get interested. The seemingly exponential growth of the climate justice movement in recent months and years is incredible and we must push it further by taking action ourselves, not leaving it to the big NGO’s to set the frame and definitely not to governments and corporations to vomit greenwash over all future planetary life. We need a re-evaluation of where we are as a movement starting with an approach that focuses on land-based resistance movements and the real energy requirements of the population, which centres on our food system.

That task is imagined into reality by people in our streets and fields, not from any COP negotiation or corporate boardroom. Now that really would be growing up and coming of age.For a detailed report of COP26 shenanigan outcomes read on in this summary, with thanks to Nathan, Third World Network updates and Carbon Brief’s overview.