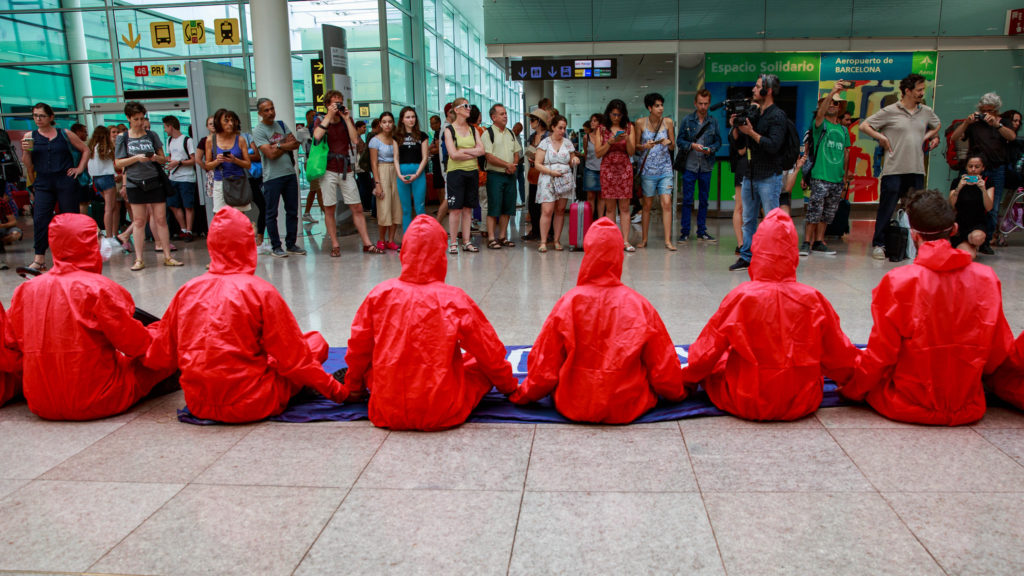 Barcelona, 14th of July 2019 – This morning, dozens of activists in red suits formed a red line inside the Barcelona’s El Prat Airport in order to protest against the planned airport expansion. “Growth of aviation will fry our planet and worsen the problems of mass tourism in Barcelona”, explains Jaume Osete, one of the Stay Grounded activists. The action coincides with the last day of the conference “Degrowth of Aviation”, organized by the global Stay Grounded network and initiatives in Barcelona and Spain.

“Green technologies for aviation will not come to substantial fruition in the next decades ahead, so in order to reduce emissions from aviation we need to reduce aviation itself. Today we draw a red line in order to say: No to growth of aviation and harmful forms of tourism”, says Nuria Blázquez from Stay Grounded. “Especially in countries of the Global North, the number of flights needs to shrink. Flying might seem like a normality to many of us, but on a global level, it is still a privilege for a few: While 80 to 90 percent of the world population have never flown, they bear the brunt of the climate crisis”, says Mira Kapfinger from Stay Grounded.

“We are flying full-speed into climate catastrophe. Flying is not only harmful for the climate: airports create noise and health issues for the local population, as well as to land and justice conflicts”, explains Sara Mingorría from the Environmental Justice Atlas at the University Institute ICTA.

Barcelona – problems of mass tourism will worsen if airport is expanded 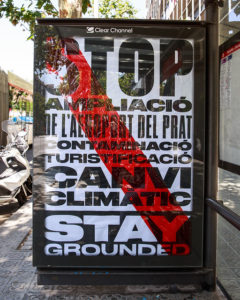 All across the city, alternative advertisments at airport bus stops announce that an expansion of Barcelona Airport is incompatible with climatebreakdown. (Photo: Christine Tyler)

More than 23 million visitors and tourists pass through Barcelona each year. Barcelona is the fourth most-visited European city, the first destination of Mediterranean cruise ships and the seventh largest European airport. “In Barcelona, mass tourism propelled by flights leads to worse living conditions for the local population, like rising rent, precarious jobs and people being driven out of their neighbourhoods”, says Daniel Pardo from Assemblea de Barris per un Turisme Sostenible.

82% of tourists arrive in Barcelona by airplane. It is estimated that this leads to 75% of the carbon emissions from tourism in the city. The planned expansion of Barcelona’s airport is designed to create a demand of an additional 25 million passengers (adding up to 70 million passengers). The operation would include the Girona-Costa Brava airport. “Already now, it is impossible to live with the continuous and intense plane noise, especially during the summer. The number of health issues is rising: problems of infertility, high stress levels due to noise and children at school cannot even concentrate”, says a neighbour affected by the airport.

How to reduce aviation? Results of the Stay Grounded Conference
The conference “Degrowth of Aviation” (12th to 14th of July) brought together 150 people from all over the world, without a single flight being taken. Present were social movements and neighbourhood initiatives from Barcelona, scientists, climate activists, feminist initiatives, NGOs, trade unions, and people fighting for alternatives like night trains and sailing ships. 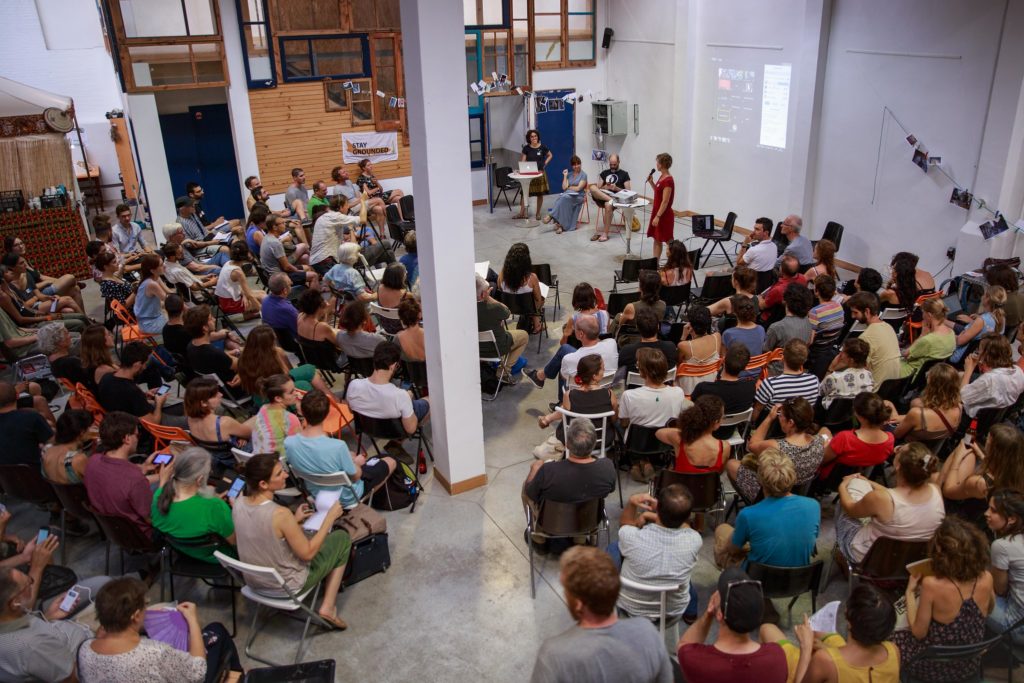 In this conference, seven different possibilities to reduce aviation in a socially just way were discussed: While finally the unjust exemption from kerosene and ticket taxes needs to be cut, additional measures are needed to ensure that flying does not become even more of a privilege of the rich. One proposal is a levy on frequent flyers, meaning that the more someone flies the more taxes they pay. Another is limits on short-haul and domestic flights to reduce unnecessary ones. Last but not least, alternatives to aviation like night trains, ships with renewable propulsion and online conferences should be fostered. Other strategies include stopping airport expansions, and limits to mass tourism. While many of these measures need to be implemented on a policy level, also institutions like universities, municipalities, schools and NGOs can lead the way by changing their travel policies to reduce work travel by plane.

A call to action
The conference ends today with a call to action: “In order to bring about this needed change, a hands-on approach is necessary, and everyone can participate: We need social movements demanding this in the streets, we need direct actions at airports, we need science, institutions, companies and individuals showing the advantages of staying grounded and slow travel, and we need civil society pressuring governments”, concludes Mira Kapfinger from Stay Grounded.

Stay Grounded is a global network to build a socially just and ecologically sound transport system and to rapidly reduce aviation. Almost 200 groups and organizations from all continents support its positions, more than 130 of them are active members.

Find pictures about the conference and the actions for free use (with citation Stay Grounded/Christine Tyler) on Flickr.
A video can soon be found on Twitter & Facebook.