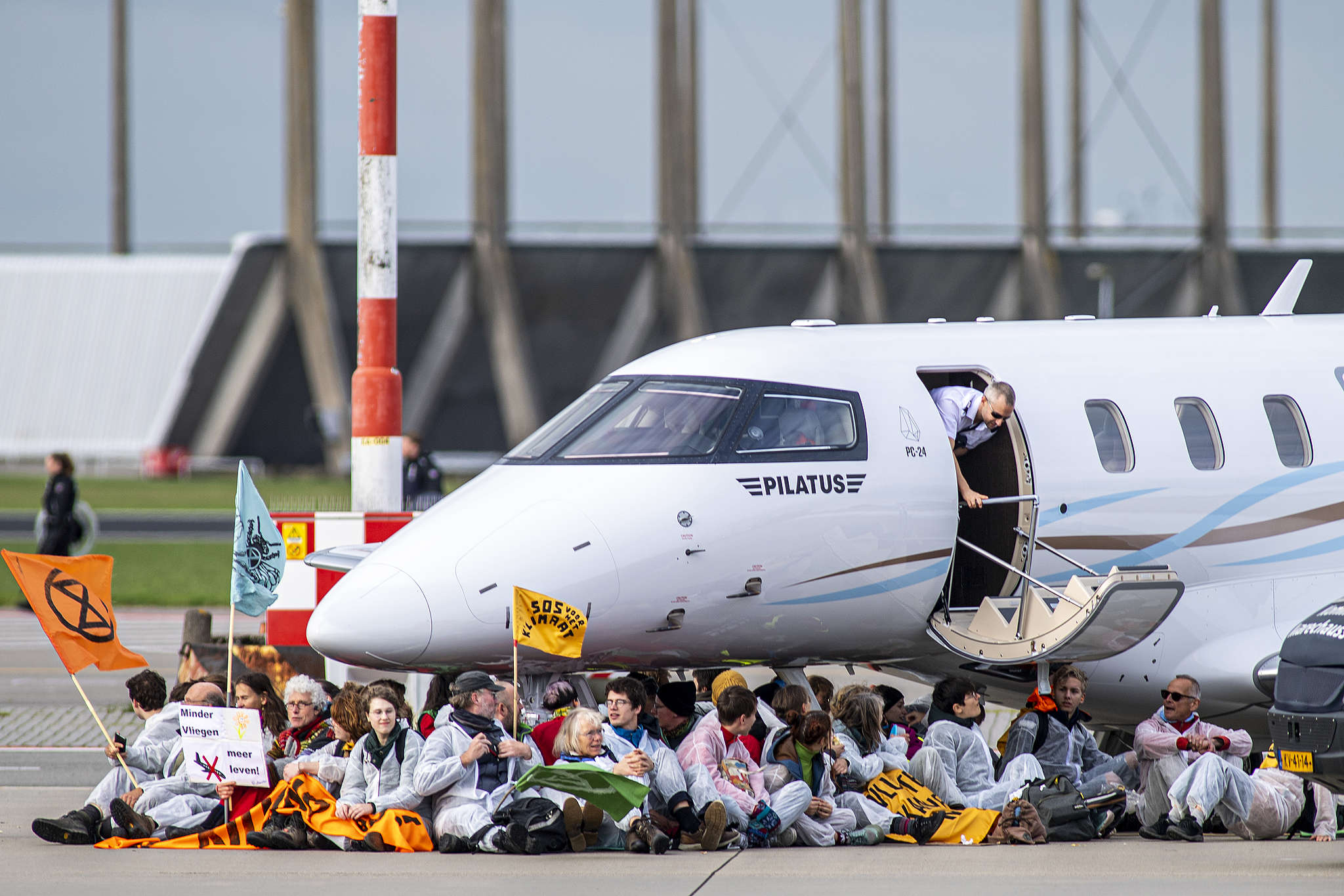 Over 500 Extinction Rebellion and Greenpeace Netherlands activists have stopped private jets from taking off at Amsterdam Schiphol Airport on November 5th. Activists cycled around the area where private jets are parked and blocked the aircraft. The protesters are concerned about the climate crisis and local residents whose lives are affected by the noise from Schiphol Airport.

“We are immensely proud of everyone who took part in this peaceful action today against Schiphol Airport’s immense pollution and unnecessary luxury flights by private aircraft. This protest shows that people are no longer willing to put up with the unbridled growth of the aviation industry. The airport should be reducing its flight movements, but instead it’s building a brand new terminal. The wealthy elite are using more private jets than ever, which is the most polluting way to fly. This is typical of the aviation industry, which doesn’t seem to see that it is putting people at risk by aggravating the climate crisis. This has to stop. We want fewer flights, more trains and a ban on unnecessary short-haul flights and private jets,” says Dewi Zloch of Greenpeace Netherlands.

Schiphol is the second biggest airport in the EU. Private jets fly to and from Schiphol from a private runway and have their own General Aviation Terminal at Schiphol Oost, on the east side of the airport. This morning activists gathered in the forest nearby, carrying flags and banners with slogans such as ‘SOS for the climate’ and ‘Fly no more’. At the same time another group reached the airport from the opposite direction, with bicycles. Police officers eventually removed the activists from the area. This took some time as some of the activists had chained themselves to each other under the parked aircraft.

Tessel Hofstede from Extinction Rebellion says: “Today’s action was about making an important statement. As the climate crisis continues to spiral out of control and climate policies are affecting everyone, aviation and Schiphol Airport are profiting from exemptions and benefits. This is unacceptable. The exemptions that apply to Schiphol and for private flights show exactly where the problem lies in tackling the climate crisis. The wealthy ‘jet set’ is responsible for most of the flights and the highest carbon emissions, and nothing is being done to stop them. It is high time aviation starts complying with the Paris climate agreement. As long as Schiphol continues to pollute, we will continue taking action.”

The issue of private jets garnered public attention recently after several celebrities, including the players of a top French football team, faced criticism for taking ultra-short trips by private jet. Private jets cause ten times the greenhouse gas emissions of a regular flight per passenger and even 50 times more than an average train ride in Europe. Travel by private jet has increased in Europe recently, although GHG emissions from aviation should be dropping rapidly in order to achieve the 1.5°C climate target. In 2018, 50% of all aviation emissions were caused by only 1% of the world’s population.

“According to the UN we need to reduce greenhouse gas emissions rapidly. What Schiphol is doing is totally inconsistent with that. There is no way around it, the number of flights has to go down. If the government and Schiphol won’t take responsibility, we have to take action ourselves to stop this pollution,” explain Zloch and Hofstede.

This protest at Schiphol Airport precedes the international climate summit (COP27), which is taking place in Egypt over the next two weeks. World leaders will be discussing how to tackle the climate crisis, yet aviation pollution is not even on the summit agenda. Greenpeace Netherlands and Extinction Rebellion are determined to change this.