Producing fuel for other people’s planes

A case study on the Omega Green Biofuel refinery in Paraguay

Find this page in Spanish by clicking on the language menu on the top right.

“Omega Green brings more destruction, pain and extinction to our people. The project is dominated by interest and profits of big foreign investors and businesses, while threatening local ecosystems and impoverishing and sickening the peasant and indigenous population.” Inés Franceschelli, co-author and researcher at HEÑOI

Biofuels are a part of the aviation industry’s promise of green flying through technological ‘solutions’ and are therefore being massively promoted. This case study examines one specific planned production site, the Omega Green biorefinery project. Omega Green is the first so-called advanced biofuel refinery in South America. It is being built by the Brazilian company ECB in Paraguay, a small South American country characterised by its tropical forests and abundant water. The refinery, one of the world’s largest to date, aims to primarily produce aviation biofuels in a country with very little demand for them. The main feedstocks for the refinery are expected to be soybean oil, animal fats from the beef industry and pongamia oil. The case study asks: Why is the first advanced biofuel refinery in the region, and one of the largest in the world, being built in Paraguay? And can this be sustainable?

The case study by Heñói – Paraguayan study centre for the promotion of democracy, human rights and socio-environmental sustainability, was commissioned by Stay Grounded together with Biofuelwatch and the Global Forest Coalition. 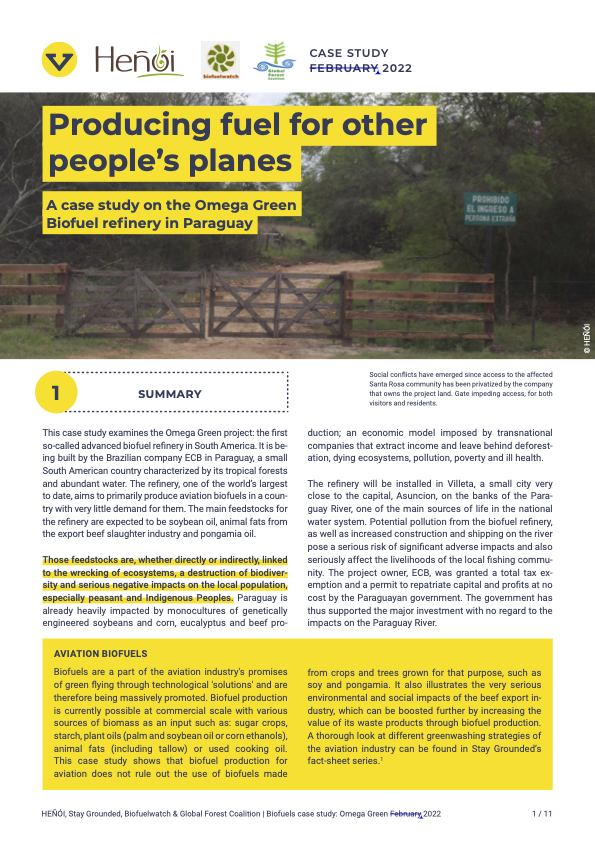 The production of aviation biofuels

Our case study highlights the use of problematic monoculture crops, such as soybeans and the cultivation of pongamia trees, in biofuel production for aviation to be used at the Omega Green biofuel refinery in Paraguay. Biofuel production is currently possible at the commercial scale with various sources of biomass inputs such as: sugar crops, starch, plant oils (palm and soybean oil or corn ethanols), animal fats (including tallow) or used cooking oil.

This study also highlights how tallow from Paraguay’s beef production and export industry is a planned  input for the refinery. We illustrate how the use of this by-product for biofuel production increases its value, thus encouraging expansion of the beef industry and exacerbating serious social and environmental impacts already linked to this industry. Given these impacts, we find that Omega Green is being promoted with the false promise of being a ‘sustainable solution’ to the climate crisis.

The refinery will be installed on the land of the Santa Rosa community in Villeta, a small city near Paraguay’s capital, Asuncion. Villeta lies on the banks of the Paraguay River, one of the main sources of life in the national water system. Social conflicts have emerged since access to the affected Santa Rosa community has been privatised by the company that owns the project land. In addition to impacts from biofuel production and its required inputs, potential pollution from construction and operation of the biofuel refinery, as well as increased shipping on the river pose serious risks to the livelihoods of this local fishing community.

The Omega Green refinery was never meant to satisfy the national demand for aviation fuels, which is comparatively low in Paraguay. The major investment was approved with support of the Paraguayan government and with the economic convenience of its investors in mind. The Paraguayan government even went so far as to give the owner of the Omega Green project, the ECB Group, a total tax exemption as well as a permit to repatriate all of its capital and profits at no cost. Investors were granted favourable conditions for building the refinery in terms of costs and availability of raw materials, but also a guaranteed supply of cheap electricity. In turn, project partners, as well as the government, appear to have had little regard for the serious negative impacts the project would have on the Paraguay River or local populations, especially on peasant and indigenous peoples

In short, the Omega Green refinery will provide fuels for other people’s planes and benefit investors, at the cost of healthy ecosystems, access to land, a sufficient food supply and the livelihoods of the local population.

What needs to be done

As this case study illustrates, substituting fossil kerosene with biofuels is a false solution and highly destructive prospect. The promotion of biofuels for aviation and their subsidies by governments must end and effective regulations to limit air traffic must be put into place instead. In our report on Degrowth of Aviation we lay out how a set of measures could lead to a just reduction of aviation. In our Discussion Paper on a Just Transition we present the idea of how the conversion of the aviation industry must and could guarantee security for the livelihoods of workers. For more detailed information on the greenwashing attempts by the aviation industry, visit our fact-sheet series.

Join our campaign to stop aviation greenwashing and reduce air traffic now!
Get active
We use cookies on our website. By clicking “Accept”, you consent to the use of all the cookies, but they are really just essentials, nothing that tracks you.
Cookie settingsACCEPT
Manage consent