Airports in Mexico: Paving the way for extractivist tourism & mega-projects 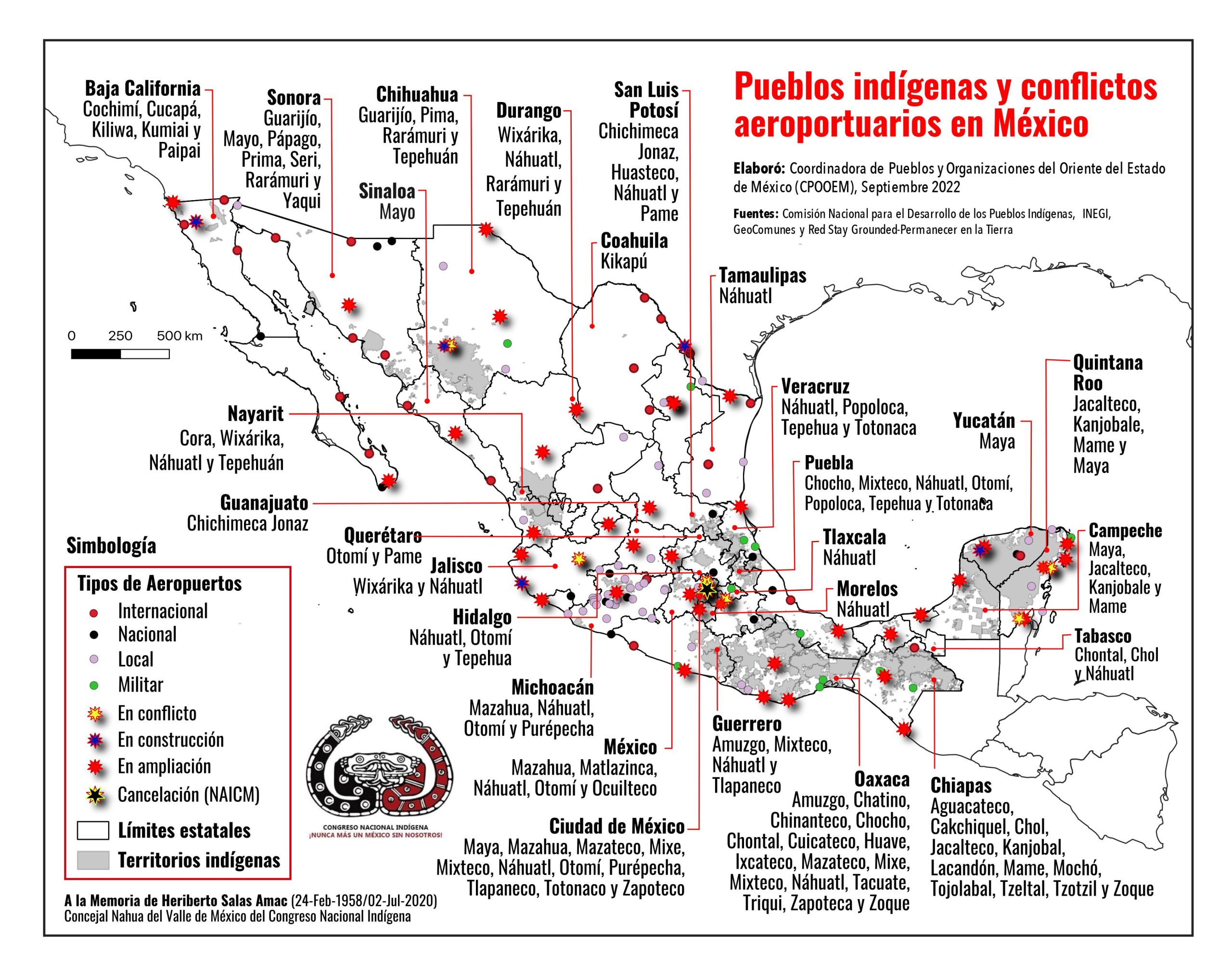 Airports in Mexico: paving the way for extractivist tourism and mega-projects

The new report “Airports and Conflicts in Mexico” by Gustavo Castro (Otros Mundos, AC)/Stay Grounded offers a comprehensive analysis of the aviation sector in Mexico. It includes a categorisation of airports, operating airlines, air passengers’ mobility, current investment plans, as well as interests driving the massive investment in airport infrastructure. The report singles out 50 airports benefiting from the investment of the current administration in aviation infrastructure and identifies 8 related documented socioenvironmental conflicts. A map of airports located within indigenous territories in Mexico, elaborated by CPOOEM, accompanies the release of the new report highlighting the five centuries’ struggle of indigenous peoples for self-determination and autonomy.

Massive investment in airports in a country of grounded travellers

Mexico has one of the lowest rates of flying per capita in Latin America. In a country in which 41% of its inhabitants live in poverty, most of the population would never travel by plane nationally or internationally. Yet, in the new report “Airports and Conflicts in Mexico”, the author Gustavo Castro, highlights the disproportionate importance the current Mexican government places on airports and related investment plans compared to the Mexican population’s needs for or use of aviation infrastructure. 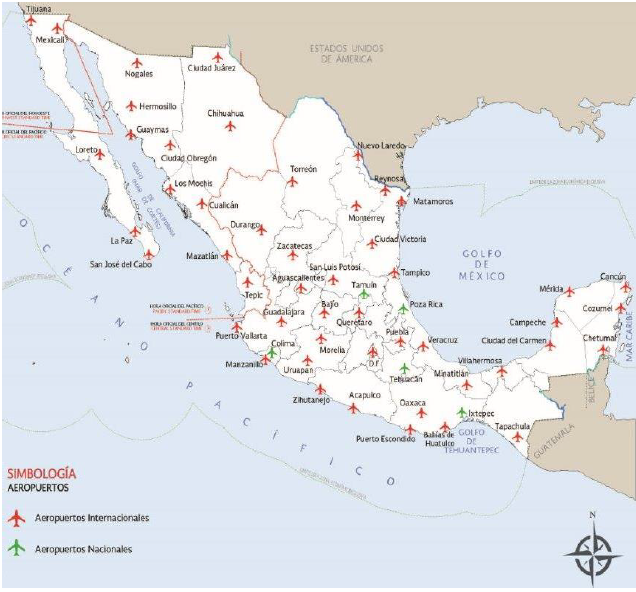 Before the Covid-19 pandemic, the number of air passengers flying into and out of Mexico had been steadily increasing, reaching 97.3 million passengers in 2018. Roughly 46 million passengers flew internationally while 49 million took domestic flights – an increase of 58.8% and 62.5% compared to 2013 levels respectively. In Mexico however, the majority of the population uses terrestrial modes of transport. In 2018, one company alone (the ADO group) transported around 476 million of passengers, representing almost 5 times more than the number of air passengers in the country.

Despite this fact, both the previous and current governments have prioritized huge investments in airport infrastructure. Since 2018 the López Obrador (AMLO) administration has driven new airport investments across the country. In 2019, the airport infrastructure was the sector that most benefited under the Infrastructure National Agreement between the private sector and the federal government. Between 2019 and 2021, 42.458 million pesos went into the ‘improvement’ (and expansion) of 28 airports. During the present administration (2018-2024), investments for 50 airports have been registered.

From the 50 airports under the investment plan, the report describes in greater detail how 40 are, or will be, expanded and modernized, five are under construction, while four have plans for construction, one of which involves a highly contentious cancellation case (Texcoco airport).

Furthermore, after defining what constitutes an ‘airport conflict’, Castro discusses how new projects have triggered emerging socio-environmental conflicts in six of Mexico’s federal states. Adding to the list of conflicts already documented in Map of Airport-Related Injustices and Resistance International Airports of Creel, Guadalajara, Texcoco and Felipe Ángeles in Santa Lucia), the report identifies new conflicts related to the airport projects at the Tepic airport in Nayarit; the Puebla airport; and the Chetumal and Tulum airports in the state of Quintana Roo.

The conflicts are similar in their dynamics and demands. Struggles over access to land and resisting land grabbing, claims for compensation, fighting for the commons (water, land, energy, human labour, etc.), as well as the fight for self-determination and autonomy are the predominant concerns in these conflicts. Moral and physical violence, constant life threats and community division are common too. In one particularly horrific case, the airport conflict in the indigenous territory of the Rarámuri is to blame for the murder of the indigenous leader Antonio Montes Enríquez.

In this report, Castro admits that while some conflicts surely remain unidentified, there are certainly more unaccounted for conflicts out there. As airport infrastructure relies on the continued plundering of the commons, the potential for the emergence of further conflicts is and will continue to be very high.

More than enabling the catastrophic hypermobility of globalised capitalism, airports intensify the extractivist model crucial to capitalism itself. Extractive tourism along with other extractivist mega-projects centered around connectivity and transporation are central to understanding the importance given to airport infrastructure in Mexico. Castro points out that all federal states (except one) have operational cargo airports, with the amount of cargo being transported having increased 47.4% between 2013 and 2018 (910 thousand tones transported).

Not surprisingly, airports in the biggest cities (e.g. Guadalajara and Mexico’s industrial capital Monterrey), those in touristic regions (e.g. Cancún, Puerto Vallarta, Los Cabos and Mérida), as well as Tijuana (the largest border crossing and migration point on the North American continent) attracted the highest public investments between 2019 and 2021.

The most emblematic mega-projects driving the massive investment in airport infrastructure are the touristic Tren Maya, responsible for land-grabbing and displacing numerous indigenous and peasant communities; the mega-tourism project “Barrancas del Cobre”;the Transisthmian Canal of Tehuantepec Isthmus and its industrial cities; the Dos Bocas refinery; the expansion of ports such as Coatzacoalcos, Salina Cruz and Puerto Madero; the southern gas pipeline; tourist complexes; mega-wind farms in the Isthmus; the Riviera Maya Formula 1 Autodrome; and the 19 stations of the Mayan Train.

Another increasingly worrisome phenomenon is the central role of the Mexican army in promoting and managing airport expansion. The army looks at airports as the new frontier for generating revenues to sustain its growing military force. In the example of the airport of Tulum, the report describes how the AMLO administration is creating a new company that will control the airport that will be managed by the military, and its revenues will cover pensions and reforms of the armed forces. This is also happening with the Santa Lucia airport. Both Tulum airport and Santa Lucia airport envisage the construction of adjoining military cities.

International capital continues to use State structures to stay afloat, as the development of airport infrastructure with tax-payers money serves the interests of multinational corporations. Airlines from USA, Europe and Asia represent roughly two thirds of the Mexican market for air cargo. After the conclusion of this report, the French multinational Vinci Airports became the leading shareholder of the Mexican airport operator OMA (Grupo Aeroportuario Centro Norte). OMA falls under the Infrastructure National Agreement with a planned investment of 12,000 million Mexican pesos between 2021 and 2025.

These different forms of extractivism illustrate the manifold consequences of aviation growth and the system that it seeks to serve. In addition to these concerns discussed, the report brings our attention to other threats posed by the aviation industry in Mexico, such as the predicted sky-rocketing demand for land for the production of aviation agrofuels. In Mexico, more deforestation and land-grabbing can be expected as a consequence.

The key takeaway from this invaluable report is that as long as governments and international financial partners continue massively investing in Mexican airport infrastructure for the sake of the military, tourism and extraction of natural resources, we will see an increasing number over communal peasant and indigenous territories.

The full report (only available in Spanish) by Gustavo Castro (Otros Mundos Chiapas, AC) and Stay Grounded can be found here. The map of indigenous territories and location of airports in Mexico is also available for download