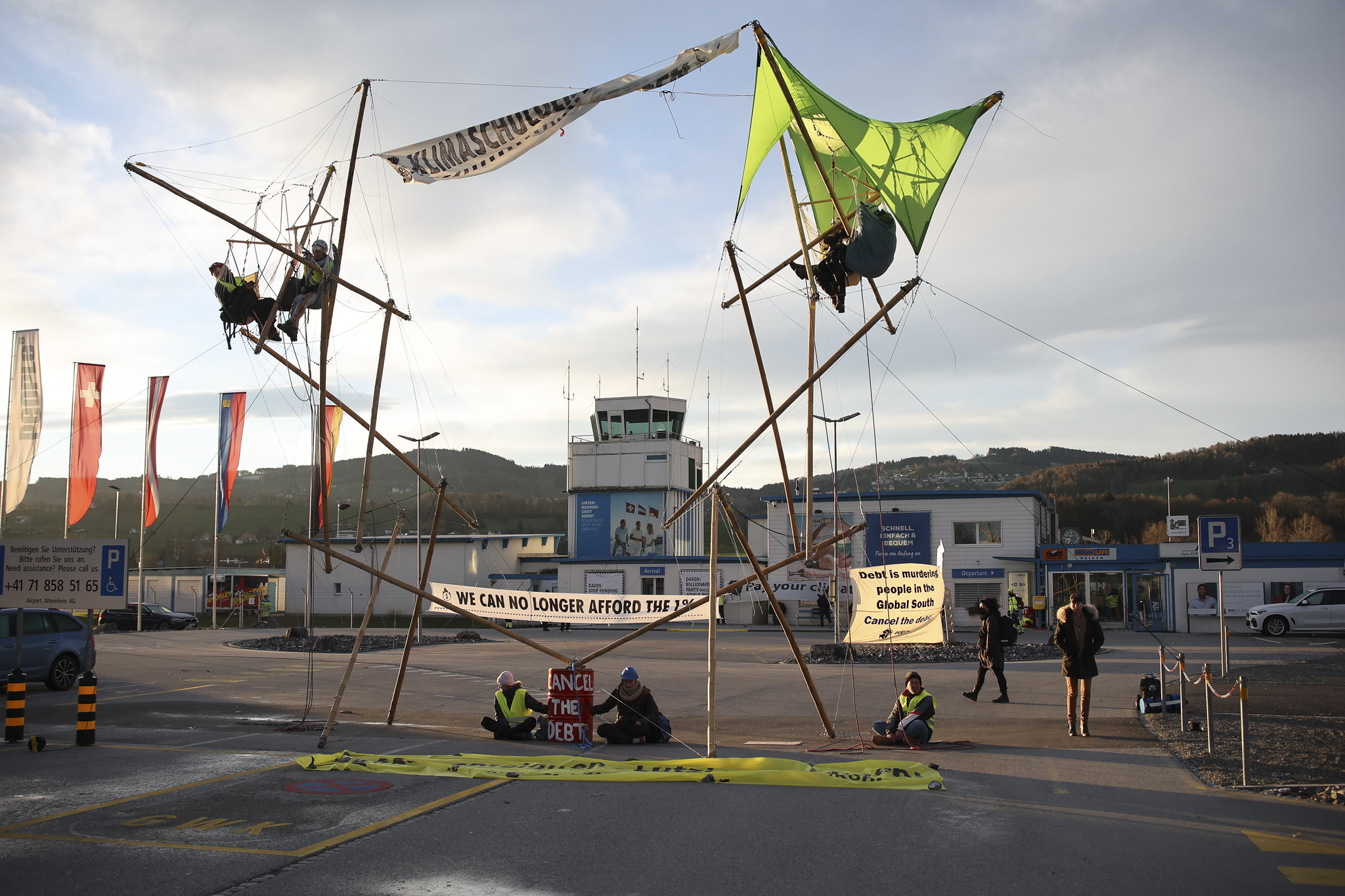 The access to the private jet airport in Altenrhein Switzerland was blocked by Debt for Climate activists, preventing the transfer of attendees arriving in Davos for the World Economic Forum. Their demands: cancellation of all foreign debt of countries in the Global South and that those who pollute the most should pay for the loss and damage they have caused.

It was the first hours of Monday 16th of January, and World Economic Forum (WEF) attendees were arriving at the private jet airport in Altenrhein Switzerland to travel from there to Davos for the WEF. But guests were greeted with a surprise: 15 Debt for Climate Switzerland activists had just blocked the airport with massive structures interrupting their transfer to Davos. The blockade lasted for 4 hours, with signs posted everywhere with messages like “we can no longer afford the 1%” and “Davos: stop funding climate chaos”.

Their aim was to hold the richest 1% accountable for the climate breakdown and ecological destruction caused by extreme emissions, lax policies and climate-damaging investments, along with highlighting struggles of working people and those most affected by the climate crisis around the world, who are  not represented in Davos.

This act happened as part the international Make Them Pay campaign – the same campaign that this past November blocked 11 international private airports, demanding a ban on private jets. Debt for Climate activists are demanding the rich pay their climate debt through:

To accelerate the global energy transition, Debt for Climate calls for the unconditional cancellation of all Global South foreign debt. This demand constitutes a first step towards structural reparations to the countries most affected by the climate crisis and who have contributed the least to it. Debt is the primary form of neo-colonialism today, forcing poor countries to keep expanding their fossil fuel industry, further fuelling the climate collapse. These debts are often illegitimate and taken out against the interests of local populations. 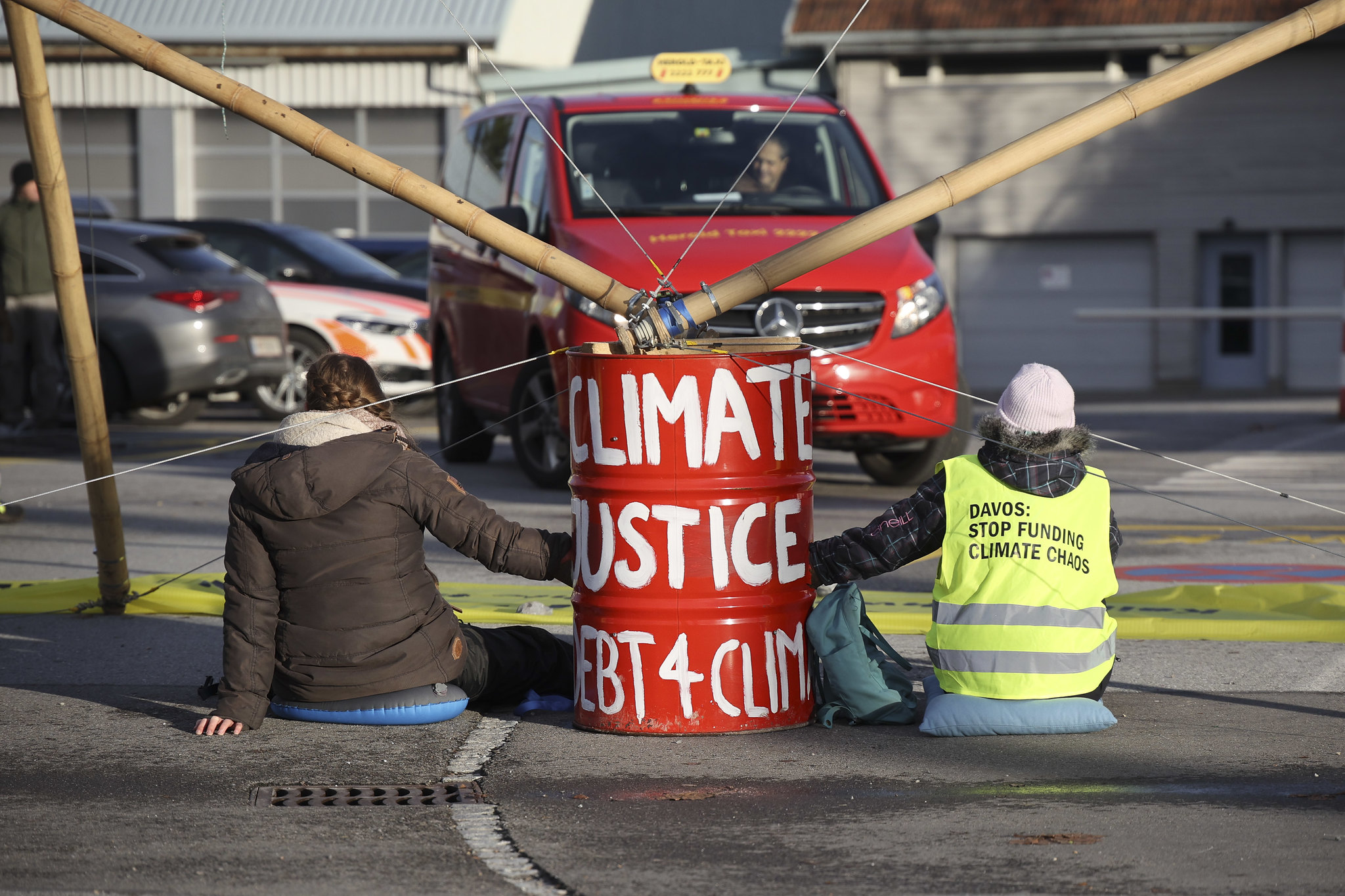 “Our world shouldn’t be fragmented between North and South; the real divide is between the 1% who profit from this exploitative economic system, and the rest of us who suffer its consequences. Above all, extreme accumulation and resulting inequality are driving our planet to climate breakdown” – Esteban Servat, activist from Argentina.

The richest 1% of the global population are responsible for more than twice the overall emissions of the poorest half of humanity. Through summits like the WEF, they have been protecting their profits, by blocking meaningful responses to climate breakdown and by continuing to fuel exploitation and ecological crises. It is only fair that the wealthiest in society, who are the most responsible for the climate crisis, pay for the necessary transition. The wealthiest should also be responsible for paying for losses and damages, as well as funding mitigation and adaptation measures, for the populations most affected by the harshest impacts of the current climate breakdown. 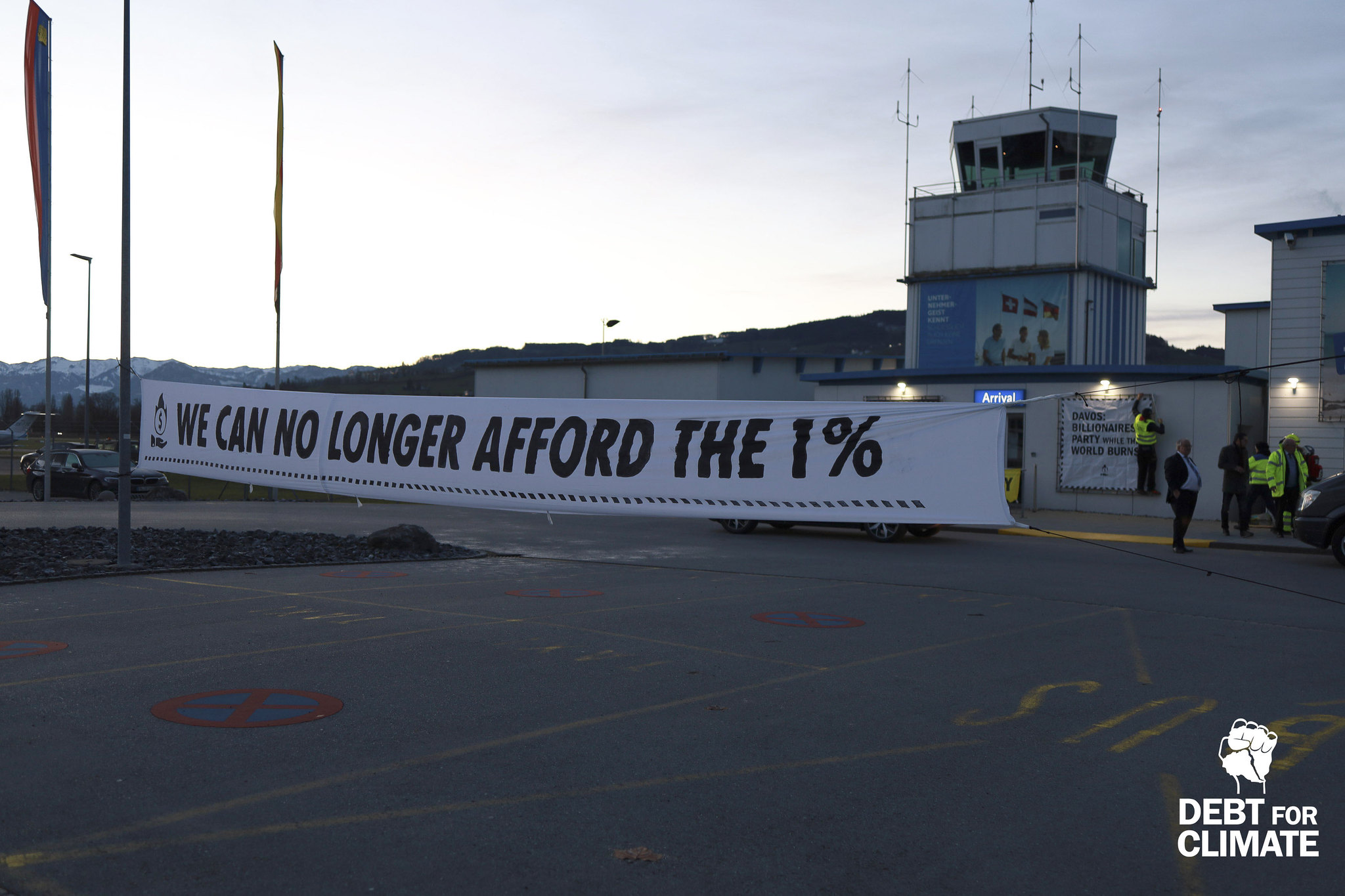 “We must end the triple injustice: combating environmental breakdown cannot be paid for by those who have done least to contribute to it, who have the least resources to pay for it, and whose populations would suffer the most from diverting finances towards it. For this reason, the complete and unconditional cancellation of the debts of the economically impoverished countries of the Global South is unavoidable. These debts have been incurred mainly through the vandalism of the environment and the exploitation of people. Added to this is the promotion of corruption and despots in these countries by such creditors as Switzerland, which is known worldwide as a secret bunker for stolen state money, especially from Africa.” – Peter Emorinken-Donatus, activist from Nigeria.

Every year, thousands of guests representing the wealthiest sectors of society fly to Davos for the WEF, where they debate topics ranging from climate and nature to fairer economies and global cooperation. This year they proposed to “gain fresh perspectives, and build problem-solving communities and initiatives” towards an era of “global responsibility and cooperation”.

But the hypocrisy of such statements and agendas is flagrant, starting with travelling there by private jet. A new report by Greenpeace International revealed WEF participants travelling to Davos last year were responsible for doubling the number of private jet flights during the week of the event, causing emissions from private jets four times higher than an average week. There were 1,040 private jet flights in the airports serving Davos in the week of the WEF with 53% of them being short-haul flights (under 750 km), and the shortest flight recorded was only 21 km – all these flights could have easily been replaced with train journeys. Meanwhile, 80% of the world’s population has never even flown but they are battling more frequent and dangerous incidences of extreme heat, flooding and drought. 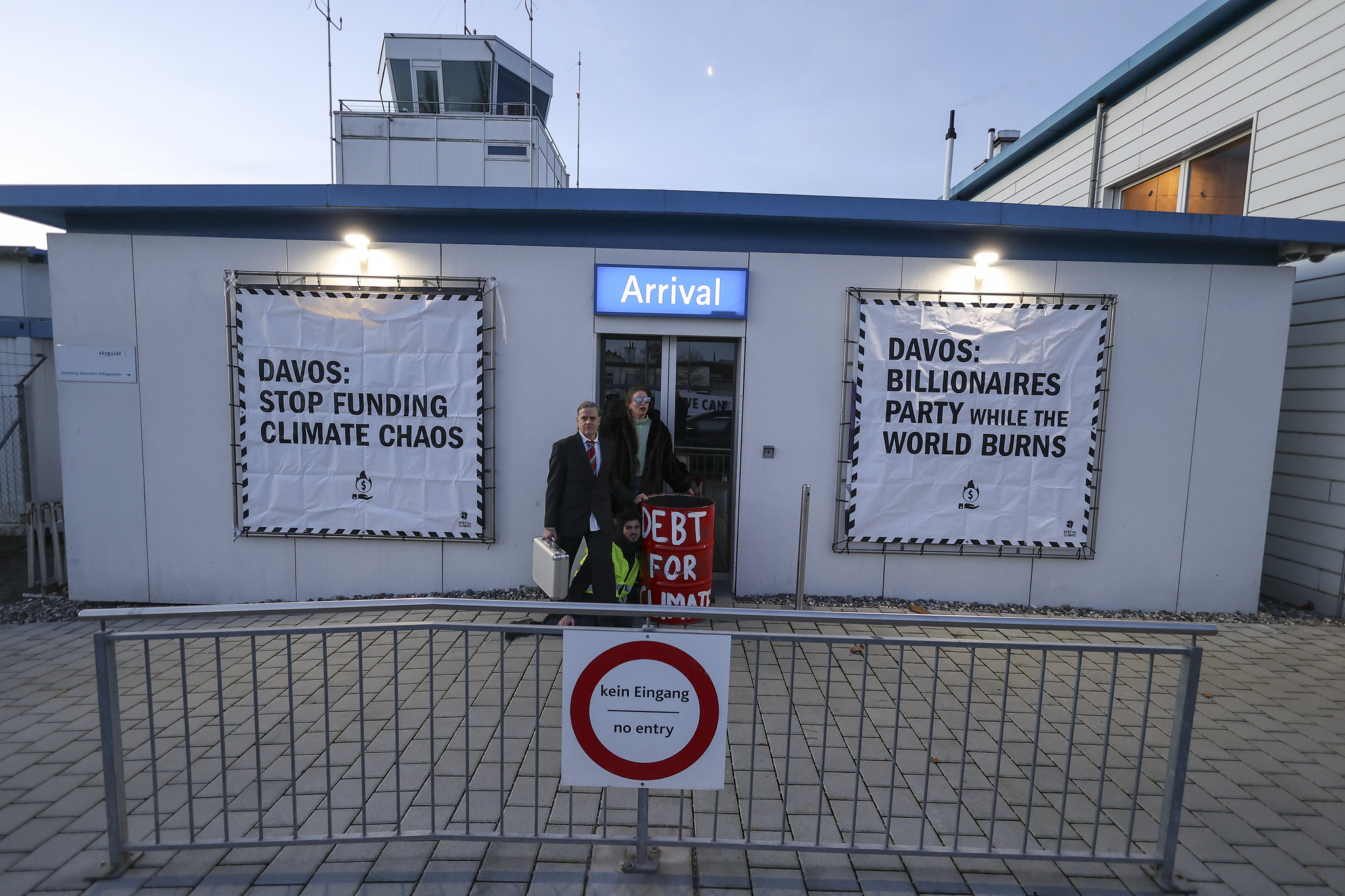 This action was designed to draw attention to this farce: it is the elites represented in the WEF, including development banks, northern States and corporations, who are responsible for debt in the Global South and the intensifying climate breakdown and environmental devastation experienced disproportionately by populations living there. The solutions for the climate crisis have existed for decades, but just don’t expect to hear about them from Davos where the hypocrisy and failure of the world economic elites continues to be on full display.