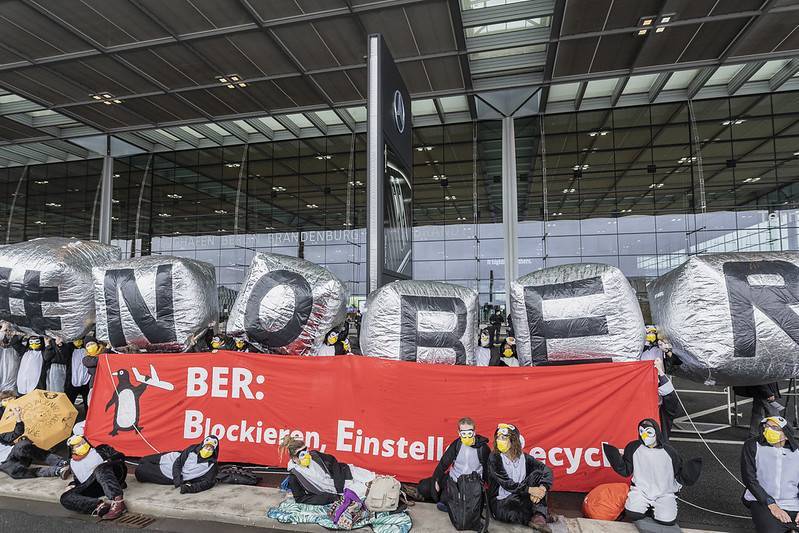 Berlin, 31.10.2020 – The climate justice group ‘Am Boden bleiben’, a member of the international Stay Grounded network, today blocks the opening of the new airport in Berlin with protest actions. The opening of the BER had been delayed for nine years, after a series of expensive construction and corruption issues. Am Boden bleiben carries out an action of civil disobedience and says that there is no room for new airports in times of climate crisis. You can follow the action live on the Twitter accounts of Am Boden bleiben and Stay Grounded.

“The long construction time of the BER and the immense costs of over six billion are embarrassing – but the real scandal is that the airport is being opened despite the climate crisis! If we want to comply with the 1.5°C limit, air traffic must not continue to grow – it must decline! We will block this madness with civil disobedience,” says spokesperson Lena Tucnak. Hundreds of activists dressed as penguins are expected: “Because penguins don’t fly and are the coolest birds that stay on the ground.”

The initiative calls for a drastic reduction of aviation, a ban on domestic flights, an end to subsidies for the airline industry and the expansion of climate-friendly alternatives. Parallel to the blockade action, a variety of protests are planned, including a demonstration by Fridays for Future, Extinction Rebellion, residents affected by plane noise and others.

The action is not about blocking individual passengers, but about criticising the unfair advantage given to the airline industry. In addition to the billions spent on the construction of the BER and the recent rescue of Lufthansa, the airline industry is also indirectly subsidised to the tune of €13 billion per year through the lack of a kerosene tax and VAT on tickets.

“As the climate crisis unfolds, billions of taxpayers’ money are being put into the most climate-damaging form of travel. We have to start the mobility turnaround now, which means trains instead of flights and good jobs in sustainable areas”, says Melek Berger, also spokesperson of the initiative.

To ensure the protection of all parties involved in the face of the COVID-19 pandemic, ‘Am Boden bleiben’ has developed a hygiene concept. This includes, among other things, distance rules, face masks and a secure traceability system.

‘Am Boden bleiben’ is a member of the international network Stay Grounded for a rapid reduction of aviation and a just transition of our mobility system, consisting of more than 160 member organisations.