Stay Grounded will start the “Let’s Stay Grounded!” campaign this year. In this campaign, we’re calling to get active against aviation and for climate justice. In an age of Climate Emergency, our campaign will challenge growth of aviation, which is a result of economic and political structures and cultural ideas/lifestyles that are predominant in many social groups in Europe. Together with different initiatives around Europe, we will build a strong and connected movement to stay grounded. The campaign aims to reduce the social license of both the aviation industry and hypermobile individuals, and will introduce the notion that staying grounded or travelling slow is desirable and cool. 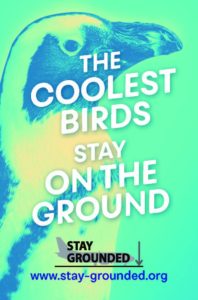 The campaign will link several approaches against aviation, showing they belong together: By pledging to fly less, engaging in direct action against aviation and working towards change in institutional travel policies, concerned citizens’ awareness of aviation’s climate impact will galvanise political support for systemic change that ultimately will reduce aviation emissions. This campaign empowers people to take matters into their own hands and fight for systemic change.

In this campaign we want to follow a strategy that connects the individual with the systemic level. Systemic and behaviour changes are two sides of one coin; both of them are needed in order to realize the needed  transformation (see more on our assumptions in our Strategy Paper that we can send you if you’re interested). The aviation system will only change if many of its elements are de-stabilised by organised citizens, movements and allied institutions until a critical point is reached where a new “system” that enables sustainable transportation for all emerges. Pledge campaigns focussing on behaviour change can only address certain elements (e.g. norms) of the aviation system. One aim of the campaign is therefore  to “politicize” individuals who pledge not to fly and empower them to become active ambassadors for systemic change. We also want to challenge the idea that a top-down system change will take place without an active civil society demanding and partially already living it.

Even though Stay Grounded is an international network, this is a European campaign – this is a strategic decision, based on our capacities and the conviction that Global North countries need to be the first to rapidly reduce aviation.  Of course, we will apart from this campaign continue our international work.

We plan the following activities:

>> How to cooperate with us in this campaign