Open Letter: Solidarity with Save Maldives

On Febuary 26, the Stay Grounded Network sent out an open letter to the President of the Maldives on behalf of its more than 100 global member organisations in solidarity with the Save Maldives citizen movement and their campaign #SaveKulhudhuffushi. It urges the recently elected President Ibrahim Mohamed Solih to stop the ongoing and planned destruction of ecosystems and livelihoods for airport infrastructure.

The letter also highlights the tragedy that these new airports will accelerate climate breakdown through the airplane emissions they generate – while the construction itself in some cases destroys mangrove ecosystems which are particularly good at sequestering and storing carbon and play a vital role in coastal protection – making the island more vulnerable to climate change impacts. 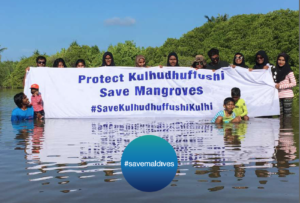 Stay Grounded urges the President to stop construction and planning of further airport infrastructure. Strengthening the national transport network is important, but future transport systems must be eco-friendly, sustainable and reliable as advocate for climate action – building more airports on the contrary, accelerates climate breakdown.

Letter sent to the President of the Maldives

On behalf of the Stay Grounded Network, I send our congratulations on your recent election as the president of the Maldives! Also, we would like to congratulate on your decision to adopt the “Jazeeraa Raaje” manifesto. We welcome the decision to make sustainability of the Maldivian archipelago the basis of the manifesto, which is implied by the name of the campaign itself.

I am the Co-founder of the Stay Grounded Network and its Coordinator. Stay Grounded represents more than a 100 member organizations on all continents, working together to bring forward a just, environmentally sound transport system and to rapidly reduce air travel. Even more organizations, including large networks such as Friends of the Earth International, support our positions. Since 2017, we have been supporting the Save Maldives citizen movement and their campaign #SaveKulhudhuffushi.

Already, there are 12 operating airports (including 3 international airports) serving the Maldives. It is therefore with great regret that Stay Grounded takes note that your administration has vouched to continue the numerous questionable airport infrastructure projects started by the past administration such as Kulhudhuffushi and FaresMaathoda airport and is even planning new airports itself. Environmental and socio-economic damage through such projects, including deforestation and loss of rural livelihoods destruction of coastal ecosystems due to land reclamation are already evident, as documented in the Irreversible Damage, Destruction and Loss in the Maldives report by Save Maldives.

Two months into your Presidency, it appears that the planning and construction of airports and destruction of mangrove ecosystems is continuing. We learned with increasing concern that according to the annual state budget of 2019, there are 7 ongoing airport development projects (including 1 international airport): Kulhudhuffushi, Maafaru, Madivaru, FaresMaathoda, Fonadhoo, Maavarulu and Maafinolhu Airport. Another 4 domestic airports are being proposed, planned or budgeted: Makunudhoo, Nilandhoo, Fainu and Muli Airport.

It is tragic that these new airports will accelerate climate breakdown through the airplane emissions they generate – while the construction itself destroys eco-systems, in some cases mangroves which are particularly good at sequestering and storing carbon and play a vital role in costal protection – making the island more vulnerable to climate change impacts. Let us highlight some of the airport projects continued by your administration:

Close to Faresmaathodaa island, five islands are threatened to be destroyed for the construction of FaresMaathoda Airport. The project is continued ignoring the fact that the 394-page EIA warns of a “strong likelihood of flooding on the airport due to the elevation” which could make the new airport unusable.

Another worrisome example is the planned new airport on Fainu linked to a hotel project, which combined could swallow up two-thirds of the island land area, with the airport runway extending along the entire southern coastline. The Maldives Independent calculated that 31 hectares of vegetation would be lost, encompassing a dense jungle area and agricultural land.

We share the concerns of ECOCARE Maldives that the Fainu Airport project might repeat the problems with construction of other airports, with failures to minimize damage, EIA recommendations not being followed and mitigation measures not being implemented. The EIA for Fainu Airport prepared was rejected by the EPA on 14th November 2018, as being “poor quality”, incomplete and failing to meet requirements. Stakeholders whose livelihoods would be affected were not consulted and the chapter on impacts and mitigations was inadequate. To our knowledge, no further EIA has been submitted, we urge you to stop the airport project together with the other planned airport projects at this stage.

Stay Grounded is deeply concerned that your administration also undertakes the planning of new airports itself: during the presidential campaign, you pledged for example to conduct a feasibility study for a new airport on Makunudhoo Island in H.DH Atoll. This new airport would be the third airport on this atoll, while just 47km away H.Dh.Kulhudhuffushi is being developed. Strengthening the national transport network is important, but future transport systems must be eco-friendly, sustainable and reliable as advocate for climate action – building more airports on the contrary, accelerates climate breakdown.

To conclude, we would like to congratulate your administration on starting work on conservation of mangrove ecosystems in H.Dh. Neykurendhoo, H.Alif Baarah and H.Dh. Keylakunu and declaring them protected. We will keep following events closely and we urge you to prioritize the safety and livelihoods of your people over the development of infrastructure and property for the tourism industry in the Maldives. Please contact me if you would like to discuss these points further.