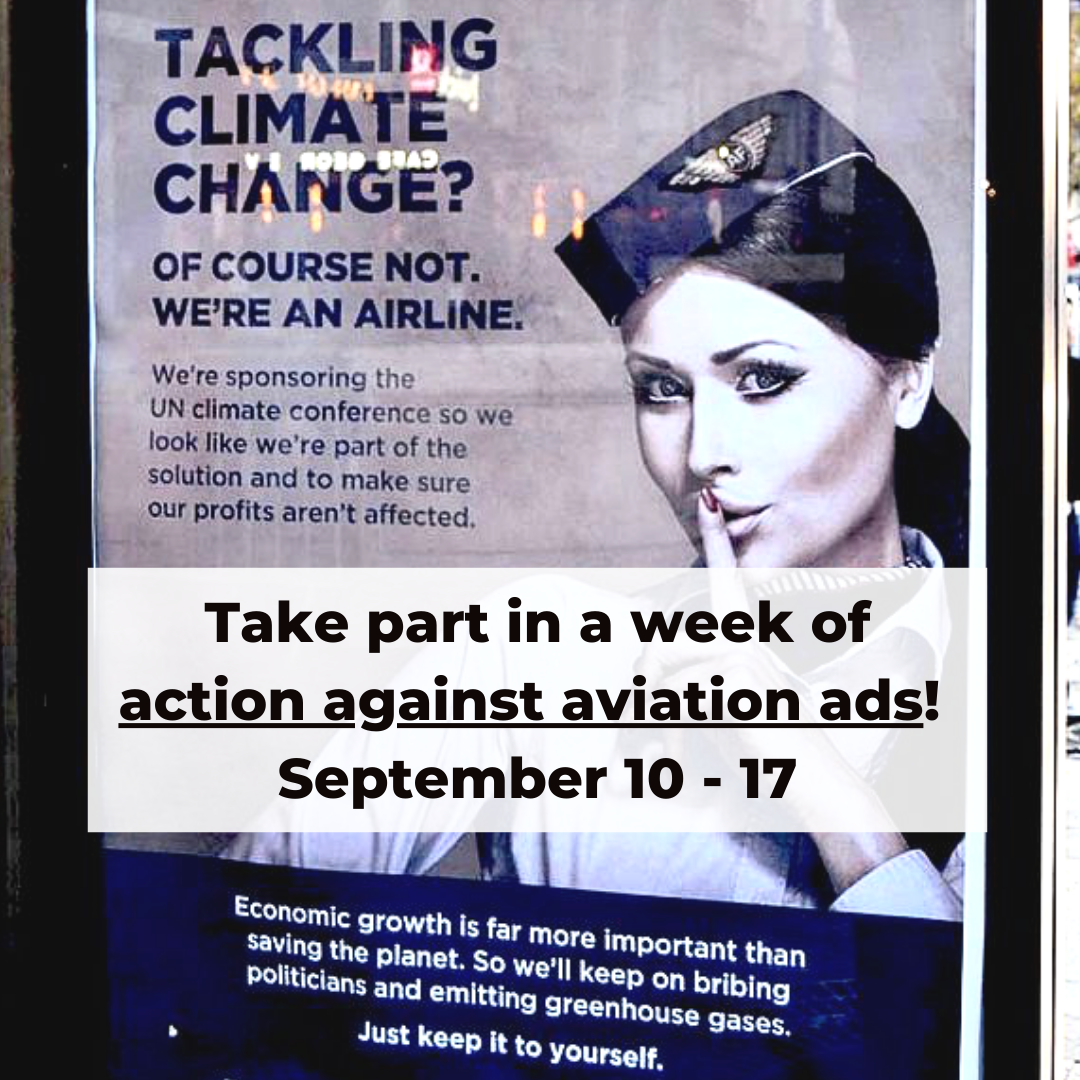 Grassroots groups around Europe* will be taking action September 10 – 17 to oppose fossil fuel advertising in support of the European Citizens Initiative to #BanFossilAds. Brandalism and friends in The Subvertisers International are calling to take action specifically against advertising for airlines and airports. Stay Grounded supports this call, if you need of financial support to take action (e.g. printing subverts), you could consider applying for our action pot.

Aviation is one of the most climate-harming sectors with no sign of real commitments to reduce emissions or to a just transition for workers. As Europe burns under unprecedented heatwaves, advertising is pushing more flights and false solutions to drive up ticket sales and aviation industry profits.

Citizens, activists and artists around Europe will be taking action to call for a ban on advertising for fossil fuels, including ads for profiteering energy giants, airlines and massive status-symbol cars.

This is a broad call to action against advertising from big carbon polluters in which aviation is a key target – get involved doing whatever excites you or feels effective against ads for airports/airlines. The call to action is timed to support the drive to gather signatures for the ECI petition to ban fossil fuel advertising.

Actions can include: altering, replacing or removing corporate ads, hosting a community workshop, or organising a demonstration at an airport or advertising agency – whether your tactics are open or clandestine – get in on the action. A Toolkit for action can be found HERE with artwork available from early September. For details about each action see below.

For those in need of financial support to take action (e.g. printing subverts), you could consider applying for the Stay Grounded action pot.

• Highlight the contradiction of advertising for air travel (and driving demand) during a climate crisis.
• Highlight greenwashing by airlines, airports and their ad agencies.
• Name and spotlight the advertising agencies working for major airlines and airports.
• Support local, national and international calls to #BanFossilAds, the European Citizens Initiative call for a ban on fossil advertising & sponsorship #BanFossilAds.
• Support calls for a Just Transition for aviation industry workers. 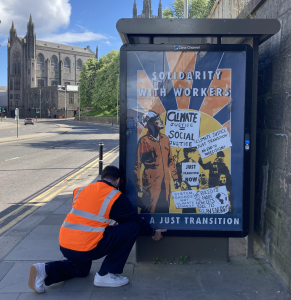 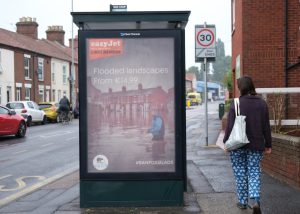 *Artworks coming soon. Read the installation and photography guide for this project*

‘Subvertising’ (subverting advertising) is an empowering way to speak back to the one-way dominance of corporate advertising. By amending or adjusting or replacing adverts, we can parody a company’s brand, spotlight corporate malpractice and make space for marginalised voices. Subvertising can involve altering ads or replacing commercial ads with other artwork, or even simply using paint and paint-rollers to cover up or ‘decommission’ an entire billboard, whether digital or ‘paper and paste’. There are some legal considerations.

Artwork files designed for this project will be available soon to print as large-format posters. [Link to be added]

To get started, check out Brandalism’s Subvertising Manual, read the installation and photography guide and take a look at some previous subvertising campaigns: 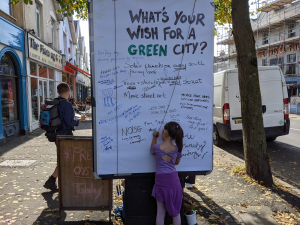 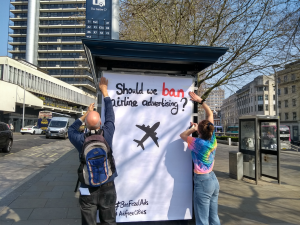 The ‘Six Sheet Cover Up’ involves repurposing a standalone street advertising board, usually a 6-sheet size. It’s a simple, family-friendly and low risk way of engaging people on the street about advertising. Here’s a how-to video from Adfree Cities in the UK.

How to organise an advertising ‘cover up’:
• Cover a smaller street advertising unit with blank paper.
• Write a question at the top and leave some colourful pens for people to write with.
• As people write, you can chat to them about the campaign and why we’re taking action against aviation advertising. You can also leave and come back (it’s a good idea to get some photos before you leave!). 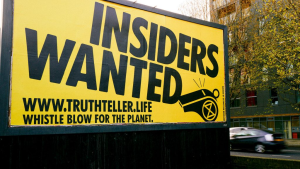 Leak information on aviation and high carbon advertising
If you currently work for an advertising agency with airline, airport or other fossil fuel clients and wish to anonymously share information about their work (particularly if there is evidence of greenwashing or intent to spin climate-damaging practices), here are two options:
a) The anonymous whistleblowing Truth Teller platform offers the chance to tell your story, full description of anonymity processes are on the website.
b) Clean Creatives have partnered with AdLeaker to shed light on how the fossil fuel industry uses PR and ad professionals to advance their polluting agenda. Send a Signal message to the number +1-929-305-1583. All sources will be fully anonymous.

Many forms of direct action (further to tactics #1 and #2) could be employed to meet this project’s aims. Here are just a few suggestions:
• Stage a protest inside or outside advertising agencies that work with airline clients.
• Organise an anti-greenwash demo at an airport with greenwashing practices.
• Join a demonstration such as a climate march and aim to draw attention specifically to the issue of advertising and advertising agencies. Use artworks, placards or banners to get good engagement and photos.
• Get creative! See below for the ‘Dirty Scrubbers’ who protest against greenwashing.
Make sure to share your photos widely on social media. 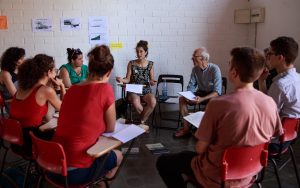 Gather people together for a speaker evening or workshop to raise awareness of the role of aviation advertising in fuelling the climate crisis, the issue of greenwashing in air travel, the European Citizens Initiative to #BanFossilAds and how to take action in your country.

You could invite someone to give a talk – think about local academics, activists and artists or subvertisers who could come and speak.

Tactic #6: Ask your council to ban advertising for aviation and high carbon products 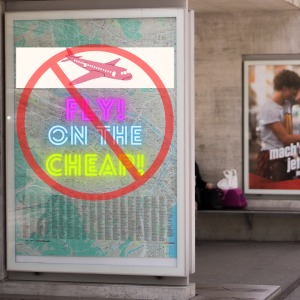 Could you engage with local or national decision-makers? You could try a letter writing campaign to coordinate as many people as possible to write to a local politician or Mayor, asking for a ban on aviation advertising. Or an open letter to a political or regulatory body with allied groups, campaigners, activists or even celebrities as signatories.

The Badvertising campaign’s Low Carbon Advertising policy toolkit (while designed for UK local authorities) is a useful resource explaining the rationale for banning high carbon advertising, and how to shape policy.

How to report your action

When sharing your photos on social media, please use the hashtag #BanFossilAds. Make sure to direct EU citizens to sign the European Citizens Initiative: www.banfossilfuelads.org

For those taking part with subvertising, see Brandalism’s installation and photography guide for this action, for advice and instructions on reporting your action for maximum effect.

Email brandalism@riseup.net if you’d like advice on taking part or reporting your action (caveat – replies may be intermittent).

*While UK citizens cannot sign the ECI, UK groups and individuals can act in solidarity and to raise the visibility of the petition for EU citizens.