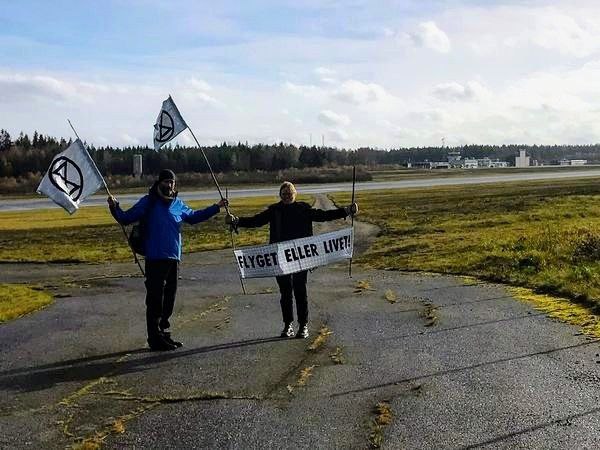 After walking onto the runway at Växjö Småland Airport in Sweden last October, Ella and Björn, two parents with young children are now sentenced to two months in prison. The disctrict court in Växjö found the activists guilty of entering the airport illegally. It is the first time climate activists from Extinction Rebellion Sweden have been sentenced to prison for peaceful civil disobedience.

I am an ordinary parent of young children who has never been in contact with the legal system before. It is very scary to be sentenced to prison and having to leave my children at home, it is quite extreme. But continuing as usual, as if the climate crisis is not a fact, feels even more extreme, so what choice do you have, wonders Ella Tillema.

Björn Paxling agrees that it feels hard to be taken away from his children and locked up in prison.

At the same time, it feels even worse to be a part of the adult generation that is brazenly destroying the conditions for life on our planet. It is our duty as adults to do everything we can to hand over the planet in as good a condition as possible to the next generation, and today that requires peaceful civil resistance to be able to get there, says Björn.

On October 31 2021, climate activists Björn Paxling and Ella Tillema climbed over a fence and entered the airport in Växjö, where they glued themselves to a runway, to protest against the state subsidies of aviation and the political inaction in the face of the climate disaster. They immediately contacted both the police and air traffic control.

We did not go to the runway until we had confirmation that all air traffic was paused and it was certain that no ambulance flights needed to land or take off.

It also turned out that no flights were stopped in Växjö because what would have landed was delayed due to a simultaneous climate flight action at Bromma airport.

Since both Björn Paxling and Ella Tillema said in the interrogation that they could see themselves carrying out similar actions again, the court believes that “there is a great risk of recidivism and that a suspended sentence is therefore excluded. Then there is no other alternative but a prison sentence.”

Ella Tillema’s lawyer Pia Björstrand believes that the sentence is remarkable compared to other crimes.

A man who has abused his wife has the opportunity to receive a suspended sentence after the first time the crime is committed, but peaceful activists who fight for the future of all of us are put in prison even though they have never committed a crime before, says Pia Björstrand.

She believes that the court’s assessment is contrary to international law and UN reports. Peaceful civil disobedience must be judged leniently, even if in some cases it is disruptive to society. Both the UN and the European Court of Justice have stated that protesters who want to draw attention to the climate crisis should never have to suffer a prison sentence for engaging in peaceful civil disobedience.

Björn Paxling and Ella Tillema believe that they acted in an emergency, but according to the verdict, “the protection of public interests such as the environment, climate and nature conservation must be handled by political bodies and relevant authorities.”

In the judgment against us, the court states that we as citizens must accept the risk assessments that politicians and authorities have arrived at. I refuse! It is completely unacceptable to subsidize aviation at a time when our emissions urgently need to be drastically reduced and civilization as we know it is under threat. Climate research cannot be ignored in favor of opinion polls – our elected officials must take responsibility and not push these problems onto future generations.

The verdict will now be appealed.

The civil disobedience action at Växjö airport was part of the largest national aviation action ever, where actions were carried out at a total of eight airports in Sweden. Emelie Ribeiro and Tina Kronberg, who stood up on a plane at Landvetter and refused to sit down, have been sentenced to pay fines, while Helen Wahlgren, who went out onto the airfield in Sturup and stood in front of a plane, received a suspended sentence. Other judgments have not yet been handed down.

Extinction Rebellion is an international movement demanding that the climate threat and the mass extinction of life on Earth be treated as a crisis, and that our politicians act immediately and forcefully. The movement uses peaceful civil disobedience. The rebellion was started in Great Britain in 2018 and today exists in several parts of Sweden.

Note: This text was written and first published as a press release by Extinction Rebellion Sweden.