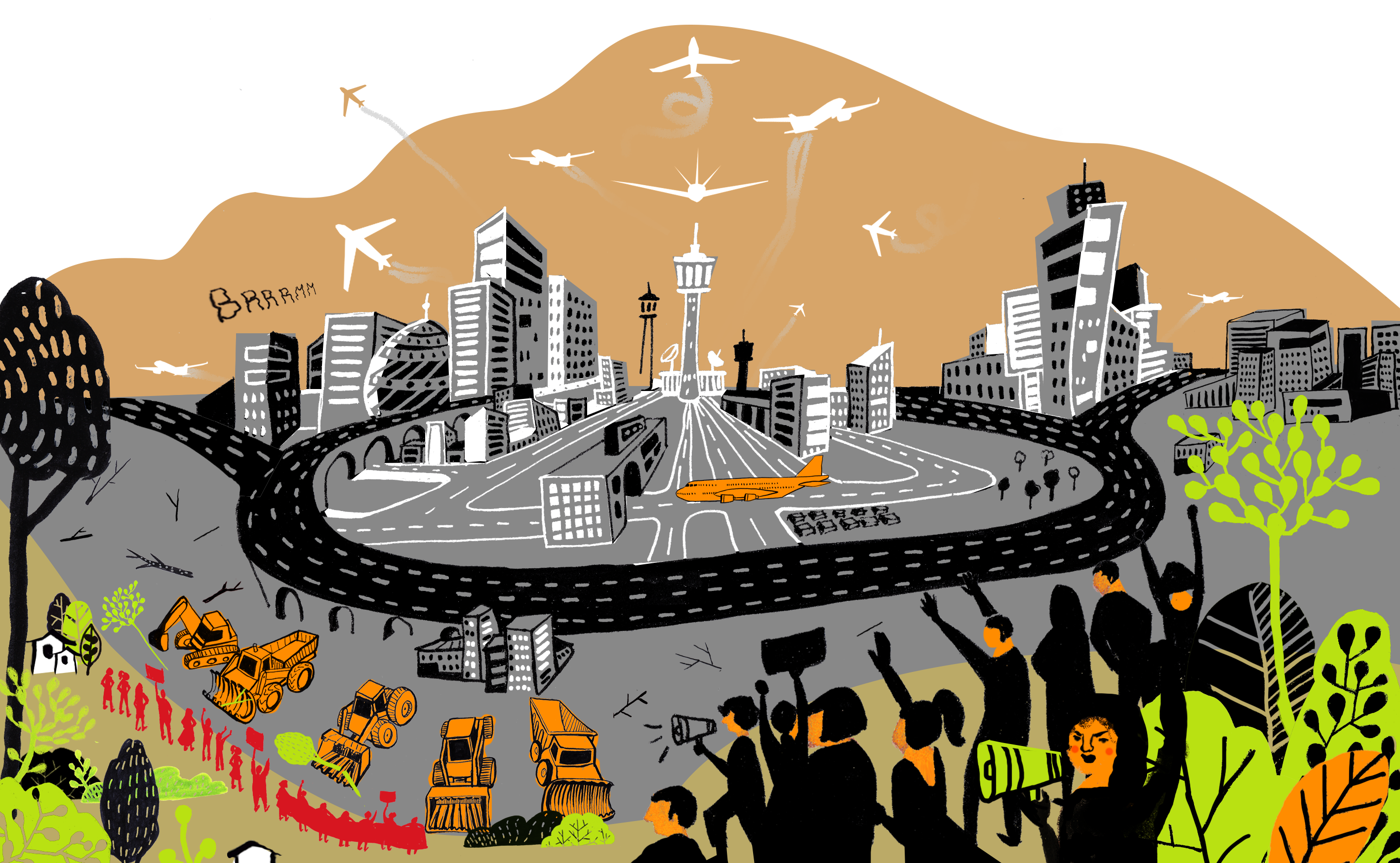 The issue of climate change

Climate change is the biggest challenge of our time. It will have diverse and unforeseen impacts, which include the destruction of entire ecosystems, and threatens the future of many living beings on the planet – human and non-human [1]. The root causes of climate change are known: an economy based on fossil fuels and on the never-ending extraction of natural resources, and a way of living, especially in the Global North, that doesn’t respect planetary boundaries. Yet, as our experience with decades of international ecology and climate summits has shown, the necessary changes in our system are not to be expected from our leaders or from a majority of society. The dominant climate mitigation strategies and environmental programs work too slowly, don’t address the roots of the problems or even promote dangerous false solutions. Profit interests, competition, and comfort still prevent the most-needed deeper changes from being implemented. We cannot keep waiting, we need to act as civil society.

Aviation is the most climate harming mode of transport. Aircraft emit various other substances in addition to CO2, leading to an overall climate impact of aviation that is at least double the effect of the emitted CO2 alone [2]. While two decades ago flying was still something special, today in the Global North it has become normal to fly somewhere for just a weekend. Work relations are often built upon the existence of cheap flights and ever more trade of goods is being done by airplane. Aviation produces already a significant part of the world’s total greenhouse gas emissions, despite less than 10 per cent of the world’s population flying [3]. This privileged mode of transport is at the expense of others: residents exposed to noise and particle pollution, local ecosystems, future generations and those in the Global South who are already bearing the brunt of the impacts of the climate crisis. This is a crisis which will only become worse, as the emissions from aviation are expected to quadruple until 2050 [4] .

The root causes of the problem

The root causes of aviation growth don’t lie in “bad” individual behaviour, but rather in the general growth imperative of our economic system, artificially low prices that don’t reflect the real cost of flying, the power of the aviation industry and its support from governments in the form of massive subsidies. For example, unlike car fuel or heating oil, kerosene is still not taxed. Simultaneously, in many regions, politics assault alternative sustainable modes of transport, e.g. European cross-border and night trains. Cheap prices and the lack of alternatives often lead people to take a flight even though they prefer the train.

The power of the industry

The aviation industry has a disproportionate influence on politics. International Aviation has, until now, wriggled its way out of the Paris Agreement. Instead the ICAO (International Civil Aviation Organisation) now decides upon aviation’s international climate targets. Inside the ICAO the industry is represented by the Industry High Level Group (IHLG), bringing together the heads of four industry organizations: ACI, CANSO, IATA and ICCAIA. Further, the Group on International Aviation Climate Change (GIACC) was established after COP 15 (UN Climate Conference in Copenhagen, December 2009) within ICAO. With this move ICAO had effectively taken responsibility for climate change issues away from its environment committee, to a group of experts meeting behind closed doors [5]. The power of the industry lobby is as well visible at the national and regional levels. Also, aircraft manufacturers have much power, with Airbus and Boeing controlling almost the whole industry. They are closely linked to the oil and war industrial complex. Military equipment sales account for 20% of the turnover of Airbus and a full 50% of Boeing’s turnover [6].

People are confronted more and more with a greenwashed image of aviation. The industry upholds promises of aviation’s “carbon neutral growth”, fomenting the belief in future technical solutions which remain mere illusions. The industry also wants to replace more and more fossil kerosene with dangerous biofuels, leading to monoculture plantations and the destruction of biodiversity. Additionally, the industry claims that it is not necessary to reduce its own emissions, but that it is sufficient to offset them: From 2020 onwards, the aviation sector could become the largest buyer of carbon offset credits via the new climate strategy, CORSIA (Carbon Offsetting and Reduction Scheme of International Aviation). These false solutions mislead the public from real solutions and instead lead to further problems, notably land grabbing. For example, to offset the emissions of flying, carbon offset credits will be created through projects in the Global South like hydroelectric dams, which often risk displacing local people, destroying ecosystems and ultimately jeopardizing a community’s existence. We are at a point in history, where those greenwashing strategies are new and rising quickly, with the consequence that they distract from real solutions and the systemic changes we need [7].

The rapid growth rates of aviation demand new infrastructure. Simultaneously, new or bigger airports demand growth in flights. 550 new airports or runways are planned or being built around the world, plus runway expansions, new terminals etc, involving land grabbing, the destruction of ecosystems and local pollution (noise/traffic/particles/etc.) [8]. Resistance against airport projects can prevent those negative effects, and counter a lock-in to an emissions-intensive, destructive form of mobility for decades into the future. It also makes abstract issues such as emissions become tangible. By connecting different local struggles, sharing experiences and joining forces, we can build up pressure to tackle the root causes of aviation growth and climate change.

[2] Depending on different estimations, science tells us that the effect of aircraft on climate is 2 to 4 times larger than the forcing by aircraft CO2 alone. This has to do with a 20-50% increase in the NOx abundance caused by aircraft traffic in the vicinity of their cruising altitude (10-12 km). This has produced a 4-8% increase in the ozone concentration of the upper troposphere (maximum value during summertime) where ozone is a strong greenhouse gas. Climate pertubations could also result from the formation of persistent contrails and high-level cirrus clouds produced in the busiest flight corridors. Additional effects on the radiative balance of the atmosphere could have been generated by the soot and sulphur particles released by aircraft engines. The warming effect of the changes in cloudiness is more difficult to assess but appears to be also of the same magnitude as the warming effect of CO2 emitted by aircraft.
See Kärcher (2018): https://www.nature.com/articles/s41467-018-04068-0
CE Delft (2017): https://www.cedelft.eu/publicatie/towards_addressing_aviations_non-co2_climate_impacts/1961
Commision of the European Communities (1999): https://eur-lex.europa.eu/LexUriServ/LexUriServ.do?uri=COM:1999:0640:FIN:EN:PDF ;
See also graphic and sources on page 4 of study “The Illusion of Green Flying“