Barcelona: A City Exploited by Tourism and Air Traffic

Barcelona is the fourth most-visited European city, the first destination of Mediterranean cruise ships and the seventh largest European airport. While there were 3,7 million bookings in 1990, in 2016, Barcelona had more than 31 million bookings. Barcelona’s tourism industry leads to very serious impacts and conflicts for the local society and the environment – social movements raise critique.

The city of Barcelona has experienced major transformations over the last four decades. The questionable developmental and speculative process around the celebration of the 1992 Olympic Games produced the first series of touristic waves which continue producing themselves today. If anything has changed, it is the overall perception; the social criticism and struggle against processes 1 which have brought about the growth of mass-tourism in Barcelona and carried with them a spiral of inequalities and social conflicts. This is not a new or a Barcelona-specific phenomenon, it simply follows global logics and impacts many southern European 2 cities and their inhabitants in a similar way.

The Olympic Games might have awoken discussion, but it was mostly in 2004 that the celebration of the “Fòrum de les Cultures” provoked criticism and mobilized social movements against another mega-event related to developmental and speculative dynamics. The global criticism against the process of touristification has been visible for years and it is brought forward by the analysis, denouncement and local proposals of social movements. Each year has been characterized by the growth of different mobilizations against the different aspects of touristification. 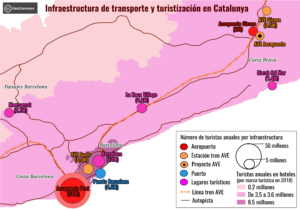 Transport and Tourist Infrastructure in Catalonia

The promotion of the Barcelona brand is, broadly speaking, the result of international impulses which offered the Olympics, other global events and touristic icons. This promotion has been managed by the public-private consortium Turisme Barcelona and has made Barcelona a touristified city with the largest touristic affluence on the planet. This can be proven by Barcelona’s rampant evolution: it grew from 3,7 million bookings in 1990 to more than 31 million bookings in 2016 3. As a matter of fact, more than 23 million visitors and tourists pass through Barcelona each year, with a mean of 154.000 daily visitors 4. Being one of Europe’s most dense cities (15,881 inh/km2), with 1,6 million residents, the pressure of tourism is very present, especially in the central districts. Barcelona is the fourth most-visited European city, the first destination of Mediterranean cruise ships and the seventh largest European airport 5 with more than 55 million passengers per year 6. In 2018, the number of intercontinental journeys by airplane has increased by 10,9% (9,4% on average since 2010) 7 . The number of cruise ship tourists has increased by 12,1% 8 and the number of tourists by 4,3% 9. In this way, Barcelona is on a continuous tourism growth-path ever since the Olympic Games.

Barcelona’s tourism industry and its production model leads to very serious impacts and conflicts for the local society and the environment: 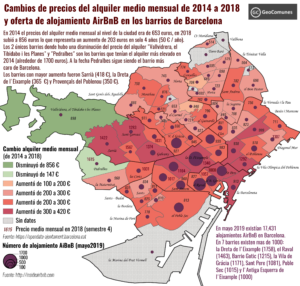 Changes of rent prices between 2014 and 2018 and the offer of AirBnB in Barcelona: Violet circles show the number of AirBnB sleeping places. The darker the surface, the more changed the rents (up to 420 € per month).

The touristic model which is responsible for these impacts is neither free nor natural; it has been created according to the concrete interests of political and economics elites. It is nested in a more global dynamic of the financialization of the economy, and hence, the commodification 10 of life. Financialization captures the growing dominance of finance in the economy and the lives of people. Some examples are real-estate speculations, the increase of rents and the dispossession of public spaces which respond to a dynamic of commodification and financialization which compromises the right to housing, the right to the city. Big investment funds and banks, with complicity of the State, concentrate the benefits of this system while they cause and externalize (or socialize) the losses and negative consequences they produce 11.

In a capitalist context, despite being a booming economic engine, the tourism sector, apart from other things, is currently responding to the logic of productive and financial accumulation where life remains at the margins and not in the centre. This, by means of speculation on our conditions of life through the decrease of wages, precarization at work, intensification of labour journeys, the worsening of labour conditions; compromising the health of workers an the environment 12.

In fact, the last years of coordination between collectives and entities, as well as the increasing hardships and evident touristification process, has caused a turmoil in the public opinion on the perception of tourism in Barcelona. Historically, the official perception held by those responsible for this process (the private sector and public institution) can be summarized as “tourism is good for everyone because it produces wealth and jobs”. But today, mass tourism is essentially seen as a problem of capital in the city and forms part of the population’s biggest social preoccupations. 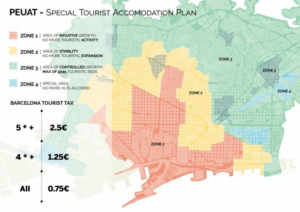 As a result of this change, the aforementioned responsible sectors have had to change their discourse. The private sector initially tried, without success, to blame the organized movements and is referring to them as mobilizers of “tourist-phobia” 13. At this moment, business owners are trivializing the concept of sustainable tourism and use the classist discourse of quality tourism. This does not resolve anything because the problems are not a matter of quality or tourist behaviour, they are a matter of size, disorderly markets and power relationships.

The local government is making steps, in recent years it has been formed by means of a municipal candidacy partly arising from social movements and including a program that reflected part of their demands. Mostly, it has kick-started critical discourses with the tourist sector at an institutional level and for the first time, some interesting but moderate measures have been proposed. But in the end, as the mandate progresses, the local government seems to have settled with the idea of managing the process of touristification without aspiring to stop or effectively reverse it.

The Airport as Catalyser of Global Tourism in Barcelona

The growth of tourism and real-estate (oriented towards a floating population) in Barcelona cannot be explained without mentioning the infrastructure behind global and regional access, allowing the movement of tourists, temporary residents and investors. International aviation has been crucial for the development of Barcelona as one of the main tourist destination in the Mediterranean periphery. This process was possible thanks to various political and economic factors: the public investment in airports and incentives for airlines, the non-existent taxation of aviation, the liberalization of the aviation sector resulting in the ability to purchase cheap tickets and the increase of European and international airline connections. 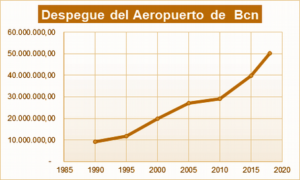 The fact that 82% of tourists arrive in Barcelona by airplane 14, along with an exponential increase in the number of international arrivals, seems to be the main catalyser of the production of global tourism. In the last 2 decades, the amount of travellers recorded at the airport of Barcelona has increased by more than 20 million. This has facilitated a 17% increase in Barcelona’s tourism over the last 5 years.
This system of mobility has strong environmental implications, it is estimated that the transport by air plane represents 75% of the carbon emission from tourism in Barcelona (the total emissions include transport, accommodation and tourist attractions) while 92% of the carbon emissions from tourism in Barcelona 15 can be allocated to transport as a whole. A tourist who arrives in Barcelona by air plane consumes 605,7 kg of CO2 on average instead, a tourist who arrives by train only consumes 52,9 kg of CO2 16. Long distance flights have a very significant effect, approximately 25% of tourists arrive in Barcelona by means of a transatlantic flight and they alone generate 58,2% of the carbon emissions associated with touristic transport 17.

In this way, the airport of Barcelona contributes to the exposure of high environmental pollution to many residents in Castelldefels, el Prat y Gavà. The WHO (World Health Organization) has recognized the noise pollution of airports as a serious public health problem which can result in hearing loss, communication problems, concentration problems, sleep disorders, cardiovascular problems and mental health decline 18. 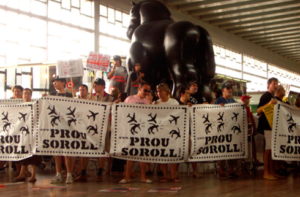 Based on ICAO (International Civil Aviation Organization) forecasts on international aviation growth in the next decades, a lot of governments justify the construction of new airports, terminals or the extension of landing strips. Spain’s national Ministry of Development and AENA, a state-owned company that manages the general interest in airports and heliports in Spain, plan the expansion of Barcelona’s airport in order to meet a demand of 25 million passengers more (mounting to 70 million passengers). An operation which will include the Girona-Costa Brava airport 19.

The recent Tourism Marketing Strategy Plan, promoted by Barcelona Tourism on behalf of the City Council, complements on the territory the enormous tourism growth planned by the infrastructure expansion. Once again by the false promise of de-concentrating tourism to reduce its impacts, the affected territory is enlarged to continue growing in already touristified areas and to start the process in others not yet been exploited. After the generalization of the problem from the centre to most of the neighbourhoods, now they define as the tourist destination not just the city, but the full demarcation of Barcelona, overflowing its municipal boundaries. If tourism and touristification are essentially about territory and mobility, the infrastructural growth coincidentally allies with this extension of the battlefield.

The amplification of this infrastructure, along with the increase of cruise ship ports, will deepen itself even more in the disequilibrium between the touristic exploitation of the city and residential life – which has been and still is settled with the expulsion of the second by means of the first. Because of this, the contribution of tourism and air transport to the climate crisis will be disastrous.

The management of Barcelona’s “access-ports” is supervised by the Spanish State where Barcelona’s City Council only has residual bargaining power. This means that the future of aviation and urban coexistence remains far from the influence of Barcelona’s population.

Given this diagnosis, the social movements call for the Degrowth of tourism and aviation!

1Ajuntament de Barcelona (2017): Estratègia de mobilitat turística de Barcelona.
2Idem (3)
3Cambra de Comerç de Barcelona (2018) Observatorio de tráfico aéreo de Barcelona: Informe trimestral, Diciembre 2018.
4AENA (2019) Informe 2018.
5Idem (3)
6Port de Barcelona (2019) Estadísticas de tráfico acumulado Diciembre 2018
7La Vanguardia (2019) “Barcelona recibe más turistas extranjeros y dejan más dinero”. Acceso el 19/05/2019
8Financialization is a process and contemporary phase of the capitalist economy in which finance has become extremely powerful, penetrating the daily lives of people as well as political decision-making on international, national, regional and local scales. It is based on the speculation on different financial products which are not related to the real economy. These products are bough and sold, generating capital gains of a “fictitious” origin since they are not related to the value of a material good but to its future value. https://odg.cat/es/financiarizacion/
9‘La falsa solució turística concentració de beneficis i deute social’, Marta Ill Raga (Observatori del Deute en la Globalització). https://odg.cat/publicacio/turisme-deute-social/
10‘Situació , característiques i efectes del treball en el sector turístic a la ciutat de Barcelona’, E. Cañada et al. (UPF & Greds Emconet). https://ajuntament.barcelona.cat/turisme/sites/default/files/1901_informe_upf_mercat_laboral.pdf
11These are processes of accumulation by means of dispossession, as defined by the Marxist geographer David Harvey who explains different methods of capital accumulation (privatization, financialization, etc.) which allow the capitalist system to prosper and maintain itself over time. This also generates repercussions for the sectors impoverished by capital’s crisis of overaccumulation. See: Harvey, D. (2004) The New Imperialism
12In response to this global touristification tendency, movements are responding and collaborating beyond their own territories. An example is the SET (south European cities and territories against turistification) network. ABTS (assembly of neighbourhoods for a sustainable tourism in Barcelona) is a member of the SET network along with 20 other entities and collectives who have share the same critical view of turistification and struggle to influence its reversal.
13 A concept invented to criminalize social movements and mobilizations who are against mass-tourism and its harmful impact.