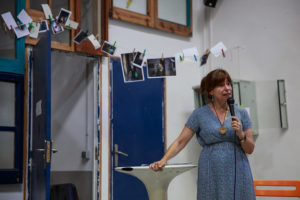 Summer has passed, and with it lots of holidays and travelling. Many people went away for a few weeks. The seas have been be filled with cruise ships, the mountains were full of hikers, there have been enormous queues at museums… Roads, planes and trains were full of people who want and can travel.
Millions of selfies. Hundreds of thousands of journeys, litters of burned petrol, dry territories whose population transiently multiplies several times, temporary workers who broke their backs making beds and scrubbing rooms for a miserable salary. Tourists. Someone will keep track of how many of them arrive and how much they spend. The numbers are translated into the GDP and governments, at all levels (local and state), can proclaim – jubilantly – the increase in the number of people who arrived and the amount of euros they spent.

Daring to travel without being tourists

On the dark side, the other trips, the unwanted ones. They are not tourists. They are people who escape from overexploited places, from violent societies, from poverty. We do not know their names nor exactly how many they are, and we now have even less information since the EU and the member states have decided not to rescue them and even punish those who do so. They hope their journey will be one-way, but sometimes they return home for free; perhaps not even ending up at home, because the deportations do not seek to take people home, but simply to expel those who are not wanted, dropping them anywhere. They don’t photograph themselves. They don’t pose. Rather, they pretend to be invisible. At best an involuntary image of dozens of people crowded in a fragile boat or perched on a fence, topped with razor wire, will appear somewhere. At worst, the image of a lifeless body on a beach.

The hoards of tourists contrast with the thousands of migrants who try to cross militarised borders that separate invisibility from exploitation. In refrigerated trucks, piled up in canoes and dinghies, the evicted of the world risk their lives – and often die – for daring to travel without being tourists. They do not cross the border as easily as the minerals, goods, food or investments that come from the places where they were expelled. Yet, more and more people are undertaking such forced journeys.

Without ignoring the legitimacy of any person to move anywhere, there are various economic, political, social or cultural factors that force migratory fluxes. And at the heart of these factors, as their fundamental physical cause, lies the environmental crisis. Changing climate, for example, forces people to move simply because of habitat degradation or disappearance. No-one can live in flooded areas, in territories devastated by increasingly frequent and intense storms and tropical cyclones. Some places are transformed into real ovens in which life becomes difficult: fires, air pollution… All these changes affect the availability of water, the productivity of crops and pastures, and the loss of ecosystem services that inevitably impact the economies and living conditions of many living beings; in many instances, in turn giving rise to conflict and violence. 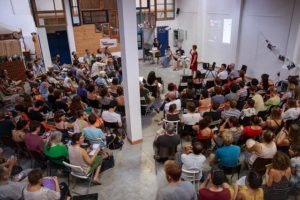 According to the World Organisation for Migration, there are 68.5 million people in the world forcibly displaced. OXFAM states that between 2008 and 2016 there were 21.8 million internal displacements due to extreme and sudden climate events. The Norwegian Refugee Council’s Internal Displacement Monitoring Centre calculates that in 2017 16.1 million people were displaced due to the climate.

A recent article declared that “Africa, with 13% of the world’s population and 6% of the global GDP, is the continent that will warm up the most, despite only emitting 3% of the total greenhouse gases. Glaciers melt in the Himalayas, where major rivers start. Additionally, the sea is driving out the people who inhabit the islands of Oceania. In Jakarta, Indonesia’s capital, millions of people will have to leave the city because it is sinking. The same problem faces the Netherlands. 200 million people will find themselves forced to leave their homes because of the destabilisation of the climate before the middle of the century.”

Spain is a country tremendously affected by the ecosocial crisis. Completely dependent on others for energy and minerals, it is heating up at twice the speed of other European countries. Desertification is growing. In the southeast of the Iberian Peninsula, Málaga, Granada, Almería and Murcia are the areas most severely affected by the climate crisis, but in the more central agricultural areas some crops are becoming unviable due to soil degradation, water stress and rising temperatures. Step by step the first internal displacements are beginning to take place, but the ecosocial crisis goes socially and politically unnoticed by the majority of the population.

Extractivism also expels people. Under colonial logic, there are territories that have historically been used as mines and dumps, with brutal consequences for local communities and their people. In practice, extractivism has been and is a mechanism of looting, expulsion, and colonial and neocolonial appropriation that has stained the economic, social and political life of many countries of the Global South. The history of Latin America, for example, is permeated by this doctrine. Every year hundreds of people are murdered for defending the Earth and opposing extractive or energy projects.

The difference between goods and people

From on high, the powerful propagate false news reinforcing damaging prejudices. Most migration takes place between the countries of the South; only a small part of the people expelled follow the same path as the raw materials plundered from their territories. However, the idea of the threat to the rich world is repeated constantly. The same people who label as anti-tourist those denouncing the processes of gentrification and the expulsion of local residents in order to hike rents, and the transformation of city centres into a brand or a showcase, also criminalise those who try to jump fences and reach places they perceive as safe.

The Cameroonian Achille Mbembe coined the term necropolitics, which he describes as taking hold when the difference between human beings and merchandise disappears. Bauman highlights that migration and asylum policies, not only in Europe but also in the United States and Australia, have become an industry of human garbage. They are integrated into an economic rationality that considers human beings as replaceable and disposable.

The fact is that the bountiful European Union would not be able to sustain itself if the fence surrounding it did not allow in energy, materials, food and/or manufactured products, in addition to not letting in migrants. All countries that consider themselves developed and rich live with far more resources than there are within their own territories. The expulsion and abandonment of an ever-larger impoverished world within and beyond our ever-growing borders is required for the Global North to exist as we know it.

What is a humanitarian problem caused by exploitation and looting becomes a security problem. An enormously violent economy makes a good part of the population redundant. It exposes them to deadly dangers and confines them to limited territories, exclusion zones, in which securitising and imprisoning then become a business. Transformed into human garbage, many people are treated as the raw material for the business of borders and internment centres. This is yet another form of extractivism for disaster capitalism.

Neofascism criminalises, stigmatises, dehumanises, abandons and kills surplus people with a narrative and scenography that seeks to socially legitimise extermination. The European Union criminalises, stigmatises, dehumanises, abandons and kills surplus people within the politically correct discourse of rights, based on the clean and technocratic ‘rational’ social engineering of the globalised capitalist who considers that lives and territories matter only in terms of the ‘added value’ they produce. Moreover, the left has no response nor a strong counterargument appropriate to the gravity of the situation. Solutions are sought within the established order, which is impossible. If we go on like this, many of us might at some point become forced tourists, even if we cannot imagine it now.

The latest scientific information warns of the severity of the situation. The decline in the availability of fossil energy and minerals, the catastrophic scenarios of climate crisis, the geopolitical tensions over resources and the processes of expulsion of many people to the edge of society (or even outside it), force us to urgently undertake transitions that, supported by equity and justice, make it possible to face the already irreversible changes and stop those elements of deterioration which can still be stopped.

Conventional capitalist and economic thought cannot solve the present and future challenges of the world economy and, above all, of daily life. It is impossible to hope for eternal growth, which is the basis of capitalism, bypassing the planetary limits, even if this growth is claimed to be ‘green’.

We are in a period of emergency and exception. It is possible to face this crisis in a just manner, but on the basis of radically different societies and economies. Putting the issue on the table, without hiding behind declarations of rights that do not materialise, is, of course, an essential starting point.