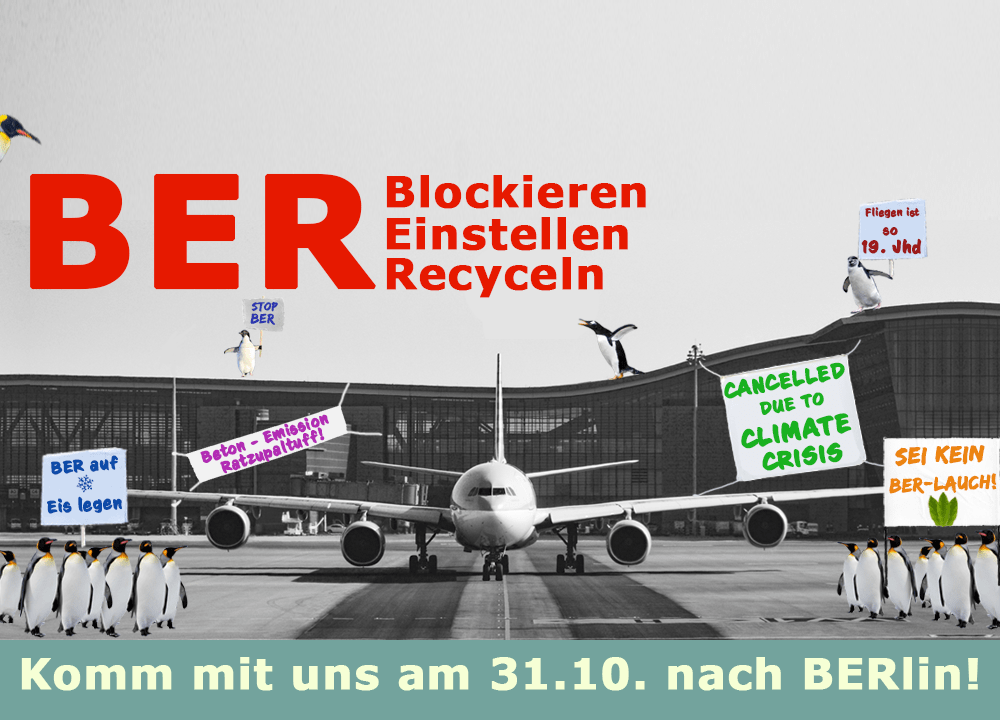 BER – Block it, End it, Recycle it

The penguins´ call to action in BERlin, Germany, from Oct. 30th to Nov. 1st. Organized by the German activist group “Am Boden bleiben”

It is hard to believe: In spite of the increasingly threatening climate crisis as well as ten years of failure, Berlin plans to open its new airport on October 31st. Air travel accounts for up to 10% of Germany’s climate impact already – caused by a small percentage of frequent flyers and an unjustly advantaged industry.

Block it: There will be a protest against the opening of BER with a mass action – determined, disobedient and with an appropriate hygiene-concept. Join the penguins from Oct. 30th-Nov. 1st in Berlin – because the coolest birds stay on the ground. It is not the goal to block individual passengers but to dismiss an unjust and climate-damaging industry.

End it: We will put BER on ice in support of a sky that stays blue even after corona-times, and prevent noise pollution as well as emissions from taking off again. The reduction of airports and air travel, particularly in the global North, has to go hand-in-hand with a radical change in economics, our ways of working and our lifestyles. If we fail to overcome this compulsively growing capitalism and its inherent hyper mobility, it will be impossible to take serious action against the climate crisis or to provide global social justice as well as freedom of mobility.

Recycle it: The building and area of the BER could easily be re-used as a community- and leisure center. It could also be repurposed as a “museum of fossil capitalism and outdated mobility”. The massive amount of tax money invested in the aviation industry – which benefits only a few – has to be redirected towards a climate-just mobility for everyone. The cost of BER adds up to around 6 billion euros, the Lufthansa company recently received a bailout of 9 billion euros, and the lack of a kerosene- and value added tax results in gains of approximately 13 billion euros for the airlines per year. Only a small number of companies and frequent flyers are profiting: In Germany, only 7% of the people are flying 10 times or more per year – predominantly wealthy people. The majority rarely or never takes the plane, and instead uses bikes and public transport on a daily basis. Come and join us in the struggle for a climate-just mobility for everyone!

Find more information in German about the action consensus, the hygiene concept, and the penguin’s demands.

Find this call to action as PDF-file here.