Karad, Maharashtra, India, September 4th, 2019: For 36 days, small-scale farmers have been protesting days and nights with a sit-in in front of the district’s planning administration (Satara Collector Office) against the expansion of Karad Airport in Maharashtra State, India. The farmers had started the sit-in (Thiyya Aandola) on 29th of July and announced to continue their protest until the government meets their demands and cancels the expansion project. This agitation is the latest in the ongoing resistance of farmers opposing the airport expansion for more than 8 years. The protests take place under the aegis of the socio-political organization Shramik Mukti Dal. 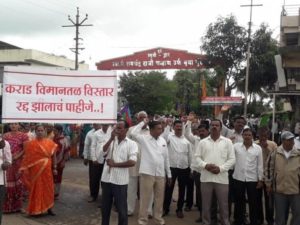 3200 acres of fertile land under threat
The farmers claim that the expansion will not help the development of the district, but on the contrary, will lead to the impoverishment of the farmers: For the expansion of an existing airstrip into a full fledged airport next to the city of Karad, fertile and irrigated farm-land will be acquired. According to Vinayak Shinde, spokesperson of the affected villagers and activist of Shramik Mukti Dal, 3200 acres of farm land cultivated with an irrigation-system are under threat. Critical infrastructure for the irrigation system is located on the land to be acquired.

“To develop this irrigation scheme people from village Warunji, Kese, Munde, Padali, Gote and Supane have worked for more than 50 years. If the land acquisition is carried out this will be huge loss for about 25.000 people who depend upon this agriculture,” says Vinayak Shinde.

“Karad is a town with more than 70,000 people. No one from Karad has ever demanded the expansion of the airport. There are no industries in Karad, so commercial air services were never introduced on this airport since inception,” farmer leader Ashok Thorat explained already in 2011 to DNA India. “The airport is just for air services of the ministers and public representatives once in a while,” he added.

Economic risks: Is the airport really necessary?
A pre-feasibility report (see Government of Maharashtra Report No.2, 2017, p.61-62) raised concerns regarding commercial viability due to the close proximity (70km) to the operational Kolhapur airport. The Maharashtra Airport Development Company Limited that was put in place by the State Government to construct several airports even proposed to withdraw the project because of commercial non-viability. Apart from the economic concerns, the farmers also list other arguments against the airport:

Former Chief Minister of Maharashtra, Prithviraj Chavan, had proposed the expansion project in 2011 and created political pressure on the local authorities for the expansion that would presumably benefit his party workers. According to the affected farmers, local authorities are showing unnecessary urgency in land acquisition, giving the final notice of land acquisition without former notices. For the award, in 2016, local authorities took signatures of three members of a single family belonging to a party worker of Prithviraj Chavan out of 1100 affected by the project.

The farmers thus unmask the award as illegal act of the local authority. “Even with continuous democratic protest regarding the needlessness of the project, from year 2012 till date nothing is done by the government in our favour,” says Vinayak Shinde. The farmer’s concerns were also submitted in detail to the local authorities (SDM Karad, Satara Collector, and CMO office).

Incompatibility with policy
Karad Airport lies just two kilometers away from the city of Karad. According to the Airport Authority of India, developments of airports should be at least 15 km away from a city. Already in 2011, Bharat Patankar, President of Shramik Mukti Dal pointed out, that the expansion of the Karad Airport violates the national resettlement and rehabilitation policy, which prohibits acquisition of irrigated farmland.
The airport also lies closely to the Munde electricity station in Karad, which is the main station of electricity transfer from the Koyna hydroelectricity project. The tall electricity towers in the surrounding of the planned expansion could be a risk factor for aviation.
Stay Grounded stands in solidarity with the affected farmers.
STOP KARAD AIRPORT EXPANSION
STOP ALL AIRPORT EXPANSION
We use cookies on our website. By clicking “Accept”, you consent to the use of all the cookies, but they are really just essentials, nothing that tracks you.
Cookie settingsACCEPT
Manage consent