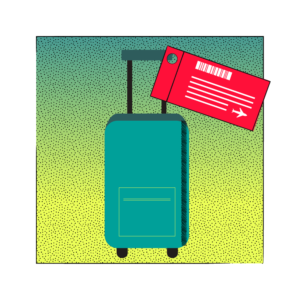 “The jet-setting habits of Bill Gates and Paris Hilton mean that they produce an astonishing 10,000 times more carbon emissions from flying than the average person”, finds a recent study.i 1% of English residents are responsible for nearly 20% of all flights abroad; 10% most frequent flyers took more than half of the flights abroad.ii Flying shows climate injustice in its most extreme form—a few wealthy are most responsible for the harm, while large majorities worldwide never or rarely fly. Two possible measures could tackle this injustice: a Frequent Flyer Levy (FFL) or an Air Miles Levy (AML).

The taxes discussed in the previous chapter are meant to reduce aviation industry’s unfair tax exemptions. The issue is that these taxes remain the same across the board, hardly affecting upper class frequent flyers. But why should a businessman on his sixth flight to his Tuscan villa in one year be taxed at the same rate as someone who flies to visit family on another continent every second year? Could the taxes be combined with a levy targeting the small, privileged minority responsible for most flights and distances? Could such a levy constrain the demand for multiple or long-distance flights?

The Frequent Flyer Levy (FFL) proposes to make each flight taken within a given time period progressively more expensive, thus incentivising fewer flights. The FFL has been promoted for many years by the UK organisation, A Free Ride,iii with a campaign for ‘a free flight a year’, meaning a ‘levy free flight’. However, if every person on Earth flew once a year, climate emissions would skyrocket. Therefore, a slightly different model is proposed in this chapter, progressively raising higher fees during a longer time period, and also imposing higher levies. One option could be to have one levy-free first flight every three or four years, the second flight would have a levy of e.g. 150 euro, and with each additional flight the levy doubles. In the best case, the rates would be different for economy than for business or first class tickets, because first class seats produce up to seven times the emissions of an economy ticket.iv

The Air Miles Levy (AML) makes distance flown progressively more expensive and arises from an October 2019 reportv commissioned by the UK Committee on Climate Change, which evaluated the FFL and other means for reducing aviation. The AML becomes more expensive in steps of cumulative distance flown during a 3 or 4 year period, and would also impose higher rates for business and first class, or very high ones for private jets. Carmichael explains in his report: “By factoring-in distance, the levy would be more closely linked to emissions [than the FFL] and fall more heavily on those polluting more. It would also more effectively discourage long-haul flights: as most flying is for leisure, some shift from long-haul to short-haul destinations would be expected, delivering further emissions reductions.”

Because lower income groups fly the least, the FFL or AML would mainly affect wealthier people. Depending on the level of the levy, the FFL could considerably reduce frequent flying. However, in and of themselves, these levy schemes are probably not sufficient in addressing the aviation sector’s environmental impact. They must be combined with other measures discussed throughout this report. In particular, they should be combined with policies aimed at ending aviation’s privileges and at fostering alternative transport modes, both (night)trains and climate-friendly ships for long-distance travel (chapter 6). The revenues obtained through the FFL or AML can be used to make climate-friendly mobility accessible for all, especially in the Global South. Also, a just transition fund could be founded for those regions who suffer from economic losses by a decreasing tourism sector. The levy could therefore contribute to climate justice.

No FFL or AML measures are currently implemented, as the few existing instruments tax every ticket/person equally. However, in other sectors some examples of progressively taxing environmentally damaging consumption do exist. One is the UK’s Vehicle Excise Duty, which put an escalating tax on cars according to their carbon emissions. It was successful in encouraging car owners to buy smaller, cleaner cars (until it was changed in 2017).

Advantages of Levies of Excessive Flying

The goal of the FFL policy is to contribute to social and climate justice. The numbers are quite clear: even with low-cost aviation on the rise, large disparities and inequalities in aeromobility exist between and within nations, along the lines of social classes, ethnicity and gender. Despite the fall in relative prices, survey data indicate that the vast majority of low-cost flights are taken by more privileged social classes.vi Contrary to arguments from the airlines, in relative terms, the distribution of flying has not become more equitable across social class. Low-cost air travel is therefore not ‘democratising aeromobility’.vii Hence any tax on aviation would be relatively progressive, if one takes the entire population into account.viii Globally, only 3 per cent of the population flew in 2017, and some 90% of the global population has never flown.ix In Germany, only 8% of the entire population fly more than twice a year.x This means that very few frequent flyers cause an enormous amount of climate impact. These numbers demonstrate the importance of focusing on the hypermobile elitexi in the efforts to degrow the aviation sector.

The purpose of an FFL or AML is not to try to factor in the social cost of carbon to the price of a ticket. Instead, the levies are targeted to deliver a specific outcome: reduced demand for air travel against unconstrained levels, to help restrain aviation emissions within safe limits for the climate, and to do so in a way that is just and potentially politically feasible. FFL or AML are per design more progressive policy instruments than a kerosene tax, a ticket tax or a carbon tax. One key advantage is that the levies might be more socially acceptable than general increases in taxes on aviation or kerosene, due to the disproportionate impact on wealthy frequent fliers, and thus potentially politically more attractive. A survey on public attitudes to the FFL in the UK found that a FFL is perceived to be fairer than and preferable to any of the other options for reducing air travel—although it has to be kept in mind that the FFL model in UK promotes a pretty low levy and a ‘free flight a year’, instead of every couple of years.

The primary focus of the FFL on the number of flights can be decisive for communication purposes. While in combination with other policy measures flying will become more expensive and restrictive for all, the FFL ensures that this is particularly so for frequent flyers. Low income passengers who want or need to take a long-distance flight once every couple of years—such as migrants visiting families in other continents—are not the primary target of this levy. Reducing the number of flights is also the key demand of communities impacted by noise around airports. However, the FFL falls more heavily on people taking several short-haul flights than on those taking fewer but much more damaging long-haul flights. A flight from London to Melbourne Australia has approximately 15 times the impact of a London-to-Barcelona flight.xii

By targeting cumulative distance flown, the AML targets those who pollute more, so it is closely linked to emissions contributing to the climate crisis. It encourages shortening one’s average travel distance, and discourages more than one long-haul flight every few years, something a straight carbon tax or FFL does not do. In this regard, the AML might be more fair in climate-terms than the FFL. A disadvantage might be that the AML might not inhibit people from taking short-haul flights which could be easily shifted to trains or buses—while longer trips that might be necessary for some who have family in other continents cannot easily be replaced because of the current lack of climate friendly and affordable ferries. Carmichael points out that with an AML, people will avoid shorter trips, in order to not rack up miles that will increase the levies charged on their longer trips. To what overall relative degree an FFL may inhibit short-haul more than an AML has yet to be studied.

Obstacles and challenges to implementing the levy

As with all other policy proposals aimed at degrowing aviation, there will be massive and coordinated opposition from the aviation industry and, in the beginning, from politicians and the general public. Regarding the FFL and AML, however, one should expect resistance from the most powerful in society, the mobile elites that do not want to give up their privileges, including many lawmakers. This is supported by studies that have shown that a large share of aviation emissions are caused by a relatively small group of highly mobile and hypermobile travellers that usually represent the political, economic and cultural elites of society.xiii There is a crucial job of raising public awareness of the fact that climate targets cannot be met without constraints on air travel, and to also build opposition against the irresponsible and powerful frequent flyers. Meanwhile, more sustainable modes of long-distance transportation must be made attractive to support a change in public opinion.

One disadvantage is that for those wealthy enough to be largely insensitive to price, neither FFL nor AML may be sufficient to reduce their flying habits. Here, another kind of regulation would be necessary, such as a general ban on short haul flights that affects all flyers equally, or of course measures that tackle inequality and wealth as such.

One issue concerns the framing of the levy: Campaigning for ‘one free flight every 3 years’ might make the law more popular; however, it suggests that one flight in this period is a human right, while it is actually also too much if planetary boundaries are to be respected. Thus, in communicating a levy proposal, it is important to clearly distinguish it from and communicate in combination with the other taxes that are necessary to degrow aviation in the face of the climate crisis in general; the FFL/AML being an additional instrument aimed specifically at frequent flyers.

There are a number of challenges that need to be addressed if one wants to introduce a levy. The levy could in principle be operated in every country, ideally as a globally uniform tax. However, due to a lack of strong international institutions which could impose such a levy (there are no global taxes/levies yet), it could first be implemented in individual countries or regions, like on an EU-level. In this case the levy would be determined at the EU and collected nationally. The levy would apply to both domestic and international flights.

Tracking unique passenger characteristics to calculate the levy might require new systems. The introduction of a levy could steer a critical debate regarding data protection, as flight data would have to be stored. An alias-based system, that uses identity codes to secure comprehensive protection of data security could possibly provide a solution. A levy scheme needs to ensure that airlines’ sharing of this data among themselves is restricted to levy purposes only. This could be regulated by the standard aviation authorities.

A levy might be more complex to administer than the current or alternative aviation tax arrangements. This was the pretext used by the Scottish Government when refusing to consider an FFL as an alternative to the Air Passenger Duty. Implementing a levy will entail changes to the customer journey when purchasing plane tickets, which the industry will try to resist. That is why it needs to be made as simple as possible.

Gössling, S. (2019). These Celebrities Cause 10,000 Times more Carbon Emissions from Flying than the Average Person.

Find the while literature list in the report Degrowth of Aviation, p. 45-47.