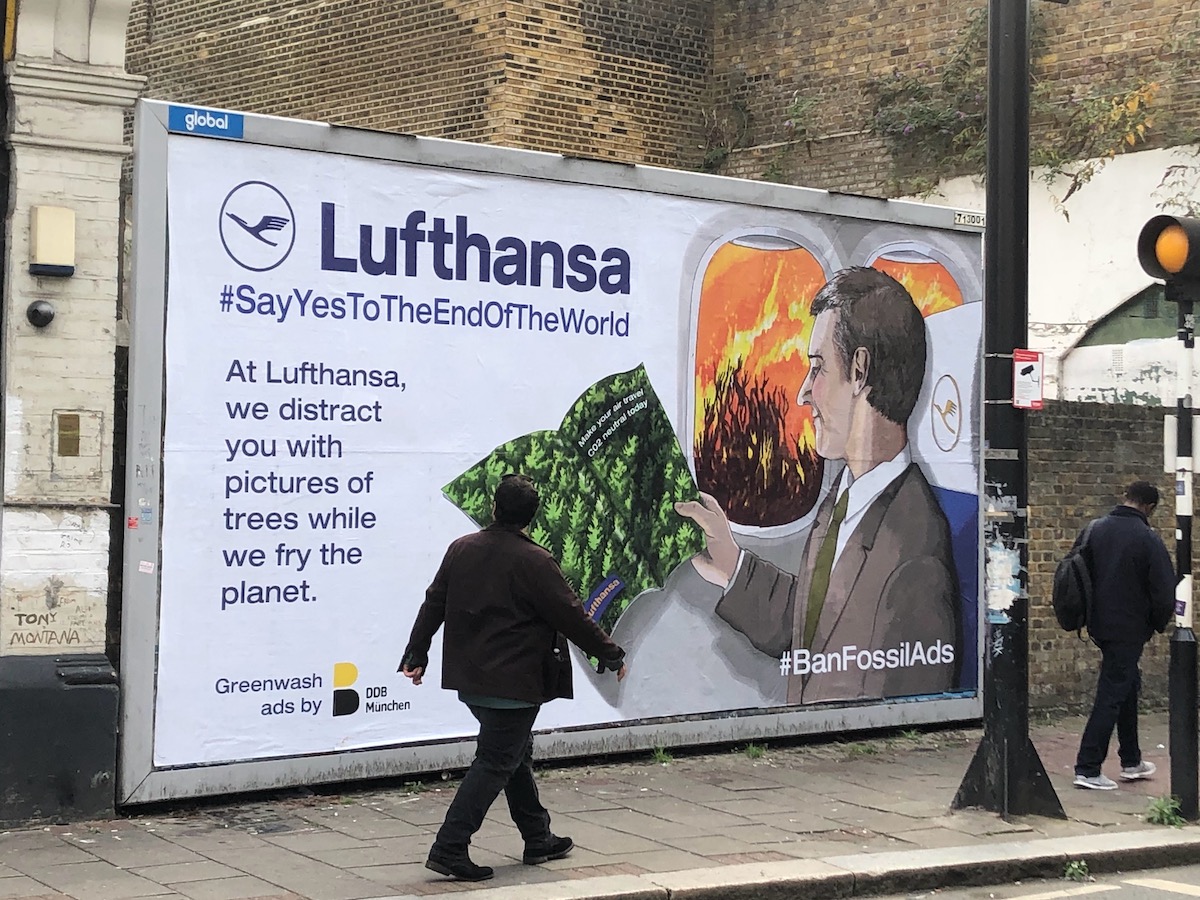 After a summer of record breaking temperatures exacerbated by global heating, advertising billboards across Europe have been hacked with more than 500 satirical artworks, unveiled today, to highlight the role of airline marketing in driving up greenhouse gas emissions.  Campaigners are calling on the EU Commission to introduce tobacco-style advertising bans to curb demand on flights and prevent emissions from rising further. 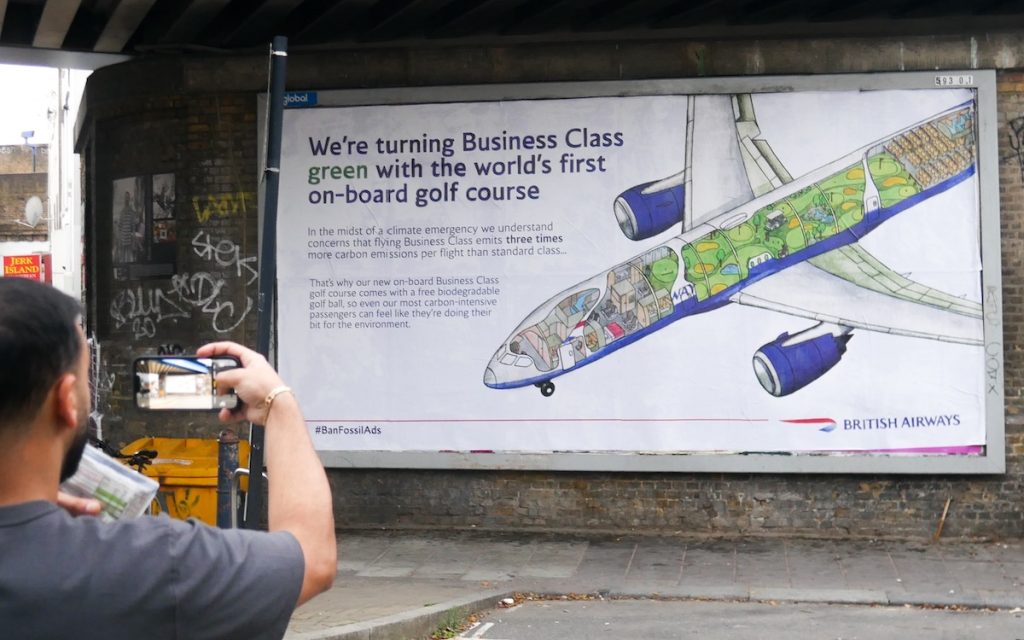 One artwork by artist Darren Cullen satirises the over-sized carbon footprint of Business Class flights, with the text “We’re turning Business Class green with the world’s first on-board golf course.” Another by artist Michelle Tylicki depicts an aeroplane flying over wildfires, with the text “Fly Responsibly?”. Other designs by artists Street Market Subvertiser, Soofiya, Lindsay Grime, Hogre and Matt Bonner call attention to ‘greenwashing’ in which airlines and airports make sustainability claims that campaigners say conceal the actual impact aviation has on the planet.

Climate and anti-advertising campaigners are garnering support, with over 300,000 people signing a ‘European Citizen Initiative’ to ban fossil advertising and sponsorship. [1]

As Europe emerges from one of the hottest summers on record, activists and artists from the anonymous Brandalism group and The Subvertisers International network have targeted airline companies and their advertising agencies on billboards, bus stops and public transport advertising spaces. They highlight the disproportionately large carbon footprint of flying [2], the fact that the majority of flights are taken by a tiny fraction of the total population [3], and that airlines have missed all but one of the sustainability targets set by the aviation industry.[4] 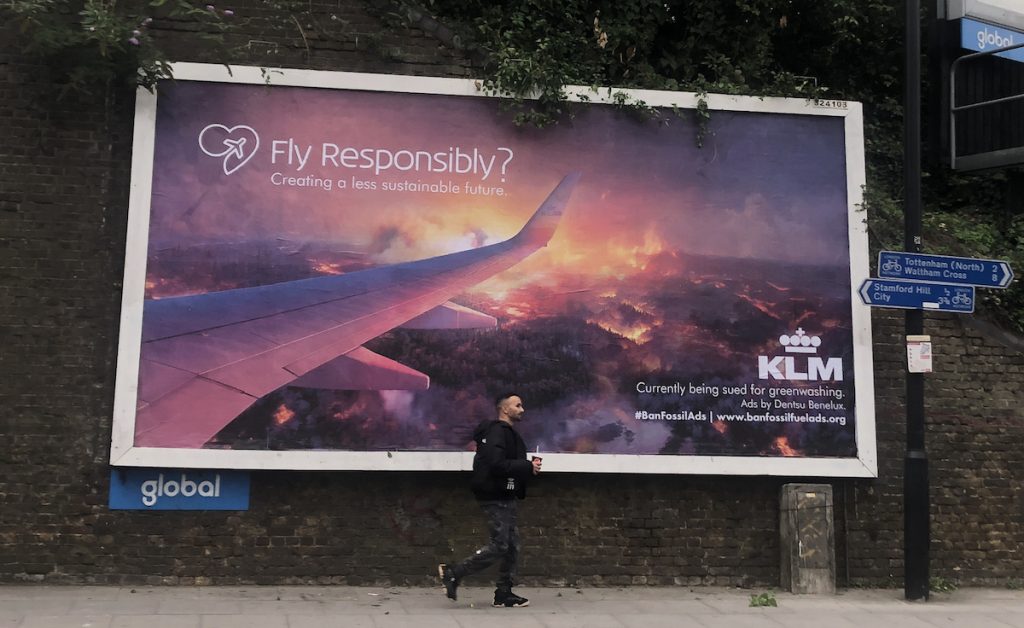 Above: a satirical advert for KLM who are facing legal challenges in the Netherlands for misleading advertising

“The allure and glamour of high carbon lifestyles such as frequent flying has been purposefully crafted by the advertising industry and shows no signs of relenting – despite one of the hottest summers on record. Advertising agencies such as Ogilvy, VCCP, Dentsu, DDB Munchen need to consider their role in driving up emissions for airlines they work for such as British Airways, Easyjet, KLM and Lufthansa. We call on employees in those firms to refuse work for high carbon clients.”

The naming of specific advertising agencies comes as the UN Secretary-General António Guterres blasted the Public Relations industry at the 77th General Assembly in New York on Tuesday 20 September, “Just as they did for the tobacco industry decades before, lobbyists and spin doctors have spewed harmful misinformation.”  [5]

This action comes at a time of growing international momentum behind banning high-carbon advertisements. The city of Sydney, home to over five million residents, has recently become the second major city to ban fossil fuel advertising in public spaces [10], following Amsterdam which became the first city in the world to ban ads from fossil fuel firms and airlines in 2021.

Robbie Gillett, from Adfree Cities in the UK, said:

“Advertising for airlines and airports is driving up demand for flights and trashing the climate. We urgently need to see the creation of viable, sustainable transport alternatives to flying that ensures job security for workers currently employed in aviation. In the meantime, a simple step that government, both local and national, can take is to prohibit advertising for polluting products – for the benefit of peoples’ health, air quality and the climate.”

“Advertising plays a crucial, but often overlooked, role in fueling the climate crisis. By pushing high-carbon goods, such as cheap flights, advertising is complicit in driving carbon emissions higher at a time when we need to see an urgent reversal. Just like cigarette advertisements were eventually snuffed out from the 1980s onwards, governments and regulators need to step up to stop these companies polluting the planet and public space.”

[10] Advertising agencies complicit in working with airlines to promote high-carbon lifestyles and greenwash their image include VCCP for Easyjet, Ogilvy for British Airways, Dentsu Benelux for KLM and DBB München for Lufthansa.