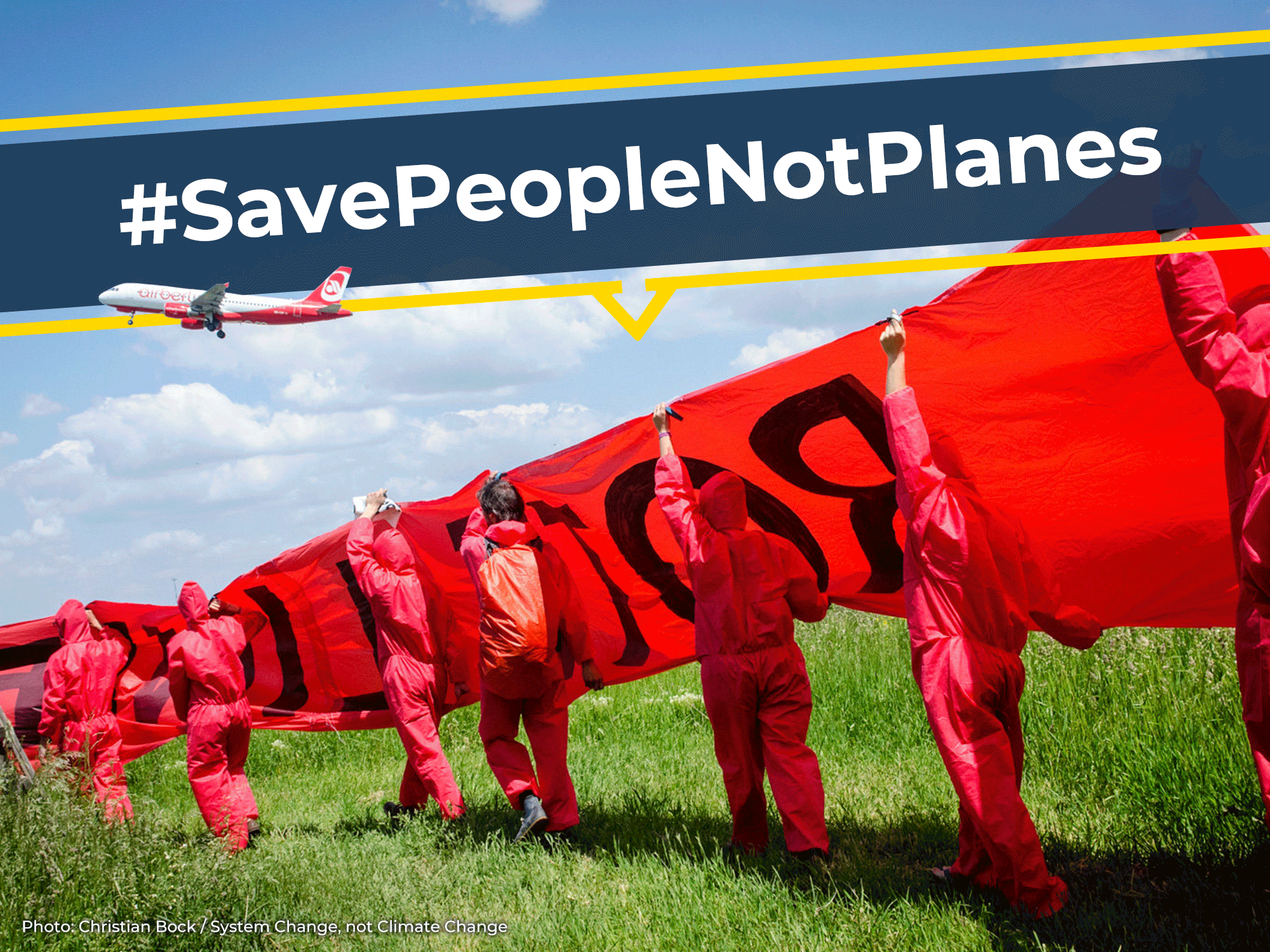 #SavePeopleNotPlanes: Open letter demands that workers and the climate are put first

6th of April 2020 – Today, more than 250 organisations from 25 countries published an open letter directed to governments, urging them to resist any aviation lobby attempts to rush into unfair bailouts of the industry. Instead, governments are implored to use this moment to embed social and environmental conditions, with proper protection for workers and a planned transition towards climate-just mobility. From today onwards, individuals are expressing their support for these demands by signing a rapidly growing petition.

“For decades, the aviation industry has avoided contributing meaningfully to global climate goals and resisted the merest suggestion of taxes on fuel or tickets. Now, airlines, airports and manufacturers are demanding huge and unconditional taxpayer-backed bailouts. We cannot let the aviation industry get away with privatising profits in the good times, and expect the public to pay for its losses in the bad times”, says Magdalena Heuwieser from Stay Grounded, a global network of more than 150 organisations, who endorsed the letter together with other organisations including university institutes, trade unions and climate justice initiatives.

The letter demands that governments:
1) put people first and bail out workers, not shareholders and executives;
2) transform the transport sector in a climate-friendly way, by cutting air travel demand and strengthening low-carbon alternatives like rail travel, as well as by shifting of employment into decent climate jobs; and
3) end aviation’s tax exemptions while putting in place a kerosene tax and fair progressive levies on frequent flying.

The airline industry has made a fortune over the past decades, with higher growth rates than most other economic sectors – what led to soaring emissions. Aviation is already responsible for 5-8% of climate heating worldwide, when we include the climate impacts additional to the CO2. This is a huge portion, given that these are caused by few frequent flyers: the world’s richest 10% uses 75% of air transport energy, a recent study found out.

Tahir Latif from the UK trade union PCS which also represents workers in the aviation sector says: “The collapse of the aviation industry has left workers feeling vulnerable and insecure about their future. PCS and other trade unions are demanding that financial, labour and health protections are directed to aid workers. A real living basic income to enable workers to see through the crisis has to be prioritised above corporate bailouts. We demand public ownership of our transport systems to enable a more humane and coherent response in the case of any similar crisis in the future, and to commence right now the task of planning the just transition of workers to jobs geared toward dealing the impact of transport, particularly aviation, on climate change.”

Pablo Muñoz, aviation campaigner at the Spanish organisation Ecologistas en Acción, states: “While we are rightly focused on saving lives and protecting our communities against the immediate health threat of Covid-19, our governments have a choice: they can hand taxpayers’ money to corporations unconditionally, or they can seize the opportunity to start building an economy which doesn’t harm people or the planet”.

Leo Murray, Director of Innovation at climate action charity Possible, adds: “At this time of crisis, we need to focus on what’s most important: protecting ordinary people and building a more secure future for all of us. Rather than bail out airlines to continue with business as usual, we now have a chance to ensure that they change for the better. In return for government support, airlines must protect their workers, and protect the climate by reducing the sector’s emissions in line with the Paris Agreement target of 1.5 °C.”

Link to website: https://stay-grounded.org/savepeoplenotplanes
Link to petition: www.change.org/SavePeopleNotPlanes-International
Images for free use (naming the credits): https://tinyurl.com/v56r59b