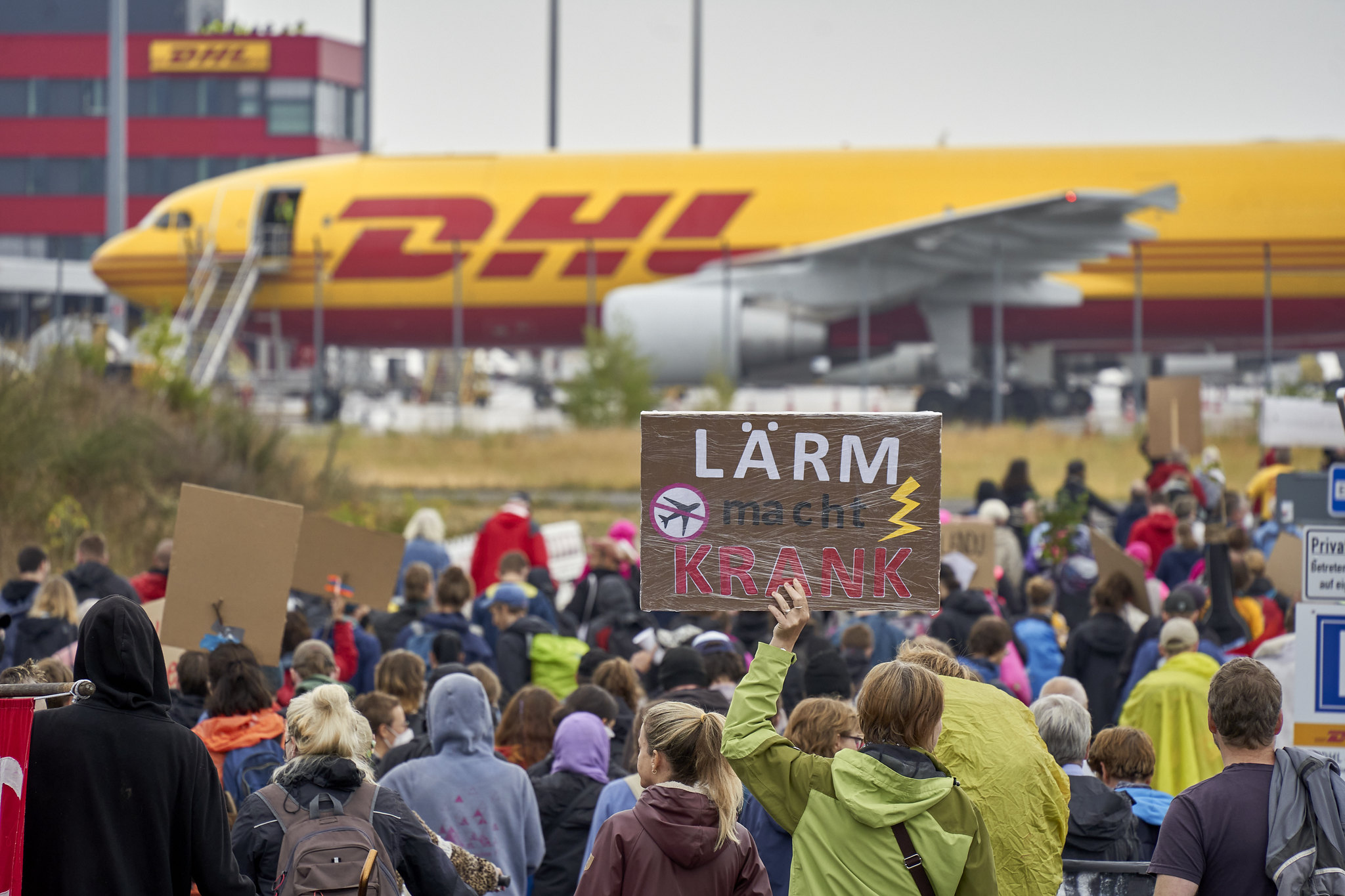 Transformation not Expansion! Transform LEJ recently protested against the expansion of Halle/Leipzig Airport

Leipzig – On July 29, 2022 the new action and protest alliance Transform LEJ held a vigil in front of the state directorate, for opposing the expansion of the airport Leipzig/Halle primarily for the DHL shipping company. The next day, on July 30, 2022, a second demonstration took place in Schkeuditz next to the airport site. Transform LEJ also stands in solidarity with activists awaiting trial from last year’s action against the same airport expansion. The lawsuit was initiated by DHL who is suing activists for more than 1 million euros.

When a flood hit the Ahr valley in Germany in 2021, the extent of the climate catastrophe became tangible for the majority of people in Germany for the first time. This year, hundreds of forests are burning and heat waves and droughts are becoming more and more threatening. Meanwhile, in areas of the Global South, people have already been affected by the climate catastrophe for decades. And in the midst of this escalating climate crisis the Leipzig/Halle freight airport, already one of the most climate-damaging in Europe, is to be further expanded in the interest of the logistics company DHL.

As a new action and protest alliance with the name Transform LEJ, the group decisively opposes the expansion of the airport Leipzig/Halle (international abbreviation: LEJ). With their actions this summer they have made it clear: They want a a social-ecological transformation. Instead of exacerbating the climate catastrophe, ongoing noise disturbance and wasting taxpayer‘s money, the group wants a just transition that includes the interests of everybody. 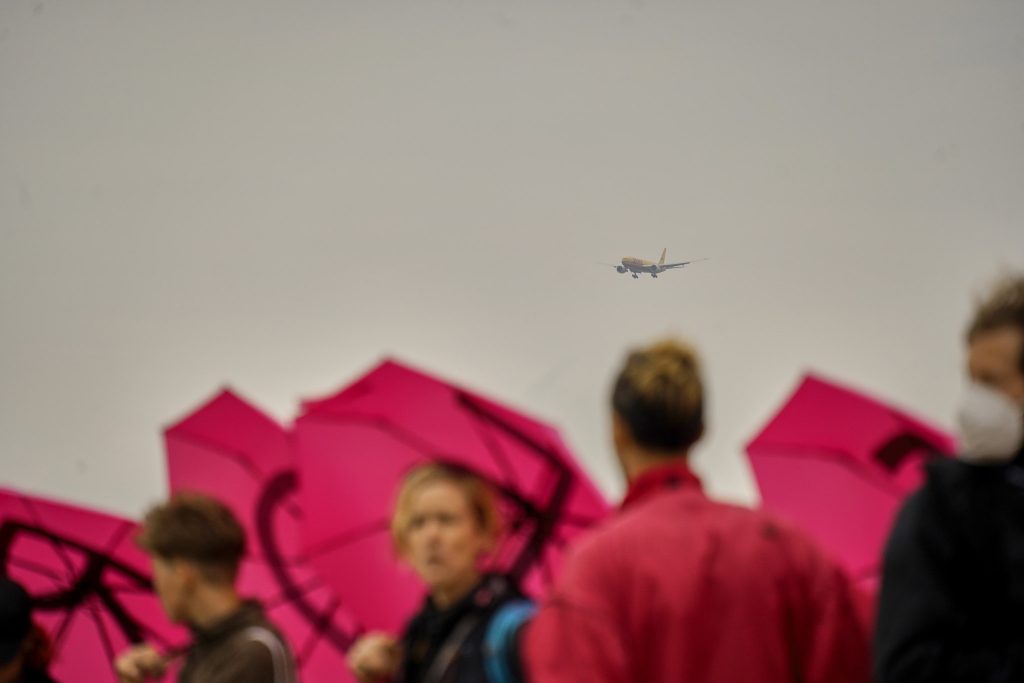 Currently, an approval process is underway in which the Saxony State Directorate is deciding whether the airport may be further expanded in the interest of the DHL company. Therefore, LEJ carried out their protest on July 29, 2022 with a vigil directly in front of the state directorate to make clear their stance on the expansion. Interesting speeches were heard, among others from refugees with the clear demand to stop deportations that take place per aircraft – though not necessarily through DHL – but are #bullshitflights which nonetheless require massive amounts of resources. There were also other speeches from residents and from climate activists in the alliance. It was interesting that the state directorate closed its doors at 8:00 a.m., just in time for the beginning of the vigil. LEJ lamented that they would have liked to have an exchange, but this is apparently not how democratic decisions work in Germany. 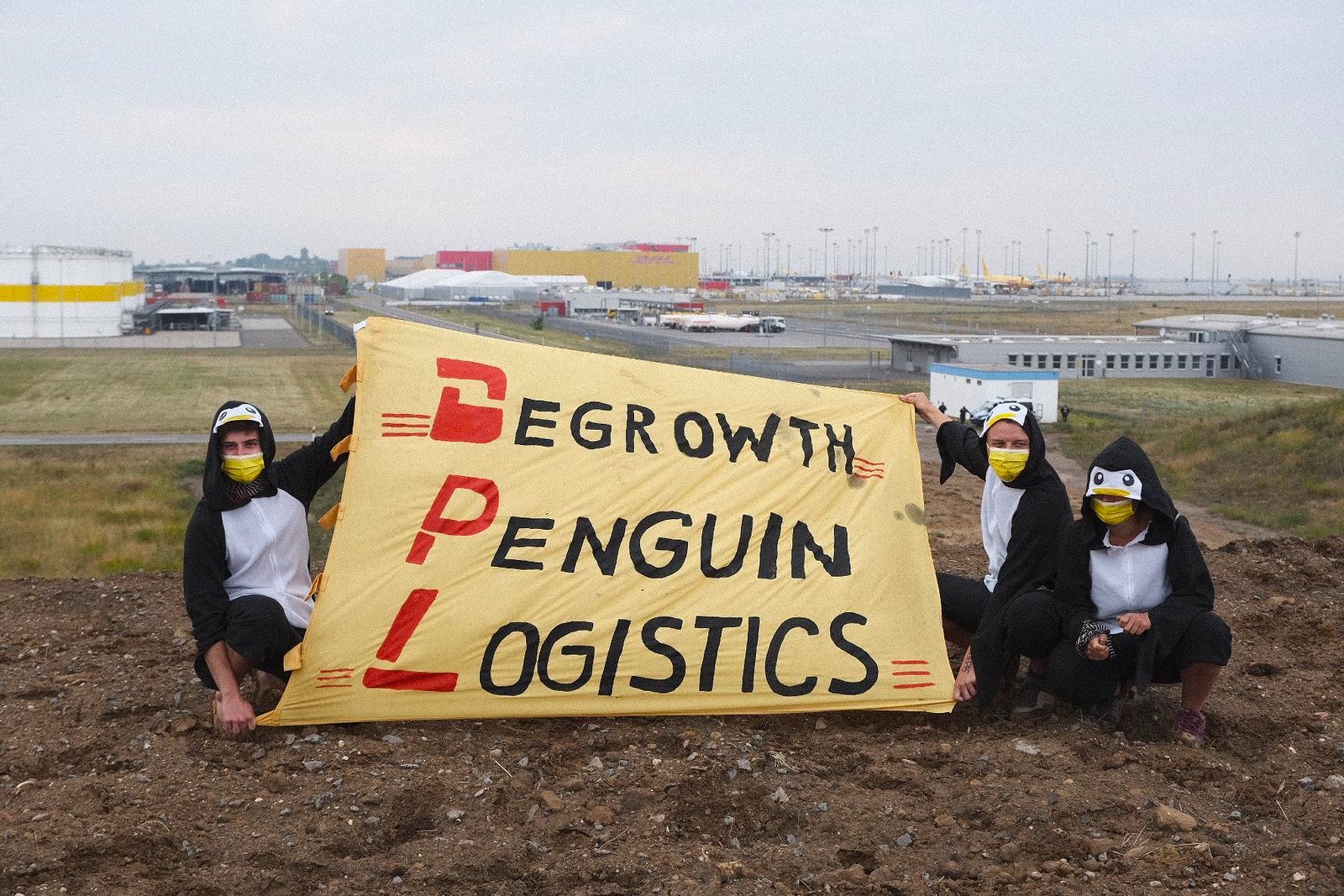 The day after, on July 30, 2022, a colorful and powerful demonstration took place in Schkeuditz, moving from the S-Bahn station to the expansion area next to the airport site. Hand in hand, around 300 residents, including young climate activists, local residents and families marched for climate justice. Some participants dressed up as penguins and walked with a banner reading “DPL – Degrowth Penguin Logistics”. A first highlight was the symbolic shredding of the official documents the airport handed in for the expansion. Residents organised a large tractor that shred the papers directly in front of the DHL company site, making clear what they thought of the airport’s expansion application and the bureaucratic processes.

Last year, activists from the group “Cancel LEJ” blocked a factory gate at exactly the same place, and as a result experienced severe repression from the police. Participants had to spend two nights in the detention center in Leipzig, where they were treated very badly and had their DNA taken without court order. In solidarity with this blockade LEJ wished the activists a lot of strength in the upcoming trial, which was only initiated after DHL sued them for a sum of over 1 million Euros. 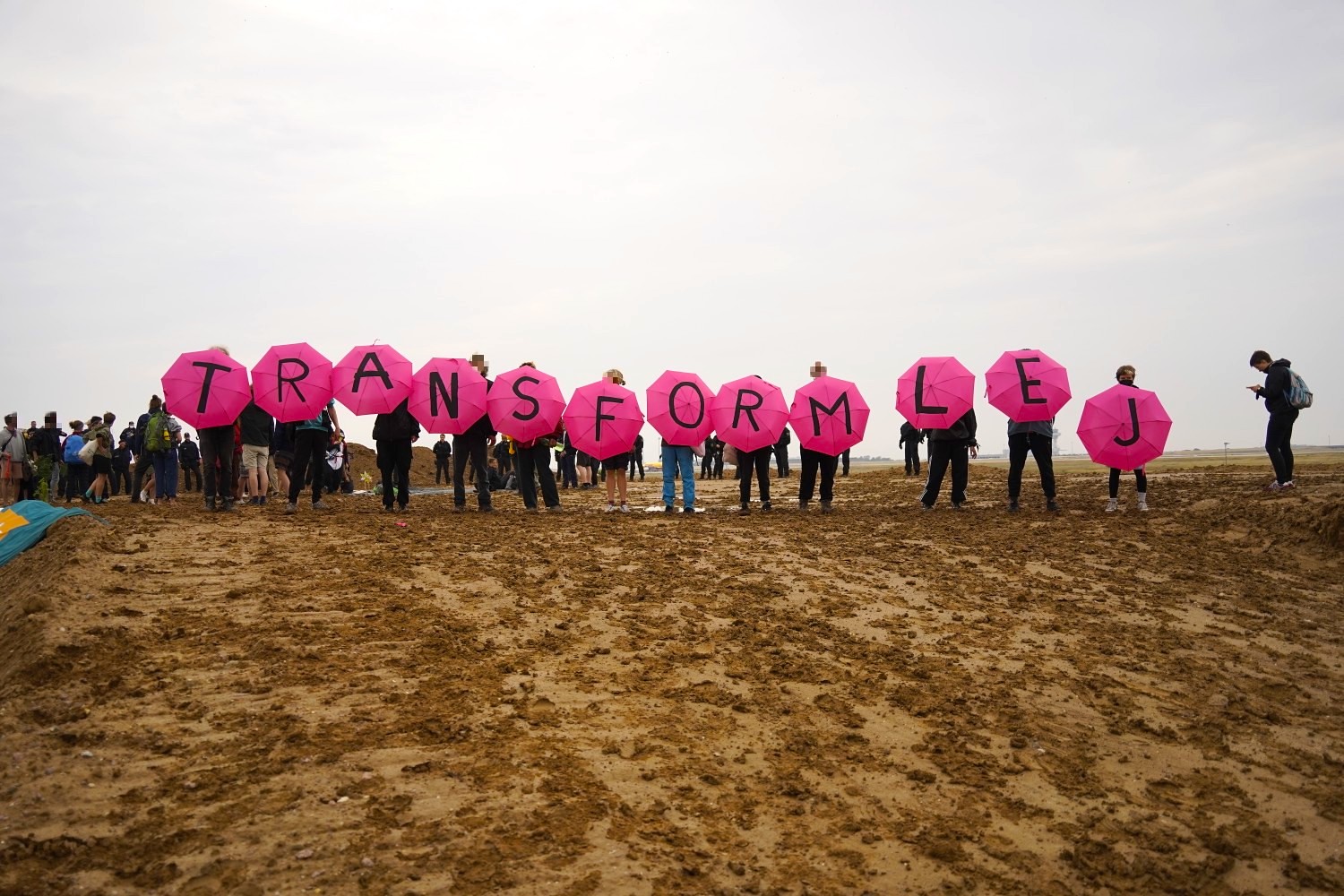 As a highlight of the action weekend a disobedient block formed towards the end of the demonstration. The group suddenly took off to run on to the foreseen expansion area where they climbed a large hill. Avoiding police lines they reached the top of the hill and unrolled large banners. They also included more creative protest elements by demonstrating what could be built on this area instead of parking spots for planes. Ideas that came up were ecological agriculture projects and solar farms. After some time, the occupiers were pressured to leave and so they walked back to the demonstration accompanied by a colorful cloud of smoke. The police once again tried to show to show their power and suddenly stopped the group because of the potentially illegal use of pyrotechnics. However, after being unable to provide a legally valid reason to detain the protesters the police let them join the demonstration again. In the meantime, two climate activists organised a spectacular action within the airport building. They climbed up in the terminal hall and put up a banner with the slogan “Transformation not expansion!“. Fortunately, during the whole weekend no people were arrested and all participants were able to celebrate the succesfull actions at the climate camp. 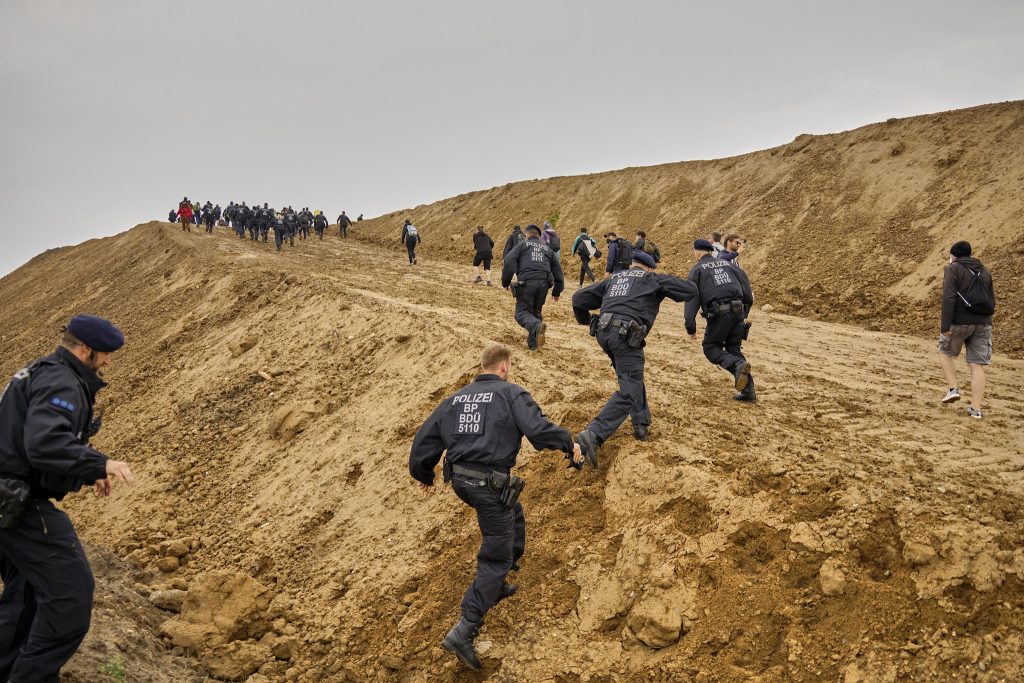 The actions this summer were the prelude to a longer struggle over the LEJ airport expansion. Transform LEJ, is committed both to climate justice and to the interests of the 10,800 people who work at the airport. The movement was also recently in touch with workers and it became clear: many employees are concerned about the climate crisis and criticize DHL, but they cannot publicly oppose it because of their dependence on this large corporation for employment. These people were promised attractive and secure jobs in some cases, but the reality is different. Jobs in the airline industry, as shown by past crises such as during the Corona pandemic are anything but secure in the light of more upcoming crises. LEJ is committed to ensuring that a transformation takes place in which new, green and meaningful job opportunities are created for working people. They are demanding that a social-ecological transition process includes the opinions and perspectives of working people. LEJ will continue to fight as long as necessary for justice.

Photo Credit: 1 & 2 Tom Richter; all other photos – am Boden bleiben

Check out this video for a recap of the action:

And see more photos of the action here: 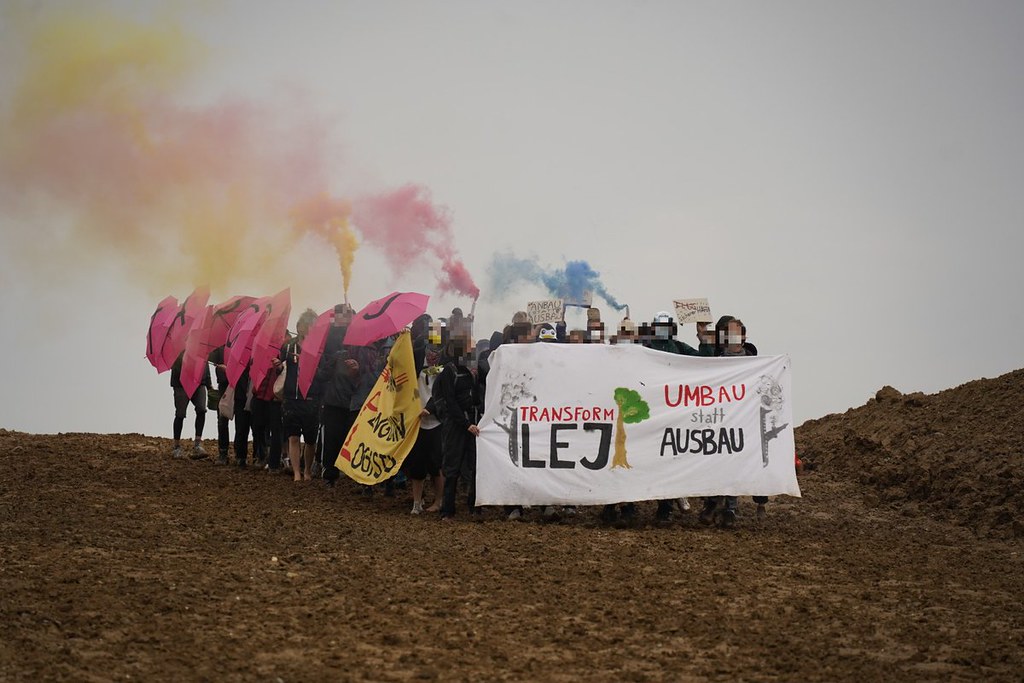