Filipino fisherfolk fighting against Bulcan Aerotropolis and wider infrastructure development, which is destroying wetland in Manila Bay, have started a mobilization called ‘Fishers Rise Up!’

20/02/2020: Bulakan, Bulacan – The Fishers Rise Up! initiative includes a series of mass protests and educational campaigns in coastal communities and elsewhere, is led by the National Federation of Small Fisherfolk Organizations in the Philippines (PAMALAKAYA), and is supported by fisherfolk advocates, environmental defenders, and climate justice groups. The activities in February will culminate in the Fishers Rise Up! Climate Strike on 24 February in Mendiola, Manila. 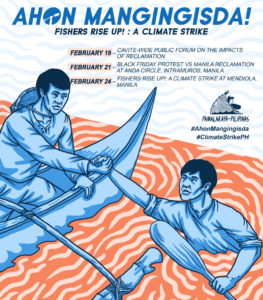 “We fishers are expert swimmers, but we refuse to accept the submersion of our communities! As people’s movements around the world are stepping up to halt climate breakdown, we fisherfolk, as a highly-vulnerable front-line community, are joining in. The seas are rising, and so are we,” explains Fernando Hicap PAMALAKAYA National Chairperson.

Amongst the first activities of “Fishers Rise Up!” was a protest in Bulakan town on January 15, the day scheduled for the groundbreaking at the new Bulcan Airport, in Manila bay, 25 kilometres north of Manila. Work on the 2,500-hectare airport and airport city complex – a kind of massive development called an ‘aerotropolis’ – is being carried out by San Miguel Corporation (SMC). It is the country’s most expensive infrastructure project to date and its six runways are expected to accommodate 100 million passengers per year. This development would more than triple the capacity of the existing main Manila airport, Ninoy Aquino International Airport.

Calling the project ‘one of the biggest environmental disasters to hit Manila Bay’, Fernando Hicap from PAMALAKAYA said the Bulacan Aerotropolis will also obliterate the livelihoods of more than 20,000 fisherfolk in Bulacan and neighbouring towns who subsist on fishing in the bay’s waters. “Contrary to claims by SMC that the project would foster development, it does the opposite by forcibly evicting hundreds of fishing families from their homes and destroying the economic value and biodiversity of the rich marine ecosystem,” Hicap explained.

Bulakan is known as one of the key biodiversity areas in the country and is a home to 22 types of mangroves including Piapi, a firm type of mangrove that serves as natural wave barrier and shelter for fish. Based on the Coastal Resource Management Project conducted by scientist group AGHAM, 670 kilos of fish catch per year will be lost for every hectare of mangrove that will be damaged.

The Aerotropolis project is part of the wider “Build, Build, Build” (BBB) infrastructure development of President Rodrigo Duterte eradicating nearly 30,000 hectares of wetland in Manila Bay. These so-called land reclamations create new land from the sea, but as they will further decrease the natural defense of coastal ecosystems they will intensify the impact of flooding and storm surges.

Hicap lambasted the programme for selling coastal waters and public lands to large developers and foreign investors: “We will oppose this grand sellout of our traditional fishing waters. None of the fisherfolk deserve to be ejected from the community, just to pave the way for an international airport and metropolis that will only benefit a few developers, particularly Ramon Ang of SMC.”

Coastal communities at the frontline of climate crisis

The forecast of rising sea levels spells disaster for the Philippines, which is composed of more than 7,100 islands. 60% of the country’s population is either directly dependent on the coastal geography for their livelihoods or living in coastal areas. A recent study by Climate Central shows that in Metro Manila the residences of 8 million families will likely be submerged by the projected sea rise of about 2-7 feet, and possibly more. The coastal population, and especially the fisherfolk who directly subsist in seas for living, bear the brunt of this looming ecological disaster. The Bulcan Aerotropolis and the extra air traffic it will attract will both add to climate breakdown and intensify the local impacts in Manila Bay. The project is thoughtless and unacceptable.

Fishers Rise Up! – ‘Ahon Mangingisda’ are the Filipino words for ‘Rise’ and ‘Fisherfolk’, constituting a double meaning: rise from the flooding, and rise against climate change.