Protest against Greenwashing of aviation

Yesterday, October 3rd, two activists from Stay Grounded intervened in the opening of the European Aviation Summit in Vienna, discrediting the speach by EU Transport commissioner Violeta Bulc about the supposedly green future of aviation.

The summit is taking place on the 3rd and 4th of October in Vienna, with European high level politicians and the aviation industry, in order to bring forward the growth of the European aviation market. Since civil society was not welcome to the conference, the direct action was the only way to raise the concerns there. “We are the young people who will have to live with the consequences of your decisions. Reducing aviation emissions is only possible by reducing aviation!” This was the message the two activists sent to the participants and the press. 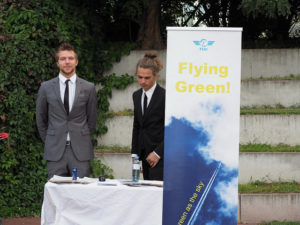 Outside the high level event, activists welcomed the conference participants handing out flyers saying “Flying Green – as green as the sky”.

The action tried to shed a light on the problematic greenwashing strategies by politics and the industry, who pretend to achieve carbon free growth of aviation through cheap offsets, biofuels and technologies that are not yet developed. It was especially directed to the EU, warning them not to give in to the current lobbying attempts by the industry to cut any existing regulation on aviation emissions (like the EU emissions trading scheme, or few ticket taxes). Instead, the activists made clear that the unfair priviledges of the aviation industry need to be cut, that a kerosene, tickets and frequent flyers need to be taxed. They also demanded a stop of the expansion plans of the Vienna airport, where a third runway would lock-in growth of the most climate harming form of mobility  for the next decades.

Find below the whole speech of Mira Kapfinger.

Greenwashing of aviation is not a solution. Flying is the fastest way into the climate crisis. Offsets and biofuels are part of the problem.

When politicians closely together with industry take harmful decisions, it is our right and our duty as civil society to interfere.

We demand you to stop airport expansion; stop the third runway Vienna; get rid of corporate power in decision making; shift flights to the railway; finally tax kerosene, tax tickets, and tax frequent flyers more than those who almost never fly.

While on a worldwide scale, few people fly, others have to bear the consequences: We, the younger generation, your children, people in the Global South already suffering from the climate crisis, and those affected by noise and health issues because of planes.

While politicians and industry inside are planning growth of aviation inside, outside people around the world are protesting. Since civil society is welcome in this conference, we didn’t have another chance but to raise our concerns here. We are part of a global movement for climate justice: System Change, not Climate Change!