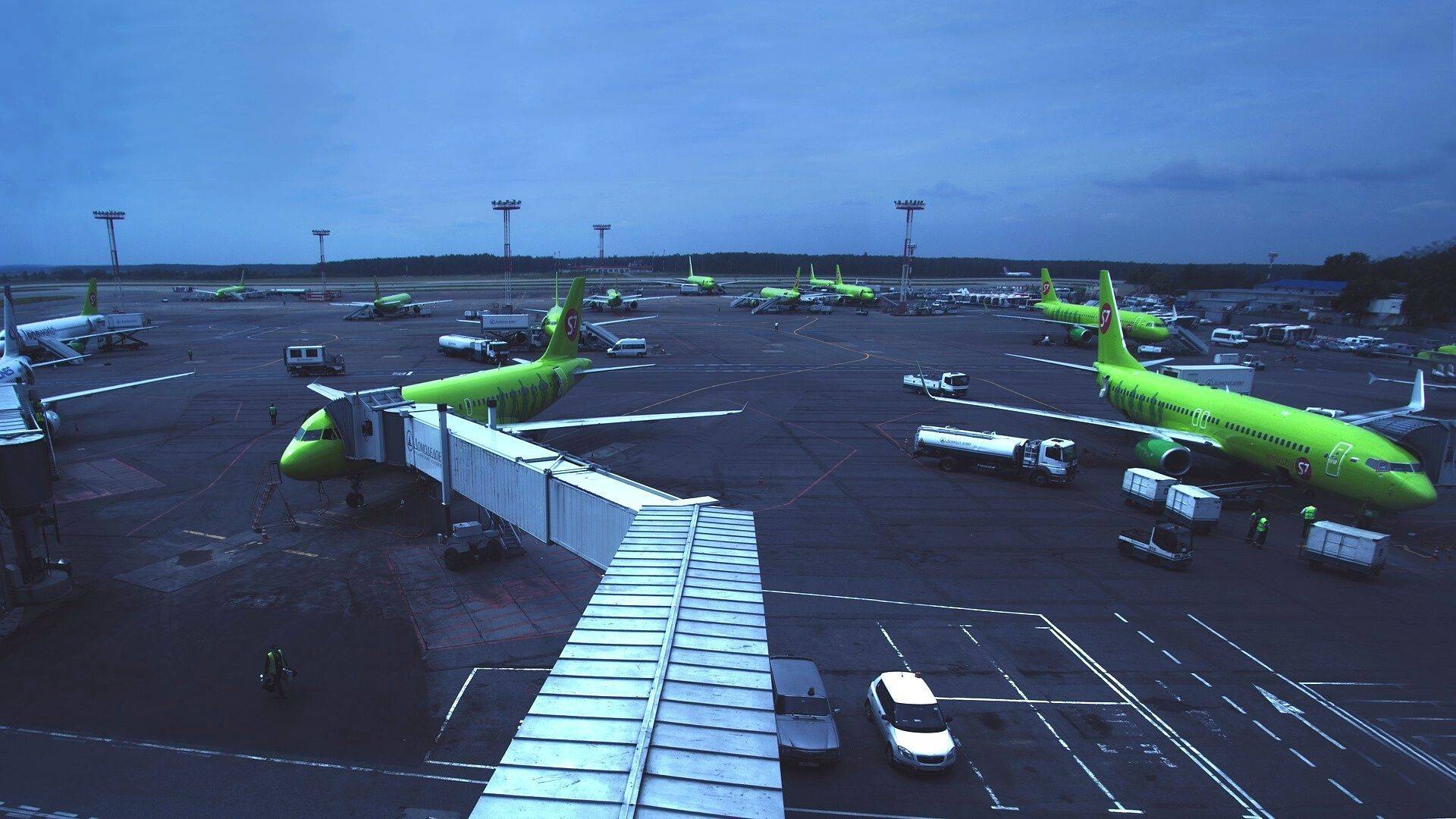 Although the Covid crisis has drastically reduced air transport, the aviation industry intends to resume the massive growth planned for the sector. Since using electric aircraft at a big scale and for long distances is unrealistic and biofuels aren’t ecologically sustainable, e-fuels (fuels made from electricity) such as hydrogen or synthetic fuels are increasingly being mentioned as the future technologies of aviation. But how realistic is it that air traffic will soon be powered by e-fuels?

The low-carbon energy of the future is renewable electricity from hydro, solar or wind. However, until now, flying with electricity is only possible for small aircrafts on short distances, because current batteries are too heavy. For flights over longer distances, electricity must be converted into fuels with processes using a lot of energy.

Two technologies are competing. Electricity can either be converted into hydrogen, which can then be used as a fuel, but this involves redesigns of aircraft cells and engines. The second option is to chemically combine hydrogen with CO2 to make synthetic fuels (“synfuels”) in a process called “power to liquid”. This can be used in mixture with kerosene or even purely by current aircraft.

The production of e-fuels is an energy-intensive process, especially for synfuels. E-fuels could theoretically be produced by surplus renewable energy and serve as storage technology in times of high wind or solar energy production. The problem is that we are far from producing enough renewable energy for the current usages of electricity like public transport. If all current (pre-Covid) flights were powered by synthetic fuels, this would consume more energy than the world’s total electricity generation from renewable sources today, leaving nothing for other sectors. 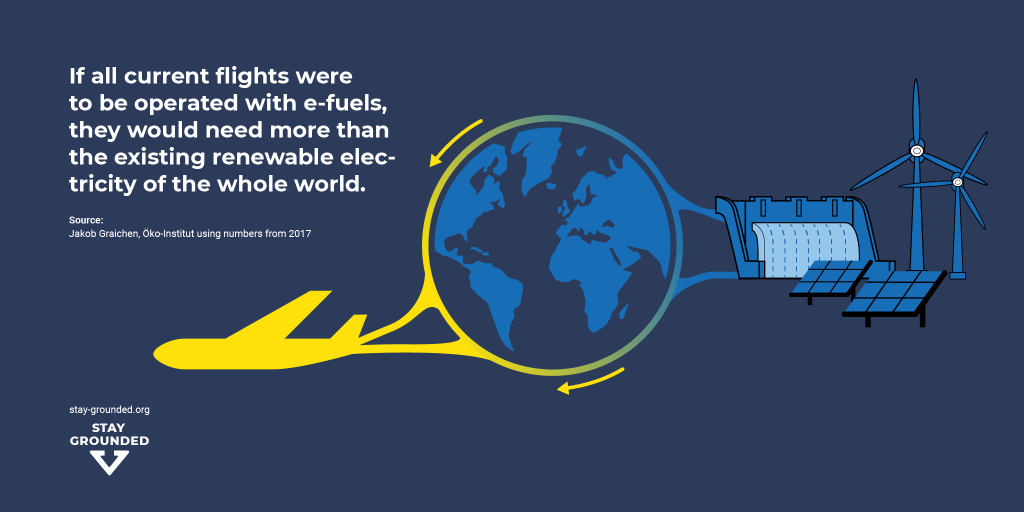 A similar picture emerges when looking at individual countries. In order to power all airplanes in Germany with synthetic fuels instead of kerosene, more electricity would be required than all currently existing green electricity plants in the country produce. This is the conclusion of the Federal Environment Ministry, according to which “at least about 270 TWh of electricity” would be needed today to replace about 10.2 million tons of fossil aircraft turbine fuel. The ministry assumes an efficiency of around 45 percent for the production of electricity-based fuels. In 2019, a total of around 515 TWh of electricity was produced in Germany for the public power supply, of which around 237 TWh was generated from renewable energies.

Moreover, airplanes do not only affect the climate through CO2 emissions when burning kerosene. Condensation trails, induced cirrus and NOx (Nitrogen oxide) derivatives have a greater impact than that of the CO2 alone. Although synthetic fuels and hydrogen might reduce these non-CO2 effects to some extent, it is far from being proven. In the end, as long as aircrafts burn fuels, they will have severe non-CO2 impacts that cannot be eliminated. An aircraft of the future with no climate impact therefore cannot be a jet plane powered with energy from combustion. 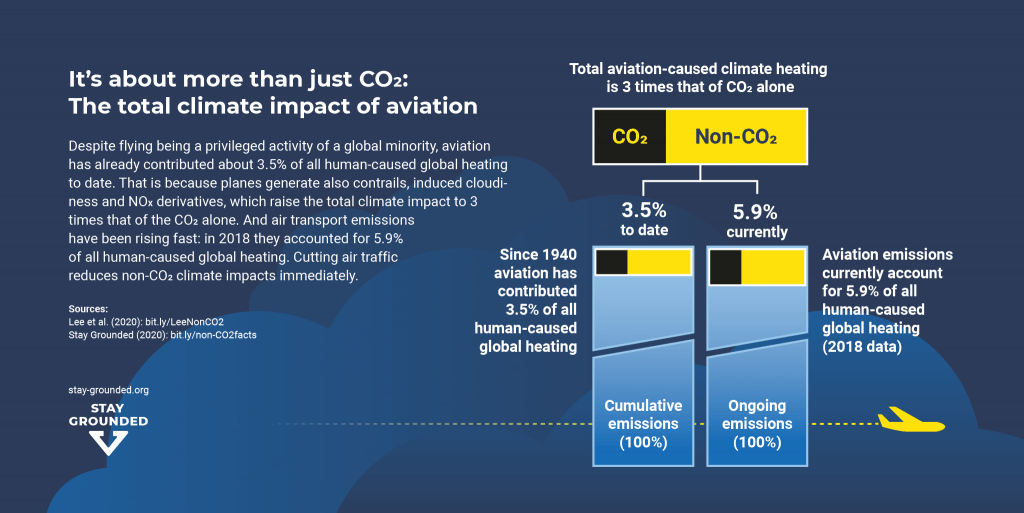 Technological climate solutions will therefore remain an illusion for air traffic levels like before the pandemic, and even more when taking into account the growth rates projected by the industry. The only way to effectively cut emissions from aviation is to reduce air transport. The only really climate-friendly plane is one that stays on the ground.

It is, however, still important to intensify and fund research and development of operational and technological improvements for the remaining flights. But this always needs careful attention: “Alternative” fuels will also have new harmful consequences if they are to be produced in high quantities and implemented with the common neocolonial methods, often involving land grabbing for supposedly green projects.

So while technological research and development is important, it cannot serve as an excuse for delayed climate action.