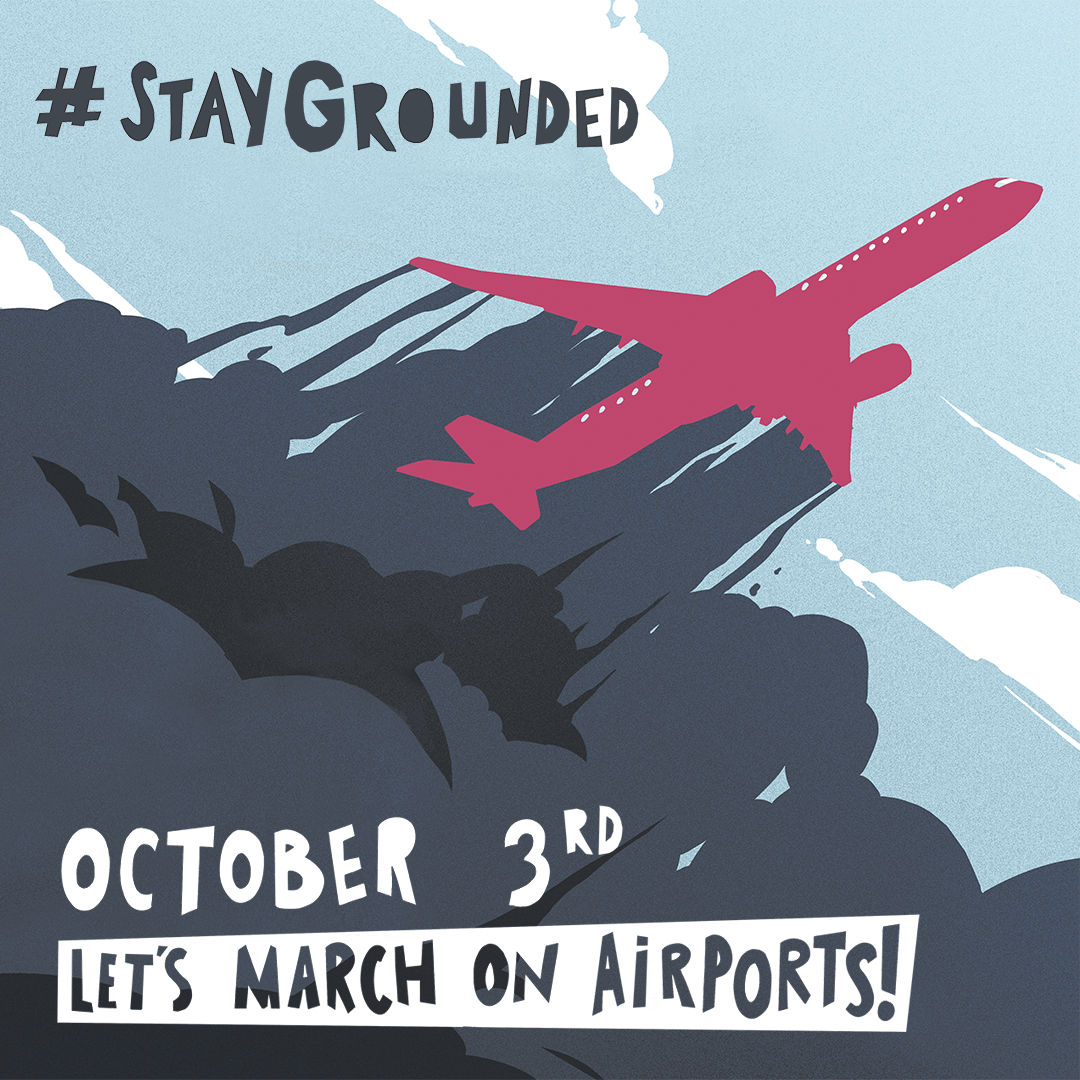 The Stay Grounded network invites groups to join the French mobilization for a reduction of air traffic and a just transition towards a climate-safe transport system.

Airlines in the European Union alone have been guaranteed an unprecedented €30 billion of government bailouts since the beginning of the Covid-19 crisis – without binding environmental conditions. In the US, a federal government US$50 billion bailout fund was rolled out, whilst Australia’s Qantas received a US$660 million bailout loan and Singapore Airlines a US$13 billion aid package. “Using public money to keep afloat an industry incompatible with the safeguarding of decent living conditions on Earth – our answer is no”, say Stay Grounded member organisations “Action non violente-COP21” (ANV-COP21) and Alternatiba. They therefore call for a march on airports in family-friendly, non-violent processions, on foot or by bike throughout France.

Acting together is our strength. Let’s join the march on airports and take the wave of action beyond French borders. If you plan to join the action day, let us know via info[at]stay-grounded.org (" target="_blank" rel="noopener noreferrer" download>pgp key)! We can then include you into the visualisation of all actions taking place and into our communications relating to the action day. If your group is based in Europe, you might want to consider if your action also fits to the Climate.Care.Uprising! and register it there as well. You can also apply for our Flexible Action Pot if you need funds for your plans. Learn more!

Translation of the French call

The French original was published on July 10, 2020 by ANV-COP21 and Alternatiba

On Saturday October 3, we will march on airports, with determination and non-violence, for the reduction of air traffic and the transformation of this sector, in solidarity with the employees who are suffering a social crisis due to poor political choices.

The COVID-19 crisis has grounded planes like never before. This situation, necessary to stop the spread of the virus, has dealt a terrible blow to the whole of the aeronautical industry and its employees.

The French government has granted billions of euros to revive the sector, but without a single ambitious condition to protect either the climate or jobs. Despite their failure to meet even their already insufficient ecological commitments, the country’s leaders, and those of the major aeronautical companies, are thus allowing themselves to continue their headlong rush towards climate and social chaos. Air transport is already responsible for at least 5% of global heating – as much as a country like Germany – and hopes to grow even more.

The management of companies in the aviation industry, and in particular Air France and Airbus, are already announcing the loss of thousands of jobs, despite massive state aid payments. While counting on the endless growth of traffic, and on hypothetical technological innovations, the managers of these companies are endangering both the position of their employees and of our entire ecosystem, supported by the complicity of political leaders.

The lock-down period has shown that public authorities are able, when necessary, to bring about a quick and drastic reduction of air traffic. Yet climate breakdown is an even more serious danger than the current health crisis. Relaunching the aviation industry, while allowing low-carbon transport such as trains to decline, are two political errors with dramatic consequences.

And so we clearly state the following: using public money to keep afloat an industry incompatible with the safeguarding of decent living conditions on Earth – the answer is no. Suggesting that ecologically responsible aviation is possible in the coming decades – our answer is no. Jeopardising the future of all the employees in the aeronautical sector – the answer is no.

On the other hand, it’s a resounding “yes” to supporting aviation workers, to organising with them the reconversion of the industry towards low-carbon transport systems, to taking into account the local residents who suffer the consequences of the aviation industry, and to rethinking collectively our travel needs on a society-wide scale.

For the future of us all, we will march on airports

We have a historic opportunity to make the right choice. There are many possible measures: stopping domestic that are feasible by train; abandoning airport expansion projects; taxing kerosene; guaranteeing workers’ jobs and supporting the sector’s reconversion: redirecting public subsidies (especially the current subsidies to regional airports running at a loss and low-cost companies) towards the development of alternatives, in particular trains, which 81% of French people would like to see

Our government, however, is not making this choice. So let’s make our voice heard: on Saturday, October 3, let’s march on airports! In colourful and determined processions – family-friendly and non-violent – on foot or by bike, we will march on the major city airports, on regional airports, on private jet airports… Traffic will be severely disrupted, so we are making this announcement today in order that everyone can make arrangements and not plan a flight on that day.

This day of action will be an opportunity to get our message across: we do not want to suffer the dramatic consequences of climate inaction; we want to preserve the health of all and the living conditions of present and future generations. Now is the time to choose to reduce air traffic and to transform the transport sector!