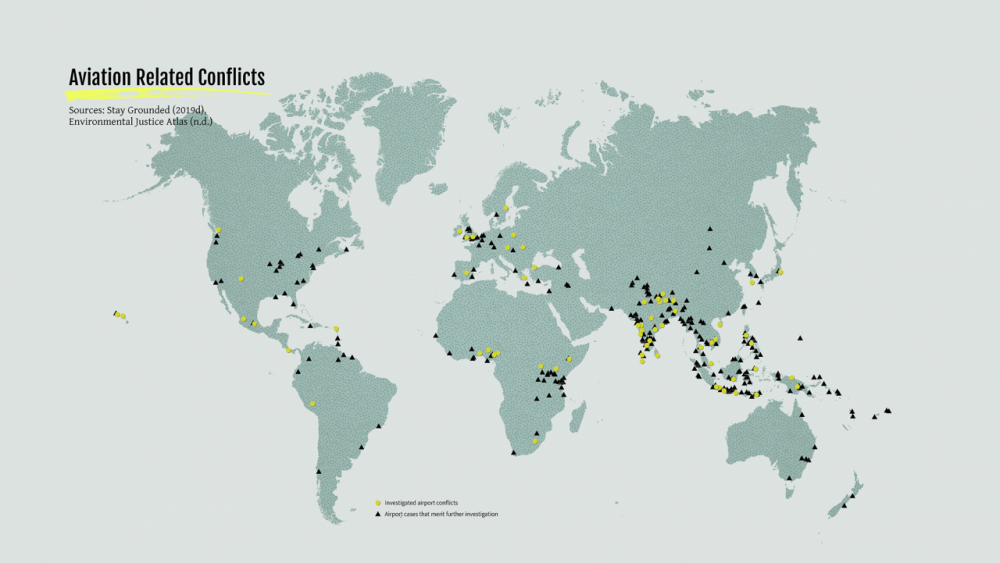 Socio-environmental conflicts are a collective manifestation of discontent, when people organize themselves against situations regarding not only unequal distribution of environmental benefits but also unequal distribution of the environmental damages. More than 300 such conflicts related to the expansion or creation of new airports or aerotropolis were mapped in research with 67 in-dept case studies in collaboration between Environmental Justice Atlas and Stay Grounded. Our webinar gave an overview on the research and the diversity and patterns of airport conflicts, as well as and three specific cases from Sout-East-Asia. It also touched overall lessons learned from the cross-case analysis and how to contribute to the mapping process.

Sara Mingorría (EnvJustice, Autonomous University of Barcelona, ICTA-UAB) presented the Environmental Justice Atlas mapping project which was established to co-produce knowledge about environmental conflicts between academics and activists. The map includes an own layer for airport conflicts. Mingorría gave an overview over results from the analysis of their conflict data-base: Since 2010, airport conflicts are increasing. Whilst conflicts in Europe are on the rise, the majority of conflicts are currently taking place in Asia. It is therefore very suitable that the three cases presented in the webinar all come from this region. 30% of the examined projects are promoted for touristic reasons, an equal share is planned as post disaster relief. The main issue of protest is land rights, but also other issues like (climate) justice. 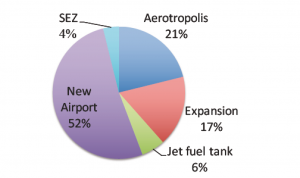 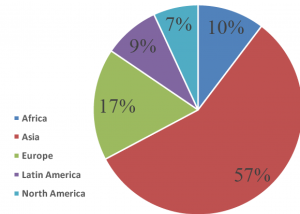 In her presentation, Rose Bridger (Stay Grounded/ Global Anti-Aerotropolis Movement), major contributor to the mapping and research, gave glimpses on the devastating dimensions of airport conflicts around the world. The key issue in the majority of the cases is land acquisition. Allocation of large sites, often farmland and fishing grounds, threatens entire communities to loose their homes and livelihoods, such as for the Ogun Cargo Airport in Nigeria. Especially land-right violations and evictions are often met with strong resistance eg. against the New Yogyakarta International Airport (Indonesia). Examples for passenger-oriented airport projects aiming to increase tourism, are Chinchero Airport (Peru) already under construction or Navi Mumbai Airport (India) aiming at incredibly 60 million passengers per year. Showcasing the increasing trend of ‘aerotropolis’ or airport cities are projects such as Nijgadh Airport (Nepal), a second airport on Jeju Island (South Korea) and New Phnom Penh Airport (Cambodia). Double climate damaging are airport projects directly related to fossil fuel extraction, eg. Komo Airfield (Papua New Guinea) built specifically for delivery of equipment for the ExxonMobil led liquefied natural gas (LNG) project. Even during the Covid-19 pandemic such projects are being continued, eg. Afungi airstrip (Mozambique) for LNG extraction, which was also a regional centre for the COVID-19 outbreak.

Bhola Bhattarai (National Forum for Advocacy, Nepal – NAFAN) shared in his presentation the overwhelming consequences of the planned Nijgadh Airport and Aerotropolis: The project located in the Bara District in southeastern Nepal would cover an area of 8046 hectares, threatening over 2.4 million trees. The planning is undertaken without consultation or prior and informed consent of the communities affected in the Tangiya Basti settlement (7,500 people facing displacement) and endagers Tharu indigenous peoples’ traditional cultural values as well as the livelihoods of 600,000 members of local collaborative forest users. The project area adjoins the Parsa National Park and lies on the main route of wild elephant movements as well as on a large aquifer and water supply for an estimated 1.2 million people. NAFAN engages in various forms of organizing against the project: practicing civil disobedience (Chipko), publishing and disseminating information about the project, especially also to affected communities, leading consultations in the project area, and holding protests, press conferences and meetings with political representatives. A public interest litigation is currently ongoing and will continue after the COVID-19 lock-down.

Sandeep Shinde (Karad Airport Expansion Opposing Task Force), a contributor to the mapping of the conflict, gave an insight into the almost decade long resistance against the planned expansion of Karad Airport. From 2011 onward, right after the announcement of the planned airport expansion, affected farmers have been protesting. 3,200 acres of fertile land and the livelihoods of about 25,000 people are under threat, since an irrigation scheme built by the small-scale farmers will be destroyed by the project. According to Shinde, local residents will not profit from project, it serves only the interest of builders and politicians and land is being acquired illegally. In 2011, 95% of the affected farmers voted against the project. Their protest, including several sit-ins, is a struggle for live. There is no need for the airport, the agricultural products are used locally, sugar which is produced for export can be transported by existing railway and highway connections. The government recently acquired 100 hectares of land on paper for the expansion. The acquisition process however was halted because of the international pressure through open letters sent to the Prime Minister of India and local authorities on behalf Stay Grounded. In the most recent protest, from July to September 2019, affected farmers staged a sit-in for 50 days and nights in front of the Satara Collector office, sacrificing their agricultural work and family responsibilities to stop the land acquisition.

Success story from the Maldives: Save Fainu

Adam Isham (Save Maldives) presented the successful civic campaign against the planned airport on Fainu Island, located on the Raa Atoll. In May 2018, Island Aviation Services – owner and operator of Maldivian, the government-owned largest carrier in the Maldives – received the contract to develop and operate the airport. One of the largest hospitality companies and resort operator in the Maldives, Universal Enterprises, was proposed to finance Fainu Airport through a bulk purchase of advance sales of air tickets. The project was designed to cage away the 466 people living and farming on the island from their access to natural resources: 31 hectares of land, mostly used for agriculture and 2.18 kilometres of beach would have been lost to the island community in favor of the airport’s gated security zone and an adjoining hotel. The next existing airport could be reached by a 25 minutes speed boat ride. Hence the project was not necessary for local transportation and just designed to serve the tourism industry, airport developers. Political parties used the project plans to advocate to their political crowd in the midst of the Maldivian election campaign. Construction was scheduled to begin in August 2018. Save Maldives and others mobilized as civic movement against the project: petitions were filed and submitted to the tourism ministry, the project developers, and the Environment Protection Agency (EPA) in July 2018. Public demonstrations and street protests were held, #SaveFainu trended on social media and the topic received much media attention. The Environmental Impact Assessment for the project was finally rejected by the EPA in November 2018. The new government decided not to proceed with the construction plans. Meanwhile the new government started developing other questionable airport projects in HA. Hoarafushi, SH. Funadhoo, LH. Madivaru, GD. Maavarulu, and GDH.Faresmaathodha – in addition to the already existing 20 airports on the Maldives.

Rose Bridger highlighted some other inspirational success stories of resistance such as the stop of the airport projects in Nantes (France) and Aranmula Greenfield Airport (India), the victorious protest against the destruction of the Arial Beel wetlands (Bangladesh) or the partial success of reaching compensation and recognition of customary land rights for communities affected by Sentai Airport (Indonesia).

During the discussion several key questions for a organizing strategically against airport projects were identified: Who is consulted? Did communities give their prior and informed consent? How can information reach those affected by the project? Who profits from the project and who suffers? Who in the region can actually afford to fly? How is the project financed? Which political actors and companies are involved? What are moments of mobilization (eg. election campaigns)?

Sara Mingorría concluded that 39% of the analysed cases, the resistance was seen as (partially) successful by the project opponents because of growing resistance, achieved compensation, moratoria or cancellations. In the vast majority of success stories (80%) the resistance had begun ahead of project/construction start. This makes a strong case for preventive organizing. In all three case studies presented in our webinar, the resistance started to organise ahead of construction, which gives some reason for hope for the two struggles that are still ongoing.

The team encouraged everyone to join and participate in adding and updating cases to the airport conflict map. Get in contact at: mapping[at]stay-grounded[dot]org