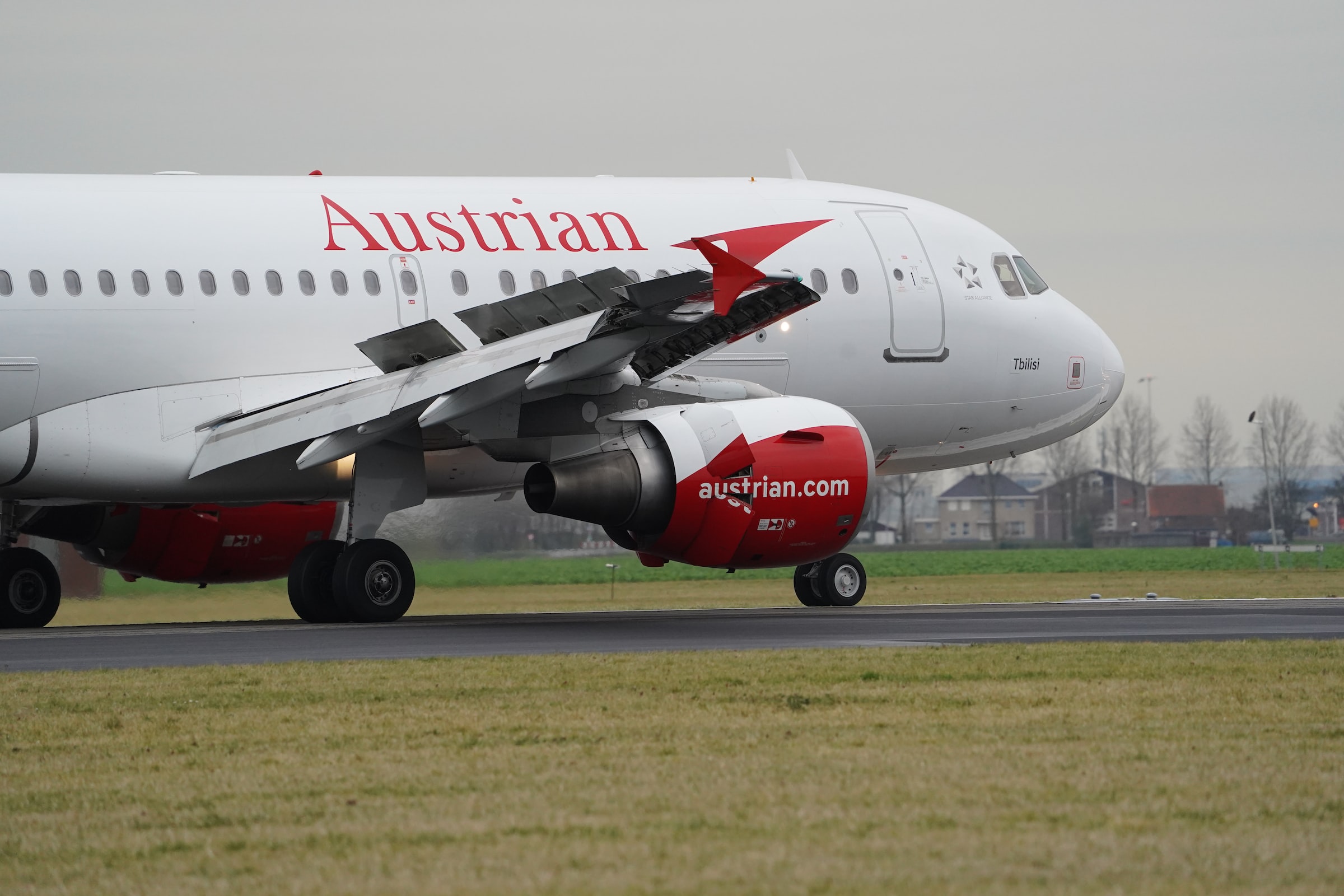 Rotterdam/Vienna – 29.08.2022 – This summer, Austrian Airlines launched an online advertisement promoting a “CO2-neutral” flight from Vienna to Venice to visit the world-famous Biennale art fair, using a slogan that can roughly be translated as “Flying CO₂-neutral to the Biennale? No problem for us”. The Austrian airline claimed that this was possible by using 100% Sustainable Aviation Fuels (SAF). 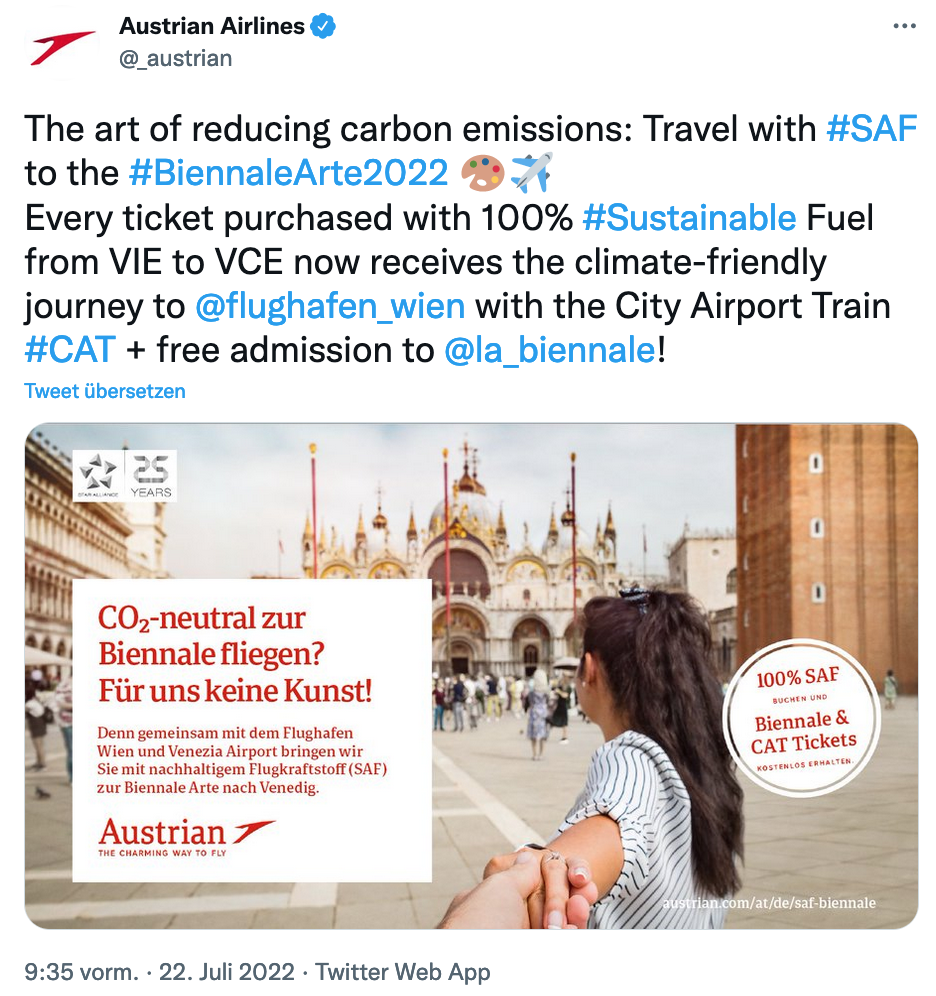 Eric Stam, a lecturer for aviation professionals in Rotterdam, Netherlands, found it misleading and thus filed a complaint with the Austrian Advertising Council. Given the nature of Stam’s profession, he knew this claim was false:

“Austrian Airlines uses agrofuels and that fuel itself is not CO₂-neutral. Not in theory and not in practice. Austrian Airlines thought it could solve this with overcompensation. That is a clever accounting trick, but I argued that this is not understandable for an average consumer. The advertisement suggests that SAF itself is carbon-neutral and the words ‘100% SAF’ implies that only SAFs are used for the flight. That is why I argued that the term Sustainable Aviation Fuel is not sufficient here: the consumer has the right to know what fuel it is and what net CO₂ reduction is possible with it. It is very misleading to suggest that CO₂-neutral flying is possible by means of fossil fuel substitutes like the ones used by Austrian Airlines.” argues Stam.

The Austrian Advertising Council agrees with Stam’s claim and has deemed the advertisement in question as misleading consumers into believing the advertised flight is CO2-neutral. Moreover the majority of the Council found that this ad does not meet the Code of Ethics standards of the advertising industry.

“In times when sustainability and climate protection are given special attention by the population, transparent, clear and sensitive communication is particularly needed. Since the subject could be misleading with regard to climate-neutral flying, but is not (yet) possible, a more sensitive design and, above all, more precise formulation regarding the advertising subject is recommended.” reads the decision by the Austrian Advertisement Council.

Austrian Airlines is part of the Lufthansa Group and all of its brands are aggressively promoting so-called ‘CO2-neutral flying’ through reforestation projects, using fossil fuel substitutes or a combination of these. The suggestion that it is possible to fly without climate damage is extremely harmful because it perpetuates the illusion that we don’t need to change our mobility systems and reduce aviation demand.

“Those greenwashing attempts by airlines are marketing stunts to give consumers the impression they are not perpetuating the climate catastrophe with their flights. The only way to bring down emissions from flying quickly enough to stay within the 1.5 degree limit is to reduce aviation. Instead of passing on the responsibility to consumers, we need political measures to bar the greenwashing, reduce aviation and foster sustainable mobility.” argues Mira Kapfinger, Co-Founder at Stay Grounded.

The ruling will be anxiously studied by airlines worldwide, especially since claims against misleading advertising in the aviation industry are gaining momentum. In July, KLM was the first airline in the world to be sued for misleading advertising by Fossielvrij NL in collaboration with Reclame Fossielvrij and Client Earth. Advertising for fossil fuel substitutes, so-called SAFs, also played a role in that lawsuit.

—
Further information
Complaint and decision of the Austrian Advertising Council: https://werberat.at/beschwerdedetail.aspx?id=7374
European Citizen Initiative to ban fossil fuel ads: https://banfossilfuelads.org/
French study showing how “waste oils” such as used cooking oil, Austrian Airline claims to use, lead to biodiversity destruction and increase demand for palm oil: https://stay-grounded.org/flying-with-biofuels-destroys-biodiversity/
Case Study Omega Green Agrofuel refinery: https://stay-grounded.org/agrofuel-case-study/
—
About
Eric Stam is a lecturer at Rotterdam The Hague Airport College and was previously successful in the Netherlands with two complaints over KLM advertisements on the use of biofuels and CO₂ neutral flying. He has also won two other complaints against two local Dutch airports and the German airline Green Airlines.

Stay Grounded is a global network representing more than 190 member organisations campaigning for a reduction of air traffic and a climate-just mobility system, including local and national airport and climate campaign groups.